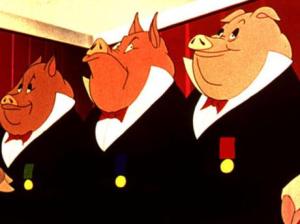 Speaking the truth can be a dangerous undertaking. It can expose the speaker to all sort of chastisement. This isn’t only so in any given country’s domestic affairs but very much so in relations between states.

Ours, after all, is a globalized reality. This fact can induce and intensify inordinate hubris in some leaders with pretensions to hold sway over more than their own specified domain. White House occupant and Nobel Peace Prize laureate Barak Obama, for instance, often conducts himself as if the American electorate and the Nobel committee had put him in charge of the whole earth.

Had Obama been an unqualified success, his conceit may be suffered but his isn’t and he doesn’t like to hear that he isn’t.

Despite his resplendent liberal credentials, Obama’s concept of liberty is a tad constricted. Everyone – everywhere on the face of this planet and beyond – is perfectly free to go into raptures over him but it’s a whole different opera when not-so-flattering opinions are sounded.

Ashton and Zarif in Tehran recently

Just about the only semi-newsworthy report to have emerged out of the latest round in Vienna  of negotiations on Iran’s nuclear project is the fact that Iranian foreign minister Muhammad Zarif had cancelled a dinner date with EU foreign policy chief Catherine Ashton.

Viewed against the presumed big picture this is a negligible item, bordering on preoccupation with idle incidentals. Yet, as such, it’s highly significant. It almost goes to show that there’s really no big picture. Supposed talks with Iran continue sporadically and constitute the pretext for alleviating sanctions on the rogue regime’s nuclear ambitions. But in effect, nothing is happening. END_OF_DOCUMENT_TOKEN_TO_BE_REPLACED 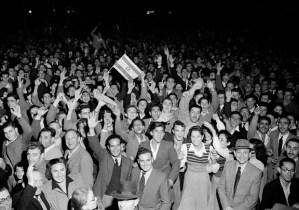 Tel Aviv, November 29, 1947 – Untenable and implausible though this hodgepodge partition was, Jewish multitudes rejoiced in the streets

It’s a huge relief to realize that US Secretary of State John Kerry doesn’t share the postmodern contempt for history. Or at least so it seems, because when it suits him, Kerry resorts to instructive historical perspectives. Wowed by his superior wisdom, in all its wondrous and infinite manifestations, we’re humbly thankful for the cogent connections he makes.

Just last week he intimated that Israelis have become insufferable nudniks by harping on what evidently cramps his style – that tedious demand that the Arabs recognize the fundamental legitimacy of Israel as the nation-state of the Jewish people.

“It’s a mistake for some people,” he told the House Foreign Relations Committee without naming names, “to be raising it again and again as the critical decider of their attitude toward the possibility of a state, and peace, and we’ve obviously made that clear.” END_OF_DOCUMENT_TOKEN_TO_BE_REPLACED

Military medics treating one of the Golan attack victims

Hezbollah is the culprit that most readily comes to mind when trying to figure out who masterminded the roadside attack on IDF soldiers in the Golan last Tuesday. Hezbollah’s motivation is obvious following the destruction of its missile transports into Lebanon.

Not only has it vowed revenge but its ally, embattled Damascus despot Bashar Assad, has served ample warning that from now on he won’t bar Hezbollah forces from striking against Israel from the Golan.

With that in mind, the detonated booby-trap device (and possible kidnap attempt) was no surprise. END_OF_DOCUMENT_TOKEN_TO_BE_REPLACED 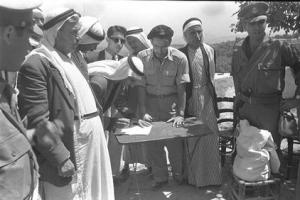 Umm el-Fahm leaders sign declarations of allegiance to Israel on May 20, 1949 after the Lausanne Conference Awarded the Wadi Ara region to Israel

One outrageously insolent remark was remarkably ignored in the hullaballoo generated by US President Barack Obama’s Bibi-bashing interview on the eve of Prime Minister Binyamin Netanyahu’s latest White House visit.

Wedged into the presidential malarkey was a new allegation against the Mideast’s sole democracy. Obama accused Israel of no less than continuing to “place restrictions on Arab-Israelis in ways that run counter to Israel’s traditions.”

Huh? Really? What restrictions? And does Obama now also presume to pass judgment on what are indisputably our domestic affairs? Is there no limit to his meddling and hubris? END_OF_DOCUMENT_TOKEN_TO_BE_REPLACED 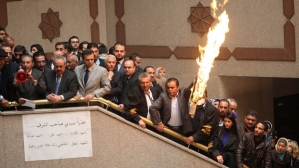 Unfortunately, not many Israelis recall that today is the 17th anniversary of the Naharayim massacre in which a Jordanian soldier cold-bloodedly massacred seven Israeli schoolgirls.

Yet that unspeakable crime is bizarrely, almost obsessively, remembered in Jordan and there it has oddly just made the headlines again – but not in the way Israelis would readily imagine.  END_OF_DOCUMENT_TOKEN_TO_BE_REPLACED

It’s not often that when a defendant is sentenced to do time behind bars he exclaims jubilantly. But that’s precisely what happened last week when Islamic Movement Northern Branch leader Sheikh Raed Salah – an Israeli-Arab, former mayor of Umm el-Fahm and a convicted Hamas collaborator – was handed down an eight-month term for inciting to violence in 2007.

Salah had then orchestrated riots against archeological rescue-digs and a new pedestrian bridge near the Temple Mount. He accused Jews of “eating bread dipped in children’s blood.” He praised and eulogized terrorist murderers. He threatened anyone who claims any Jewish connection to the Western Wall, “even to just one stone.” Thereafter, Salah has been regularly holding “Save al-Aksa” rallies dedicated to the incendiary calumny that Israel is out to demolish the Muslim compound atop Temple Mount.

His ultra-light sentence inspired him to shout insolently in open court: “Blessed is God – I got off cheap!”  END_OF_DOCUMENT_TOKEN_TO_BE_REPLACED

Most German publications no longer even pretend any wariness about coming off as anti-Jewish. Gone are the days when Germans had to at least appear a tad more cautious than their fellow Europeans. The latter reverted quickly enough to their old Jew-baiting habits but the Germans have willy-nilly caught up.

A cogent example is being consistently provided by Munich’ s left-liberalSueddeutsche Zeitung, which also happens to be Germany’s largest broadsheet daily. It recently featured a cartoon lampooning Facebook founder and CEO Mark Zuckerberg after his outfit had acquired WhatsApp. The idea was to show Zuckerberg as a voracious octopus that swallows up everything around it. The caption at the bottom left-hand corner of the cartoon clearly read “Krake Zuckerberg” (German for Octopus Zuckerberg.) Up to this point, it’s tolerable criticism.

But the octopus, as drawn by cartoonist Burkhard Mohr, was also given quite a distinctive face. Its function, presumably, was to make sure we don’t lose sight of the fact that young Zuckerberg – innovative enough to have given the world a social network which millions of Germans also use – is a Jew. To that end, Mohr portrayed him with a preposterous hook-nose and thick fish-lips – as per the freakish stereotype sinisterly ascribed to Jews by their tormentors. END_OF_DOCUMENT_TOKEN_TO_BE_REPLACED

Ultra-popular in cyberspace these days is a cartoon showing Vladimir Putin as a shrewd strategist executing moves on a chessboard, while a laid-back Barack Obama incongruously plays a single checkers piece and yells “Bingo!”

We may agree or disagree with this depiction but such is the widespread perception of the Ukrainian crisis and the invasion of Crimea. The Russian leader is regarded as having handily outmaneuvered the American president and with him the entire West. END_OF_DOCUMENT_TOKEN_TO_BE_REPLACED