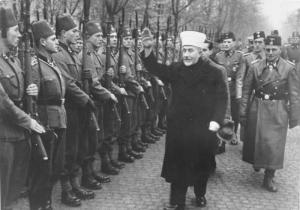 Not all left-wing foreign troublemakers were barred from this country during the recent “flytilla.” Many agents provocateurs recurrently trickle in, among them rabidly anti-Israel activists in the International Solidarity Movement (with the Palestinians). Yet others enter boldly via the wide-open gates of the Law of Return because they are Jews. My cousin, whom I’ll here call Ned, is one of them. His story is of broad interest because he’s not alone.

Ned recently arrived from the US under immigrant status, though he himself probably has no clue how long he’ll stay. He isn’t employed anywhere and has no visible means of support. Someone is footing his bills. But someone always has because, to the best of my knowledge, Ned has never held any job long-term and never forged any career. There must be an organizational benefactor but I can’t say for sure.

Ned and his brother are both products of American Hashomer Hatza’ir inculcation and both remain radically tied to that pro-forma Zionist-Marxist youth movement (even though both are now thirty-something). They seem unable to outgrow the evidently addictive juvenile connection. END_OF_DOCUMENT_TOKEN_TO_BE_REPLACED 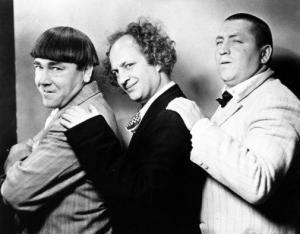 It’s official. A brand new Three Stooges remake is well under way. The sequel stooges have just banded together in a mutually advantageous alliance to fortify the governing coalition of the Jewish state – the ultimate setting to best suit their zany misadventures. For one thing, it’s quite compatible with the ethnicity of the original trio – brothers Moe and Curly (born Horwitz) and Larry who was a Feinberg.

But more important is the fact that there’s nowhere like Israel’s madcap political arena to accentuate the knucklehead anarchic antics of the jerks-of-all-trades (as yesteryear’s screwballs dubbed themselves). With them around there’s never a dull moment. They keep unsettling all and sundry, themselves foremost.

Stepping into Moe’s shoes is Binyamin Netanyahu even though he doesn’t sport a soup bowl haircut and even if he hasn’t exactly been poking at politicos’ eyes, whacking sidekicks with skillets and crunching the noses of cronies with neurotic, hyperactive zest.

Tied to him by a symbiotic fraternal attachment is Ehud Barak, playing the petulant, unpredictable and smugly self-satisfied Curly. It doesn’t matter that Barak doesn’t shave his head. He commands plenty of other attributes to qualify him for the role of the rotund buffoon, not least his pretentious parading as a key player in seeming oblivion of the fact that he has entirely lost his political power base. That in itself makes Barak as obviously unmindful of his ridiculousness as the originator of the trademark chuckle, underscored by the inevitable: “Nyuk, nyuk.” END_OF_DOCUMENT_TOKEN_TO_BE_REPLACED 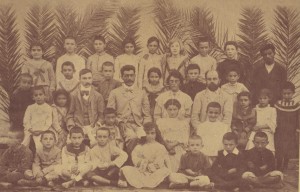 Back in 1942, George Orwell pointed out matter-of-factly that “so-called peace propaganda is just as dishonest and intellectually disgusting as war propaganda. Like war propaganda it concentrates on putting forward a ‘case,’ obscuring the opponent’s point of view and avoiding awkward questions. The line normally followed is ‘those who fight Fascism become Fascist themselves.’”

Just substitute “terrorist” for the “Fascist” or “Nazi” in Orwell’s text.

We have no way of telling whether said text was perused by Zeev Degani, current principal of Gymnasia Herzliya (the Herzliya Hebrew Gymnasium, or in its Hebrew moniker, HaGymnasia HaIvrit Herzliya). If he didn’t read this particular Orwell essay in the Partisan Review, Degani should.

Orwell was intrigued by the “psychological processes by which pacifists who started out with an alleged horror of violence end up with a marked tendency to be fascinated by the success and power of Nazism.”

“Even those who don’t,” he wrote, “imagine that one can somehow ‘overcome’ the German Army by lying on one’s back” and they shun “discussion of what the world would actually be like if the Axis dominated it.”

Sound familiar? It should. END_OF_DOCUMENT_TOKEN_TO_BE_REPLACED 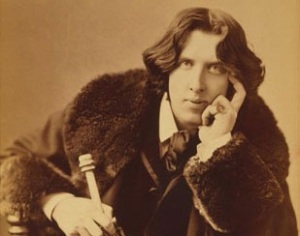 We can only speculate about whether Meir Dagan, ex-chief of Mossad (counterpart to America’s CIA), and Yuval Diskin, ex-chief of Shin Bet (counterpart to America’s FBI), are at all conversant with Oscar Wilde’s wit. Unfortunately, we’ve no way to evaluate their erudition. But on the off chance that they’re better- read than the average honcho, we might ponder whether they subscribe to Wilde’s insight that “the only thing worse than being talked about is not being talked about.”

Wilde’s dictum might go a long way to accounting for Dagan’s and Diskin’s otherwise inscrutable gabbiness, which might be no more than the product of an apparently uncontrollable urge to generate headlines. This may be in keeping with a local penchant alluded to by the colloquial Hebrew catchphrase for volubility: larutz lesaper lakhevreh. It roughly translates to “run and tell your friends.”

But that may be no more than an intricate ruse they want us to fall for. Their hypothetical nothing-is-what-it-seems hoax could be in keeping with the Hebrew semi-slang idiom hafuch al hafuch – literally “opposite on opposite”– i.e. not what you expect, the opposite of what you assume, creating an impression that’s the opposite of what immediately looks likely.

Both the above pearls of our insular culture may contain some relevance to putting Dagan’s and Diskin’s spasms of loquaciousness into some semblance of context. END_OF_DOCUMENT_TOKEN_TO_BE_REPLACED