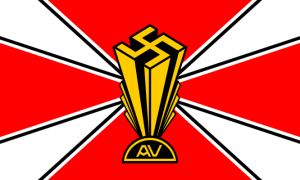 The flag of the German-American Bund, where the swastika is featured unabashedly.

Britain is gobsmacked. Its TV screens feature seemingly stricken Muslim parents, from urban hubs like Cardiff, denying any responsibility for or knowledge of their sons’ escapades in bleeding Syria.

Their moaning is indispensable to a novel storyline that’s fast gaining resonance in Europe’s insincere political-correctness and Orwellian Newspeak. It’s subtle but nevertheless significant. It’s about “Europeans who have been to Syria,” have emerged therefrom somehow tainted with extremism and might thereby become, a tad unexpectedly, dangerous.

Yes, a newfangled brand of terrorist seems to have suddenly surfaced in Europe’s pleasant lands but polished European manners prohibit us from characterizing him as Arab or Muslim.

That kind of serves to clear the numerous Islamic radicals who proliferate throughout the continent. The problem has thus been instantly dwarfed and quasi-sanitized. It involves only specific numbers of Syrian civil war combatants/veterans, now identified broadmindedly only by whichever European passport they carry. END_OF_DOCUMENT_TOKEN_TO_BE_REPLACED 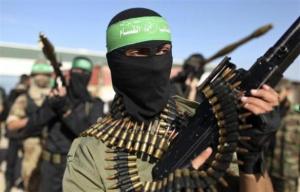 Don Mahmoud Abbas’s feelings have been deeply hurt. Three Israeli boys fell prey to Hamas abductors who set out from his turf and retreated back to it. But how dare insensitive Israelis insinuate that the Godfather is tainted by his pact with the most infamous ringleaders of Hamastan’s Murder Incorporated and its offshoots?

Cut to the quick, Abbas swears he’s merely in league with “professional experts.” Sure he does. No mafia godfather is likely to spill the beans on his “understandings” with affiliate mob families. Hence Abbas’s pseudo-condemnation of the boys’ abduction, his make-believe ignorance about who did the troublesome deed and his real opposition to whatever might damage his PR.

Gangland’s guise must be spruced up. Anything else nullifies the affectation’s raison d’être.

The whole idea is to camouflage the nefarious with a veneer of respectability, to pull the wool over genuinely gullible eyes or to facilitate further feigned faith in the fraud for the hardly-gullible. This is Don Abbas’s serial modus operandi. It’s essential that his renewed collaboration with Gaza’s goon bosses strike the right chord and lend the impression that their reenergized syndicate runs legitimate, reputable enterprises. END_OF_DOCUMENT_TOKEN_TO_BE_REPLACED 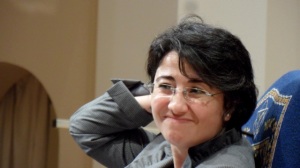 There’s no doubt that Israel is the world’s most liberal and tolerant society even by the yardstick of the truest democracies. It’s hard to envisage a comparable situation where a society in the throes of a cruel war puts up with voices in its own parliament that plainly give succor to the enemy. The question is whether this isn’t tolerance-gone-too-far, especially when cowardly atrocities against children are brazenly condoned and justified.

This is exactly what Balad MK Haneen Zoabi did Tuesday when she asserted on radio that the abductors of three boys on their way home from school aren’t terrorists. Later, after an aggressive showdown in the Knesset with MK Aliza Lavi (Yesh Atid), Zoabi – whose salary we all pay – tried to put things right by explaining on TV that “if I were asked whether to carry out this operation [abduction], I’d have said that it’s not worthwhile and not efficient and therefore I don’t support it. But to accuse them [the abductors] of being the chief culprits – absolutely not.” END_OF_DOCUMENT_TOKEN_TO_BE_REPLACED 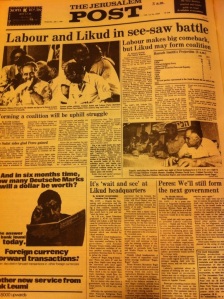 The July 1, 1981 Jerusalem Post 3 a.m. edition – it still told readers that it was still as “see-saw,” that it’s still fluctuating, that it can still swing either way.

Now that we’ve all had a chance to take a deep breath and ignore the presidency, it’s time for retrospective reflection – for ditching conventional wisdom and group-think analyses.

No, this campaign wasn’t ugly and no it wasn’t worse than its idealized predecessors. There’s no denying that it wasn’t heartening but not for reasons which our self-acclaimed talking heads decree as the preeminent premise from which all other evaluations must depart.

The latest presidential contest differs by virtue of the very fact that it was more democratic than any previous one. No favorite sons were imposed by powerful political bosses. Anyone felt free to throw his/her hat in the ring, resulting in a wide array of candidates and a free-for-all. This is to our credit and not to our shame.

What was shameful, however, was that too many candidates were rotten candidates. Some were truly tainted by an inglorious past – to put it delicately. No “contracts” were taken out against them. If anything, it’s a badge of sociopolitical maturity that we no longer sweep suspicions about a candidate’s character under the rug. END_OF_DOCUMENT_TOKEN_TO_BE_REPLACED 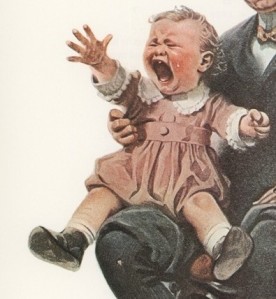 In most individuals, shock and awe antics abate over the years. But not always. (Norman Rockwell illustration, 1921)

When preschoolers don’t get their way, they sometimes attempt to intimidate us into giving in. They throw terrifying temper tantrums, some more frequently and frighteningly than others. The rule of thumb is that the more spoiled a kid is, the worse the whining, crying, screaming, kicking, hitting, rolling on the floor and breath-holding.

According to the preeminent Jewish psychoanalyst Heinz Kohut, the tantrum-thrower’s “core is likely to contain a self-centered, grandiose-exhibitionist part,” and the outbursts represent “narcissistic rages at the blow to the inflated self-image.” Therefore, various refusals, “regardless of their justifications, will automatically provoke fury since they offend the child’s sense of omnipotence.”

In most individuals such shock and awe antics abate over the years. But not always. When immaturity – irrespective of chronological age – coincides with privilege and a sense of entitlement, it’s liable to produce adult petulance and a proclivity for spiteful rants. END_OF_DOCUMENT_TOKEN_TO_BE_REPLACED 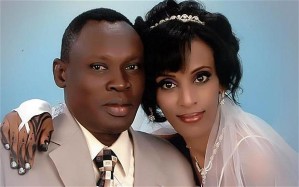 Meriam Ibrahim on the day she wed Daniel Wani

PA chairman Mahmoud Abbas likes to pose as Christianity’s protector. According to his oft-repeated assertions, both Christianity and Islam are endangered by the Jews of Israel and both are united in the need to ward off said threat.

This is the mendacity he brazenly elaborated upon during Pope Francis’s visit to Bethlehem, beneath a huge rendition of the nativity scene which showed baby Jesus swaddled in a Fatah keffiya, bereft of any Jewish connections but connected bogusly to Islam.

The Pope saw fit not to comment on any of Abbas’s insolent distortions. But Abbas’s duplicity is underscored by his deafening silence on the Meriam Ibrahim case. END_OF_DOCUMENT_TOKEN_TO_BE_REPLACED