The heart of any feeling human being must go out to the shaken Brits.  They have duly earned our most compassionate commiseration. Out of the blue they were suddenly confronted, most unpleasantly, with the information that American journalist James Foley had been beheaded by a born and bred Londoner. Ouch!

The widespread sentiment uttered by the usual politically correct chorus of politicos (whose electoral prospects now to no small measure depend on Muslim votes) was one of utter consternation. It’s a no-no not to chime in with the accepted multicultural babble about the delights of diversity and not to aver that British Muslims are loyal members of British society.  It’s jolly de rigueur to claim that they abide by western codes of democracy and decency.

Hence the declamations of dismay at the nasty surprise that the rapper L Jinny could be “Jihadist John” – the executioner who brought Foley’s life to a cruel end.  END_OF_DOCUMENT_TOKEN_TO_BE_REPLACED

Like the unfortunate Phil, we too seem to be stuck in a repetitive pattern of reenacting the same sickening scenario.

Back in 2006 when then-PM Ehud Olmert sent units into battle without sufficient ammo or provisions and all around managed to mismanage the Second Lebanon War, he at one point gloated that victory up north would expedite what he dubbed “Realignment” on Israel’s winding long eastern flank.

That was to be his sequel to the unilateral Disengagement from Gaza a year earlier.

At the time, Olmert’s indiscreet blabbing set off a ground swell of protest among troops who didn’t take kindly to the notion that they would sacrifice life and limb to advance Olmert’s consensus-breaching political agenda. In the view of too many soldiers in harm’s way, the idea of shedding their blood to extend the by-then-obvious Gazan disaster to Israel’s most densely packed population centers wasn’t an appealing prospect.

But some subplots never die. A variation on the theme is being revived right now. All too many in the political arena – both nominal coalition members and opposition leaders – presume to exploit a consensual conflict to advance their non-consensual agenda. They portray Operation Protective Edge as the vehicle to propel their pet project of reinstating Ramallah figurehead Mahmoud Abbas (a.k.a. Abu-Mazen) at Gaza’s helm.

Winning Gaza back for Abbas wasn’t what most fighters fought for. END_OF_DOCUMENT_TOKEN_TO_BE_REPLACED 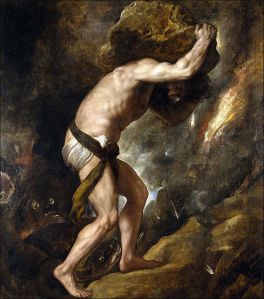 The most effective weapon which Hamas wielded against Israel throughout Protective Edge was its manipulation of civilian casualty numbers and images. The cumulative impact was used to provoke hate campaigns against Israel and/or Jews worldwide and misrepresent Israel’s self-defense as a calculated massacre of helpless civilians.

Some of the ploys were cynical beyond belief.

Photos of dead bodies from the Syrian conflict were recycled as Gazan victims of Israeli malevolence. Even pictures of the Fogel family children, slaughtered inside their Itamar home in 2011 by Palestinian terrorists, were purported to show Arabs murdered by Israeli troops.

Footage from the emergency room at Shifa Hospital in Gaza was rerun continually as if chronicling brand new incidents. Patients brought in due to disease, accidents and domestic violence were all exhibited as casualties of deliberate Israeli barbarity.

But none of this rivaled the numbers game.

END_OF_DOCUMENT_TOKEN_TO_BE_REPLACED

UNRWA, the UN Relief and Works Agency for Palestinian Refugees, has joined Hamas’s clamor for lifting the blockade on Gaza forthwith. This was the gist of what UNRWA’s Gaza spokesman Chris Gunness demanded. No surprise here. UNRWA never played a remotely constructive or impartial role in the Mideast.

Its self-preservation interests perhaps rule out neutrality and fairness to begin with, lest these actually lead to improvements that might obviate the sham pretext for keeping UNRWA around. UNRWA’s continued existence hinges on not solving this region’s problems. 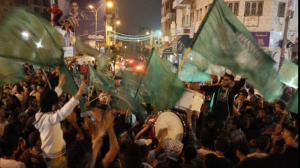 The crowds pranced and danced, jumping ecstatically up and down in what looked like a frenzied tribal trance

Last Friday morning, during yet another so-called humanitarian ceasefire, we heard that Lt. Hadar Goldin was missing-in-action. Before this too was revealed as a ghoulish body-snatching attempt, it looked like the Palestinians had finally grabbed the mega-ransom-generating and game-changing live hostage they craved.

Mind-bogglingly, the truth is that by the Hamas devil’s arithmetic, it was worth sacrificing over 1500 Gazan casualties to just maybe seize one Israeli.

In crude propaganda terms, it was a vicious variation on the theme of the Oron Shaul episode. When Israel suspects an abduction (as in the Goldin case), Hamas torments us with silence. When we discount its claims (as in the Shaul case), Hamas crows about its macabre “successes.”

Anyone who switched to Al-Jazeera early on in the ground phase of Operation Protective Edge heard piercing shrieks of what sounded like “Shaul Aron.” Then followed a screenshot of the Facebook page of a handsome blue-eyed fellow. His name was plainly spelled out: Oron Shaul. His Bar Mitzvah photos too went on Al-Jazeera’s spine-chilling display. END_OF_DOCUMENT_TOKEN_TO_BE_REPLACED 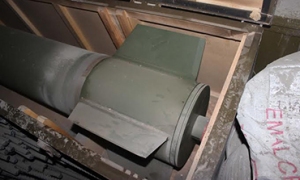 Rockets on board the Klos-C freighter, intercepted by Israel’s navy on its way from Iran to Gaza last March

While it wails piteously, Hamas also crows victoriously. This evident logical incongruity may bewilder us but Gaza honcho Ismail Haniyeh connects the dots thus: “The military victory by the resistance and the legendary strength of our people will lead us to a lifting of the blockade on the Gaza Strip.”

Gaza, he avers, “has turned itself into a graveyard for Israel” and had sown death and destruction in Tel Aviv. On the flipside, precisely Gaza’s own devastation “will make it impossible for the world to ignore the Strip.”

“Gaza’s sacrifices” mandate acquiescence to its demands, foremost the elimination of what Haniyeh calls “the siege” on Gaza. END_OF_DOCUMENT_TOKEN_TO_BE_REPLACED

This was all too evident in the reactions of disappointment that followed the purely tactical decision to re-station IDF units at staging areas in and around the Gaza Strip, while keeping others behind to maintain defensive positions that safeguard Israel’s hinterland.

Anyone who bothered paying attention would have understood that this is no wholesale retreat, that all options remain open after Hamas was dealt grievous blows both to its rocket arsenals and tunnel projects. END_OF_DOCUMENT_TOKEN_TO_BE_REPLACED