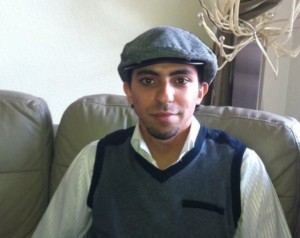 The Charlie Hebdo massacre (as distinct from the subsequent slaughter at the Jewish supermarket) turned the spotlight on Muslim proclivities for righteous rage. Instantly the West’s elected headliners fell over themselves to declare that Islam is a peace-loving religion whose meek adherents only aspire to win a modicum of respect.

As part of our urgent re-education and re-immersion in the cult of multiculturalism, the mantra that the bloodshed “has nothing to do with Islam” was drilled into us nonstop. This, it was repeatedly chanted, is the correct way for us to think. Deviations from the prescribed diktat would be sternly denounced in the name of freedom.

Perhaps that’s why the dismal fate of Saudi citizen Raif Badawi didn’t much move the agenda-setters who so warily safeguard our inalienable right not to veer from their infallible guidelines.

Badawi, 31, fell victim to precisely the same Muslim muzzling as did the Charlie Hebdo cartoonists, but he is geographically distant and, therefore perhaps, his pain is less in the enlightened faces of opinion-molders.

But the fact still remains that he suffers appallingly only because he dared take an independent stand. That’s his one and only crime. END_OF_DOCUMENT_TOKEN_TO_BE_REPLACED

The name switches of what until recently marketed itself as the Israel Labor Party offer fascinating insight into how Zionism has steadily lost its allure on the Israeli Left.

What began life as Poalei Zion – the Workers of Zion – in time it morphed into MAPAI, Hebrew acronym for the Party of the Workers of Eretz Yisrael. The next stage was adopting the generic name of Labor – doubtless borrowed from the British context. So far the trend is clear and straightforward.

But now comes the spin – under its latest leading light, Isaac (not Yitzhak) “Buji” Herzog, Labor  (aligned with Tzipi Livni’s disintegrating list) has chosen to call its ticket the Zionist Camp. At first hearing this certainly appears to be the sort of affirmation that would gladden Zionist hearts. Here at last is the cause of Zionism ostensibly espoused proudly and unapologetically.

A true balm for the soul – or is it? END_OF_DOCUMENT_TOKEN_TO_BE_REPLACED 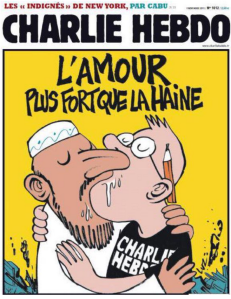 “Love is stronger than hate”: Charlie’ Hebdo’s satirical cover after the magazine was firebombed in 2011

It’s decidedly the untrendy thing to say, but all the same it must be said: the “je suis Charlie” extravaganza is part and parcel of the political correctness that is steadily killing the West.

It’s the ineffectual affectation of those who seek to buck up their spirits while doing nothing real to actually improve their survival prospects. The sad fact of the matter is that the pen is not mightier than the sword and it never was.

When civilizations clash, it’s might that buttresses right. Without might, right perishes. In recent history, Nazism was defeated by armies and communism collapsed because facing it were military forces it couldn’t overcome.

Worse yet, the affectation serves to cover-up – often even to justify – cowardice. Self-appointed pen-warriors and their chic cheerleaders may posture and pretend, but the outright majority of them are the last on whom democracy can rely. END_OF_DOCUMENT_TOKEN_TO_BE_REPLACED