We Israelis owe a debt of gratitude to UK Foreign Secretary William Hague. Were it not for his cogent clarifications last Friday, we’d have never known why we aren’t too popular with enlightened British opinion-molders and with the ever morally superior denizens of the EU.

But thanks to Her Majesty’s top diplomat, who has just graced us with a brief visit, we’re no longer benighted. He has opened our eyes and made us see the light from London.

Israel, he told us via Sky News, has lost support in Britain and elsewhere in Europe due to settlement activities of which the UK “disapproves” and which it “condemns.”

No other problems cloud London’s sky. It’s just all about settlements. END_OF_DOCUMENT_TOKEN_TO_BE_REPLACED

Hassan Nasrallah’s stirring and impassioned defense of Damascus despot Bashar Assad went far beyond the Hezbollah chief’s by-now expected bravado. This was something intrinsically different. Nasrallah is a proven master at toying with the emotions of both supporters and foes in Lebanon. This time, though, and perhaps for the first time, he displayed genuine emotion.

It may have been Nasrallah’s usual braggadocio when he vowed to stay in the Syrian conflict “to the end of the road” and to bring victory to his beleaguered ally Damascus despot Bashar Assad. But the significant portions of his harangue were those in which he listed the consequences to Lebanon if Assad should fall. END_OF_DOCUMENT_TOKEN_TO_BE_REPLACED

Israel is the best country on earth for kibitzers (suppliers of unsolicited advice), for gloating critics who carp from the sidelines, for second-guessers and omniscient Monday-morning quarterbacks, whose hindsight is forever flawless.

This might be just a local curio or cute cultural quaintness, were it not translated into legal monkey wrenches thrown persistently into the machinery of all too many operations of state.

It perforce makes running Israel, even on a mundane daily basis, exceedingly difficult. Without mincing words, Israel is the worst country on earth for policymakers and policy-implementers at all levels of our hierarchy.

We all know of the ordinary soldiers, whose lives are on the line, but who are dogged (contrary to our much-maligned image overseas) by legal strictures to the point that it’s often said that our military personnel – at all ranks – would be well advised not to venture forth without the accompaniment of a lawyer. END_OF_DOCUMENT_TOKEN_TO_BE_REPLACED 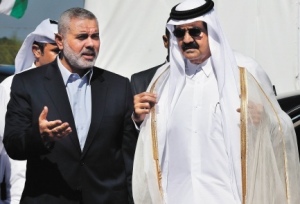 When it serves their purposes, Qatar’s staggeringly wealthy two most powerful players strut about in very traditional Arab garb. But when the occasion deems it expedient, they soothe subliminal western anxieties by donning tailored suits of the exceptionally elegant sort that proliferates in European Union forums. That purportedly imparts an impression of trustworthiness.

The cousins’ policy line is just as chameleon-like. There’s a yawning gap between their utterances in English and in Arabic.

Not too many years ago, Qatar was an Israeli success story, or so it was widely believed in Jerusalem. Relations with Doha, especially trade ties, flourished since the mid-Nineties. They weren’t formal or full, yet they were hardly covert. Everyone knew about them. Unnamed Qatari higher-ups had reportedly visited Israel and Shimon Peres, then deputy premier, openly visited Qatar in 2007. Tzipi Livni did the same a year later. Other Israelis, such as Ehud Barak, hobnobbed with the emir.

But Qatar unilaterally abrogated these ties after Operation Cast Lead. Doha offered to restore them if Israel allowed unrestricted shipments of building materials to Gaza. Since these can be used to build bunkers, Israel refused. END_OF_DOCUMENT_TOKEN_TO_BE_REPLACED 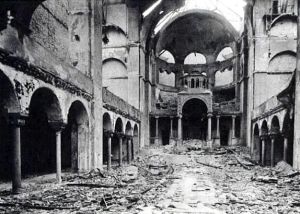 Years ago, when I was a young cub reporter at the Jerusalem Post, one of my esteemed veteran colleagues complained to the police about a motorcycle gang that used his apartment house parking lot for noisy nightly daredevil stunts.

The constabulary wasn’t much bothered but my colleague warned the teenage bikers that the cops know about their exploits. That put no damper on the hijinks. Quite the contrary, they increased in frequency, duration and decibels. When my colleague righteously admonished the loud louts, they threatened to kill him.

More indignant than ever, he again marched to the nearby police station and reported that the outrage has escalated and that his life is now in danger. The duty sergeant, who heard him out, asked matter-of-factly: “have they killed you yet?”

Since it was obvious that the plaintiff before him is alive and in a huff, the intrepid law-enforcer added condescendingly, by way of offering sage and soothing advice: “come back to us only after the boys actually kill you.” END_OF_DOCUMENT_TOKEN_TO_BE_REPLACED

US Secretary of State John Kerry may lack that mischievous twinkle ever-present in Vice President Joe Biden’s eyes, but, despite his seemingly earnest demeanor, Kerry is no less likely than Biden to put his foot in his mouth.

Take, for example, the analogy that Kerry drew between the Boston bombing victims and the thugs who were killed in a violent battle aboard the Mavi Marmara as a result of Turkey’s 2010 provocative attempt to breach Israel’s maritime blockade on Gaza.

Even the ultra-unfriendly UN had pronounced that blockade eminently legitimate.

True, Israel quasi-apologized but that was due to American pressure and not the rights and wrongs of the case. Realpolitik considerations eclipsed the truth and had overridden our national honor. Nonetheless, that still doesn’t render the heavily armed and pugnacious Turks as innocent as the eight-year-old child and the two young women murdered near the marathon finish line. They merely cheered on the runners. They didn’t provoke, nab, bludgeon, stab or seek to kill anyone. END_OF_DOCUMENT_TOKEN_TO_BE_REPLACED