Conventional wisdom contends that neither Gaza nor Cairo harbors much interest in fanning terrorist flames and disrupting the uneasy truce that has precariously prevailed since Operation Cast Lead. Egypt, an unsteady step away from uncontainable internal chaos, prodigiously presents Cairo’s caretaker military junta with other preoccupations.

Simultaneously Hamas surely doesn’t relish another punishment of the magnitude inflicted upon it in 2008.

This makes ample sense – on our wavelength. Cerebral processes in the Arab realm, however, don’t necessarily conform to our rationale. They practically never do.

Israelis shocked by last week’s roadside massacre outside Eilat and by the ensuing rocket barrages from Hamastan fall prey to excessively non-Levantine logical assumptions. They fail to understand that our concepts of levelheadedness don’t apply in neighboring latifundia. END_OF_DOCUMENT_TOKEN_TO_BE_REPLACED

We can all feel like heroes by just coming out to hear mediocre renditions by opportunistic crooners who infuse us in high decibels with affectations of purpose and camaraderie.

Altruism isn’t part of the equation. Entitlement antics mandate no self-sacrifice. Quite the contrary.

It’s not “what I can do for my country” but “what my country can do for me.” While the world precariously teeters on a recessionary precipice, we indulge in anti-capitalist conniptions, incongruously powered by the profit motive.

The summer heat and humidity have finally steamed the leftovers of our collective gray matter and sent this nation into a hissy fit. Our irrationality is fueled by devil-may-care irritability. We’re seemingly ready to throw out the baby with the bathwater, to the delight of Mahmoud Ahmedinejad, Hamas, Mahmoud Abbas, et al. Boiled brains, mass neuroses, greed and trendy tantrums make us perfect patsies for political exploitation. END_OF_DOCUMENT_TOKEN_TO_BE_REPLACED

When a protest over high rents evolves into an all-encompassing clamor for “social justice,” odds are that it calculatingly conceals something so extensive, so ill-defined and hence so unattainable that non-satisfaction is a priori guaranteed. Nothing can possibly please these protest-orchestrators. All goodwill gestures will predictably fall short of their catch-all demands. END_OF_DOCUMENT_TOKEN_TO_BE_REPLACED 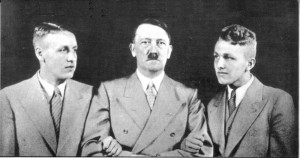 Negligible reports tucked away below the fold of forgotten inside pages oftentimes signify much more than the scant attention accorded them. So it was with news that the Israel Chamber Orchestra played Wagner in Germany at the Bayreuth Festival dedicated to his veneration. This perhaps constituted the greatest break yet of Israel’s unofficial, socially accepted taboo on public performances of Richard Wagner’s music (as distinct from listening in private).

Nonetheless, easygoing apathy greeted a story that yesteryear would have instigated riots. Classical music is anyhow the preserve of shrinking clusters of cultural aesthetes, once numerous and influential in our midst. Today, they’re judged esoteric and hardly anyone cares.

Moreover, several false premises paint Wagner-aversion as ludicrous and outdated. Wagner’s music, we’re told, shouldn’t suffer because Hitler appropriated it. The composer, after all, died half a century before the Third Reich.

Another premise is that our loathing for Wagner is insular and generation-based. Hear ICO chairwoman Erela Talmi: “The atmosphere has changed, and those people who were at the concentration camps are either weaker or no longer with us, and those who voiced their [anti-Wagner] opinions are only a few and it’s hard for them to be heard now.”