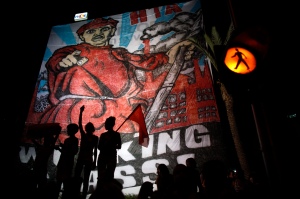 When a protest over high rents evolves into an all-encompassing clamor for “social justice,” odds are that it calculatingly conceals something so extensive, so ill-defined and hence so unattainable that non-satisfaction is a priori guaranteed. Nothing can possibly please these protest-orchestrators. All goodwill gestures will predictably fall short of their catch-all demands.

So when you see supposed hard-luck protesters, who pitiably cannot pay the rent, gesticulate mockingly as the prime minister makes them an offer – dismissing it before he finishes speaking, before hearing him out, before anyone has studied his numbers, read the spreadsheets, or done elementary arithmetic – you should understand that there’s no desire to gain anything specific, but to provoke and intensify discord.

The very insistence (subsequently dropped) on televised negotiations to better the nebulous lot of everybody (increased tax burdens for everybody notwithstanding) tells us the instigators’ aim isn’t to redress specific grievances, but to rake in propaganda capital. They aspire to look good rather than juggle figures (which is, alas, boring and not photogenic, but without which nothing can be accomplished).

Mega-doses of skepticism are mandated when equal-opportunity humanitarians fulminate against anathema settlers or observant Jews. Rightist tongue-in-cheek solidarity and facetious pseudo-support don’t diminish left-wing demagoguery, nor do occasional disingenuous make-nice overtures by the protesters toward their political bugbears, especially beyond the Green Line.

When the supposed champions of everyman march down city streets with red flags, this should instantly switch on every red light in our craniums – even if our consistently tendentious, left-dominated media choose not to notice.

Anyone who still doubts that the red flags are key, must pay attention to the pre-prepared placards, well-rehearsed anti-government mantras and those mass-produced Bibi masks donned by demonstrators shouting anti-Bibi slurs. There’s no mistaking the dishonorable hallmarks of anarchist agitation at the behest of far-out left-wing goals.

For those unsure of how this works, here’s a short glossary of helpful terminology:
• Front organization – used as a shill by others, by significant behind-the-scenes paymasters who prefer to obscure the front’s provenance to facilitate its exploitation as a tool for recruitment. This tactic, a communist favorite, spawned fronts like the World Federation of Democratic Youth, the International Union of Students, the World Federation of Trade Unions, the Women’s International Democratic Federation and the World Peace Council, to name but a few.

Fronts typically proliferated where Marxist Parties struggled to grab clout. They rendered radical dogma more palatable to non-Marxists and helped mobilize them to carry out tasks for purposes they couldn’t readily evaluate.

• The affinity group is an activist assemblage that appears non-hierarchical and decentralized, based on common philosophies and concerns – like animal rights, the environment, anti-war and anti-globalization. These coteries constitute ideal targets for manipulation by fronts.

• The mass movement – a front organization variant, promoted as the vox populi to denote broad public backing. Historically this oftentimes involved organizations that were not originally communist-controlled but that later became so. Most members are blissfully unaware of ties that bind them to other associations and never suspect anything subversive or nefarious. The object is to lend the impression of an authentic grassroots upsurge.
• Astroturf – Borrowing its name from a synthetic-grass brand, this is a political technique to simulate grassroots gusto and imply a spontaneous groundswell of opinion as distinct from politics overseen by traditional power structures. In reality, however, the agenda and strategy are directed by hidden financiers and stage-managers. Individuals seemingly voicing heartfelt indignation are indispensable to the spectacle – sometimes also known as “rent-a-crowd.”

• The useful idiot – an old communist term of disputable origin but still eminently relevant. Useful idiots play vital roles in the above-listed fronts. In USSR parlance, the useful idiot was a credulous, well-meaning dupe who, while not a communist, was converted to creeds that conveniently enabled communists. Inevitably, too much misguided naïveté and a desire to be a force for good led gullible, sincere saps to unwittingly support malignant causes.

There are several idiot sub-categories:
• The fellow traveler – a person who identifies with the clichés of an organization or assists its activities without maintaining formal membership in it. Originally Bolsheviks applied the moniker to writers and artists sympathetic to the Revolution’s goals but not card-carrying communists. Fellow travelers flaunted unmistakable inclinations, partook in communist- sponsored events, contributed to communist crusades, published pro-communist commentaries or wrote for communist journals and fought alongside the communists.

• Salon communist – a.k.a., the chattering classes, coffee shop revolutionaries and latte liberals. These diverse classifications focus on leftists who enjoy a degree of affluence, benefitted from educational opportunities and cultivated fondness for the finer things in life. Americans know them as limousine liberals, the British as champagne socialists, and Australians as chardonnay socialists, while the Italians talk of radical chic and the French of caviar gauche. The Petit Larousse dictionary defines “left caviar” as “progressivism combined with a taste for society life and its accoutrements.”

• Anarchist – In truth, this loose category defies precise definition because of its bewildering array of types and beliefs. Suffice it to say that many anarchists evince very pronounced left-wing orientations, squawk about social justice and, despite claims to the contrary, hardly oppose aggression – even terror – and propaganda.

The entire aforementioned catalogue of political disguises unequivocally features in the current Tel Aviv “social insurrection” hullabaloo. When a protest about rents deteriorates into a demonstration to bring down the government, loud warning bells need be sounded and in a hurry.

The government’s identity should be immaterial to genuine protesters. Obviously Binyamin Netanyahu didn’t singlehandedly create all of Israel’s socioeconomic woes. Demands can be addressed to him, but ad hominem invective tips us off to another underlying and not-so-innocent agenda.

It shouldn’t take uncommon acuity to discern sly (though expectedly denied) ploys by astroturfing front organizations and assorted useful idiots to overturn the results of a democratic election by nondemocratic means – even if packaged as grassroots discontent.

A crafty covert campaign to countermand the voters’ wishes should outrage anyone who still sincerely cherishes values represented by the ballot box. Trendy cynicism mustn’t override the basics, which include respect for the people’s verdict.

This is the first of two parts.

15 thoughts on “Another Tack: Red flags in Tel Aviv (I) – a helpful glossary”