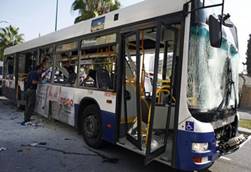 There was no reason for the shocked reactions in Israel following the disclosure that the suspected perpetrator of the bus bombing in Tel Aviv last week was a Palestinian Arab who had been granted Israeli citizenship to facilitate a “family reunion.”

This category of Arab Israelis had been implicated before in terror, espionage, assorted conspiracies to undermine Israeli security and a surfeit of random crime.

Hence, any sense of surprise is misplaced. If anything, this should serve as a reminder. Too many have, for example, forgotten Shadi Tubassi, the suicide bomber who murdered 16 Israelis at a Haifa restaurant a decade ago. He too was allowed here for “family reunion.” END_OF_DOCUMENT_TOKEN_TO_BE_REPLACED