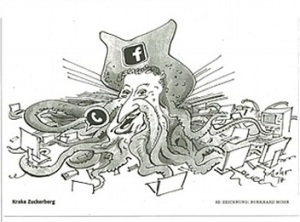 Most German publications no longer even pretend any wariness about coming off as anti-Jewish. Gone are the days when Germans had to at least appear a tad more cautious than their fellow Europeans. The latter reverted quickly enough to their old Jew-baiting habits but the Germans have willy-nilly caught up.

A cogent example is being consistently provided by Munich’ s left-liberalSueddeutsche Zeitung, which also happens to be Germany’s largest broadsheet daily. It recently featured a cartoon lampooning Facebook founder and CEO Mark Zuckerberg after his outfit had acquired WhatsApp. The idea was to show Zuckerberg as a voracious octopus that swallows up everything around it. The caption at the bottom left-hand corner of the cartoon clearly read “Krake Zuckerberg” (German for Octopus Zuckerberg.) Up to this point, it’s tolerable criticism.

But the octopus, as drawn by cartoonist Burkhard Mohr, was also given quite a distinctive face. Its function, presumably, was to make sure we don’t lose sight of the fact that young Zuckerberg – innovative enough to have given the world a social network which millions of Germans also use – is a Jew. To that end, Mohr portrayed him with a preposterous hook-nose and thick fish-lips – as per the freakish stereotype sinisterly ascribed to Jews by their tormentors. END_OF_DOCUMENT_TOKEN_TO_BE_REPLACED