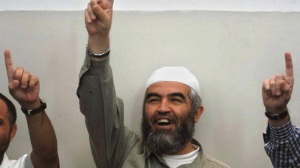 It’s not often that when a defendant is sentenced to do time behind bars he exclaims jubilantly. But that’s precisely what happened last week when Islamic Movement Northern Branch leader Sheikh Raed Salah – an Israeli-Arab, former mayor of Umm el-Fahm and a convicted Hamas collaborator – was handed down an eight-month term for inciting to violence in 2007.

Salah had then orchestrated riots against archeological rescue-digs and a new pedestrian bridge near the Temple Mount. He accused Jews of “eating bread dipped in children’s blood.” He praised and eulogized terrorist murderers. He threatened anyone who claims any Jewish connection to the Western Wall, “even to just one stone.” Thereafter, Salah has been regularly holding “Save al-Aksa” rallies dedicated to the incendiary calumny that Israel is out to demolish the Muslim compound atop Temple Mount.

His ultra-light sentence inspired him to shout insolently in open court: “Blessed is God – I got off cheap!”

He certainly did and therefore his rejoicing. It wasn’t a sarcastic pose.  Salah had cause for celebration. Considering his history, he rightly expected far worse.

Not only was Israeli justice incomprehensibly slow, but yet again, it plainly allowed Salah to escape serious penalty despite a long and brazenly escalating record of outright sedition. He had once more defeated the system and exposed Israel’s lack of deterrence – indeed its utter reluctance to confront him. Hence he can carry on his overt subversion and rabble-rousing with impunity.

Back in 2003 Salah was convicted and briefly jailed on charges of raising millions for Hamas. That year he also published the following poem in the Islamic Movement’s periodical: “You Jews are criminal bombers of mosques/ Slaughterers of pregnant women and babies/ Robbers and germs in all times/ The Creator sentenced you to be loser monkeys/ Victory belongs to Muslims, from the Nile to the Euphrates.”

In 2009 Salah urged cheering Arab students at Haifa University, which allowed him to speechify on campus, to die as shahids (martyrs) in the war against Israel. He charged that Netanyahu “aims to implement plots hatched during his previous term and complete the takeover” of Temple Mount.

In 2010 Salah was one of the leading participants in the Gaza flotilla, sailing on the Mavi Marmara.

On 2011 British home secretary Theresa May banned Salah’s entry due to recurrent hate-promotion via sermons, lectures and in his so-called poetic output. His presence in Britain is “not conducive to the public good,” it was decreed. Salah was subsequently detained in London, after it emerged that he had entered the UK in defiance of the exclusion order.

He, nonetheless, won on appeal because the Upper Immigration Tribunal concluded that Salah is evidently not considered a menace in Israel, whose citizen he is and where he is free to essentially do as he pleases.

This episode is vitally important. What we do here clearly has repercussions abroad. If we brush hate-mongering under the carpet, we can’t expect foreigners to behave more bravely than we do. The bottom line is that while Britain’s Home Secretary thought Salah was dangerous, Israel prefers permissive lassitude parading as enlightened tolerance. That ought to serve up lots of food for thought among Israelis.

The latest sentence imposed on Salah is a joke and he straightforwardly told us so in our faces.

Salah has again managed make mockery of our legal system and law enforcement. Unfortunately, this isn’t just between him and the judiciary. It impacts us all.

Much of this was facilitated by the fact that for years Israel has tolerated Salah’s inflammatory speech and prodigious provocations, almost on the premise that if these were pooh-poohed, they’d just go away. Instead, however, Salah only gained stature and rose to prominence and popularity the likes of which should justifiably alarm us, considering his nonstop incitement.

The longer Israel allows Salah to spread sedition with impunity, the greater his spiritual-mentor authority will grow and the more young Israeli-Arabs will be swayed by his exhortations to join the procession ofshahids to paradise. Making light of Salah’s subversion won’t make it disappear. It doesn’t work that way.