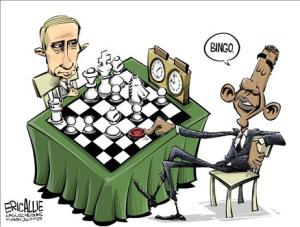 Ultra-popular in cyberspace these days is a cartoon showing Vladimir Putin as a shrewd strategist executing moves on a chessboard, while a laid-back Barack Obama incongruously plays a single checkers piece and yells “Bingo!”

We may agree or disagree with this depiction but such is the widespread perception of the Ukrainian crisis and the invasion of Crimea. The Russian leader is regarded as having handily outmaneuvered the American president and with him the entire West.

For Israelis, though, this is no laughing matter. We aren’t mere spectators on the sidelines. This sad spectacle couldn’t be more relevant to Israel. The implications to our own predicaments are compelling and quite inescapable.

From our vantage point there are no saints in this scenario. Our sympathies aren’t clear-cut. Ukrainians are recalled in Jewish history as the second-greatest-ever mass-murderers of Jews – directly after the Germans (with whom many Ukrainians avidly collaborated during the darkest days of the Holocaust).

And yet there’s a key element in the current Ukrainian travails that is particularly pertinent to the complexities and pressures which Israel faces.

When the USSR broke up, some of its former republics, like the Ukraine, ended up with massive nuclear stockpiles. The West, justifiably anxious, sought to convince the newly independent Ukraine to disarm. These efforts reached fruition in 1994 and the Ukraine’s reward was that America and Britain guaranteed its security and territorial integrity. In other words, they undertook to come to the Ukraine’s aid, should anyone threaten it. That anyone could be no other than Russia.

This was no trivial guarantee. Any novice should have understood what the Kremlin’s residual vital interests were. They foremost meant keeping both the Ukraine and Belarus under Russia’s aegis and away from any alliance with the West and especially NATO. The same went for Russian interests in the Caucuses, which resulted in Moscow’s aggression against Georgia.

Thus pledges made to the Ukraine should have been accorded exceptional gravity in Washington rather than be treated as inconsequential lip-service. The Ukraine’s violent internal upheavals – with their communal/linguistic/ethnic undercurrents – shouldn’t have been cheered as another hip street-happening, much as the misnamed Arab Spring previously was.

It should have been clear from the outset that Kiev’s unrest could in the very least produce troublesome ramifications vis-à-vis Crimea, which is hardly part and parcel of the Ukraine. It was awarded to the Ukraine in 1954 by the then-Communist chief Nikita Khrushchev, himself a Ukrainian. As long as the Ukraine was an integral component of the USSR this scarcely mattered. Afterwards it mattered hugely.

The amateurish and slipshod comprehension of crucial complexities in the Russian sphere reflects the Americans’ and Europeans’ systemic misreading of exasperating situations elsewhere – from Israel’s existential woes to Iran and North Korea. Disconcerting enough in and of itself, ineffectual crisis-management is bound to lead to fiascoes.

But it gets worse because the chronic inability to gauge geopolitical realities also emboldens both the Americans and Europeans to dispense promises which they later do not keep. This cannot but result in a corrosive effect on America’s deterrent, especially when the US military is being shriveled to its pre-WWII size.

However, the immediate victims are those who trusted American assurances – like, in this case, the Ukrainians.

Of course, they are not the only ones left with guarantees not worth the paper they were printed on. Many of America’s loyal allies were abandoned in the “Arab Spring.” Obama backtracked from the red lines he himself drew for Damascus despot Bashar Assad, leaving Putin and the Tehran axis with yet another victory. Red lines regarding Iranian nuclear ambitions were just as blithely ditched.

Israel is now being coerced to divest itself of all its strategic assets in Judea and Samaria and expose its soft underbelly – its frightfully narrow and heavily populated central region – to terrorist predations.

Israel’s sole safeguards are to be guarantees disturbingly similar to those supplied the Ukrainians. What now unfolds in the Crimea should serve as a thunderous warning against placing ourselves at the mercy of apparent allies. Here, but for the grace of God, go we.