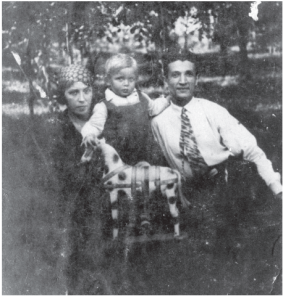 The only relatively clear remaining photograph of Abramek, showing him as a toddler with his parents.

In a motorized bird I’ll sit,

And to the reaches of space I’ll rise.

I will fly, I will float to the beautiful faraway world

And skywards I will soar.

The cloud my sister will be

The wind is brother to me.

I will fly, I will float over rivers and seas.

I will marvel at the Euphrates and Nile.

I will gaze at the Sphinx and Pyramids

In the goddess Isis’ ancient land.

I will glide over the mighty Niagara Falls,

And soak up the warmth of the Sahara’s sun.

Above the mysterious magic land of the Hindus.

And when extricated from the sun’s heat,

I will take wing to the Arctic north,

And I will whir above the giant Kangaroo Isle,

And then over the ruins of Pompeii.

From there I’ll set my sights to the Holy Land,

Where our Covenant was given.

I will even reach illustrious Homer’s country,

And will be so amazed by the beauty of this world.

To the heavens I will take off.

The cloud my sister will be;

The wind is brother to me.