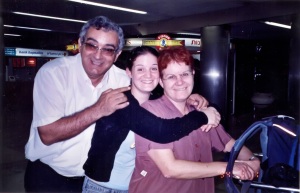 On the first anniversary of the October 26, 2005, suicide-bombing in Hadera’s open-air marketplace, the city organized a memorial for the six victims (the seventh lingered and died of her injuries four years after the blast). The families expected a solemn, respectful occasion. It was anything but.

Michal Machlouf, who lost her mother Pirhiya in that atrocity, came away feeling alienated: “Municipal politicians heartily slapped each other on the back for having successfully reconstructed the market. Our tragedy became their vehicle for unabashed campaigning and expedient self-congratulation. Mom’s name was misspelled on the commemorative monument, and we felt surplus to requirements. It was obvious that the organizers couldn’t wait for the bereaved relatives to go away, because we were killjoys. We focused on the blood, while they had very nimbly moved on.”

The same sense of alienation resurfaced during the exhilaration sparked by Gilad Schalit’s release: “I’m pleased he’s back, but this outburst of euphoric festivity is so out of place, so unseemly and so unfeeling. Again we, families of terror victims, were made to feel like killjoys, like burdens who remind the celebrants of horrors-that-were and of horrors-to-come. Despite obligatory lip service, nobody wanted to remember the past or think about the future.” END_OF_DOCUMENT_TOKEN_TO_BE_REPLACED