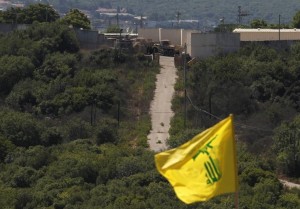 An Israeli military outpost as seen from South Lebanon, where a Hezbollah flag flutters

Perceived dangers to our lives and ways of life can be a function of trends – just like everything else in our existence. The latest headline-grabbing focus of fear is Islamic State expansionism. This isn’t a bugbear of negligible proportions.  IS bloodlust and fanatic belligerence are nothing to scoff at.

That said, however, IS isn’t the only threat to the world’s democracies – Israel among them. Neither is it the greatest threat – certainly not to Israel.

Regardless of the repugnance aroused by IS’s sensationalist and lurid beheadings, worse villains abound in our region. Iran with its nuclear ambitions is foremost one, even though the White House is poised to appease Tehran’s ayatollahs without disarming them.

Syria’s Assad regime, until recently the side the world most loved to hate in the internecine civil strife, hasn’t lost any of its inherent nastiness just because IS has emerged as uniquely barbaric. And propping up Assad is the Shiite Hezbollah of Lebanon, whose menace to Israel has only grown by leaps and bounds despite its absence from the front pages.

This, in a nutshell, was the recent message of a “senior IDF commander” in the North who stressed that “no anti-Israel action on the Golan has thus far been perpetrated by the rebel forces in Syria but only by the organizations that support the regime in Damascus.”

The subtext is quite clear. Transfixing as their macabre excesses may be, the jihadists have not to date attacked Israel. Here it needs be noted that the border area straddling the Golan’s Syrian side is mostly controlled by the Jabhat al-Nusra subsidiary of al-Qaida, as distinct from the indisputably more notorious IS.

Nevertheless, those volleys fired into Israel in past months – not all of them by any means stray shells – almost always came from pro-Assad encampments, i.e. from Hezbollah forces. These forces continue to mercilessly batter the Syrian population, which is concomitantly also pounded by the Jihadists.

Israel thanklessly sends humanitarian provisions to the refugees (including food, fuel and clothing) and offers medical aid to all Syrian casualties regardless of their affiliation.

Although, in the immediate offing there is little risk of a Hezbollah offensive against Israel – as it’s deeply embroiled in the Syrian conflict – Hezbollah remains a formidable foe as far as Israel is concerned. More than anything, Hezbollah operates as an Iranian proxy and its Lebanese and Syrian enclaves are for all intents and purposes Iranian outposts in Israel’s closest proximity.

Hezbollah, moreover, is just as prone as the Sunni Hamas in Gaza to use civilians as human shields to deter Israel from using its full deterrent capabilities in the event of conflict. In the past Hezbollah has physically prevented southern Lebanese noncombatants from fleeing up north in order that their presence would paralyze Israel’s military response.

But it gets worse: the Hezbollah weapons arsenals are incomparably larger than Gaza’s and comprise far more powerful assortments – all supplied by Iran under the noses of UN supervisors. That, along with the battlefield experience garnered in Syria, makes Hezbollah “many times more dangerous” than Hamas ever was or could be, according to Maj.-Gen. Ya’ir Golan, the IDF’s outgoing OC Northern Command.

He further warned that Hezbollah stockpiles include heavy missiles and that because of the quality and quantity of what Hezbollah has been allowed to harbor, it would be wrong to expect the same degree of defensive cover as Israelis could count on last summer in both the southern and central regions.

The bottom line is that while world opinion is mesmerized by the ghoulish hijinks of Islamic fanatics, it loses sight of Iran’s threat, which in every respect surpasses the IS potential for evil.

The sporadic bombings in Syria and Iraq, as well as America’s capitulation to Iran at the negotiations table, all point to the fact that the international community – perhaps a bit too expediently – has allowed itself to carelessly overlook fundamental perspectives. This is a luxury Israel cannot afford.