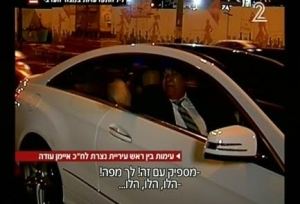 The kneejerk response in Israel’s Arab sector is to declare general strikes to underscore what is hyped as “popular anger.”

The latest expression of such “anger” took place last week when throughout Israel’s Arab communities businesses shut down for a day. Doubtless many were forced to do so but the truth is that many others were willingly swept up in the well-orchestrated volatility.

Surely they realized that they are only shooting themselves in the foot. Their strikes simply and serially fail to awe the mystified Jewish majority. The only effect strikes have, if any, is to hone even further the already deeply ingrained impression that this country’s Arabs side unequivocally with Israel’s existential and implacable foes.

To resort to extreme understatement, this in no way contributes to the cause of coexistence.

Hot on the heels of a spate attacks against Jewish civilians in nearly every nook of this country, the Arab general strike invariably helped establish an association – whether subliminal or conscious – between Arab businessmen and the recurrent stabbings, shootings, fire-bombings and rock-throwing.

Such connections needn’t be iron-clad and incontestable. The delicate psycho-economic equilibrium can be easily upset by an intensifying sense of a tie between terrorists and the population that appears to support the deadly assaults on innocent Jews.

Inevitably this will keep Jews away – at least for the short haul – from Arab entrepreneurs. Some of the latter are already complaining vociferously against what they allege is a Jewish conspiracy to boycott them. Moreover, a sizable minority altogether charges that none other than the government is spearheading an anti-Arab boycott.

The plain fact, though, is that no boycott was ever declared, much less that one resulted from a plot by Israel’s leadership. This is the stuff of fables and fabrications that submerge Israel’s Arab communities in a mire of false premises, which distance them increasingly from the Jewish mainstream.

The inclination of most Jews is to avoid giving their custom to those who identify with genocidal enemies. These are individual decisions which no authority needs to pump up and which none can reverse. It’s mostly in the hands of the Arab sector to correct or exacerbate.

This is the essence of the point Nazareth Mayor Ali Salem tried to make recently when he drove by and spotted Joint (Arab) List chairman Ayman Odeh giving a TV interview on a Nazareth street corner. Salem shouted furiously at Odeh: “Get out of here, enough with the interviews. You ruined the city for us… There wasn’t a single Jew here today. Not even one!”

Bottom line: the incitement by Arab politicians, the radicalization in its wake, the terrorist frenzy this breeds and ensuing protests in support of the terrorists are bad for business. Thriving businesses aren’t the interest of a select few. They provide the livelihood which sustains many Arab communities, like the largest one in Nazareth.

Quite predictably, Salem was soon thereafter castigated by the very politicians who inflame passions in the Arab communities. He was denigrated as the traitor that he isn’t. Nothing was allowed to interfere with the raking of political capital from the premeditated escalation of a synthetic crisis.

This is but a replay of a staple tactic.

In 1936, at the instigation of Nazi-collaborator Haj Amin al-Husseini, a general strike in the Arab sector lasted for 175 days. In many cases it was enforced by intimidation. In the end, it took international intervention to extricate the Arabs from their own strike. Thousands of Arab merchants, shopkeepers, small manufacturers and farmers were driven into bankruptcy and numerous more lost their jobs.

If this economic war was geared to strangle Jewish subsistence in this country, the opposite occurred. The Jewish economy flourished as never before and a nascent Jewish state emerged from the havoc.

Yet the lesson of that seminal disaster had to be painfully relearned time and again – most recently in the wake of the 2000 riots. Incredibly, Israel’s Arab sector appears on the brink of imposing on itself more homemade wretchedness.

5 thoughts on “Bad for Business”