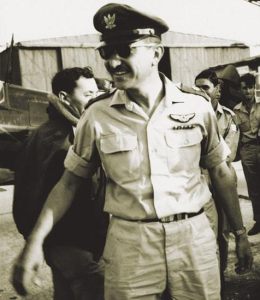 Ezer Weizman- “the Eternity of Israel shall not deceive and the Arabs won’t let us down.”

Back when late president Ezer Weizman was still the witty commander of the Israel Air Force, given to rolling cool quips off his tongue, he elaborated only semi-facetiously on a staple quote from the First Book of Samuel: “the Eternity of Israel shall not deceive” (1 Samuel 15-29). To the promise of unfailing divine providence for Israel, Weizman added: “and the Arabs won’t let us down.”

In other words, we can count on our quick-tempered neighbors to extricate us out of any tight spot via their shortsighted intransigence. Less flippantly, Weizman’s contemporary, ultra-dove Abba Eban, hinted at an obliquely related reality when he judged that to their distinct disadvantage the Arabs “never missed an opportunity to miss an opportunity.”

That said, niggling doubts persisted all along at the back of our minds. There always preyed the bothersome hypothetical of what would happen if the Arabs Ezer wisecracked about would wise-up and quit being too pigheaded for their own good. Now it seems that what we distantly dreaded has finally come to pass.

If things truly went our way, Palestinian Authority figurehead Mahmoud “Abu-Mazen” Abbas would for sure have announced unequivocally from the UN General Assembly podium that he is revoking the Oslo Accords with immediate effect.

Without much ado, he would have torn up the documents on which Oslo’s convoluted clauses, subsections, stipulations and provisos are listed. That would have been dramatic and would have left no uncertainty in anyone’s cerebral recesses that Oslo has at long belated last been ignominiously dispatched to the netherworld.

In fact, Oslo has been a smelly decomposing cadaver for years but no one, least of all diplomatically timid Israel, dared say it like it is.

Across the Green Line, Abbas and his front men hectored ominously in a refrain of irascible rants. If we don’t bow to Ramallah’s diktats, we were warned, Abbas will do the unthinkable and actually bury Oslo’s putrid remains.

Presumably that should have sent us all into a tizzy of trepidation.

In fact, though, Israel would have heaved a sincere sigh of relief had Abbas actually done the decent thing for once and pronounced the demise of the evil poltergeist that imperils our self-preservation prospects.

But it was apparently way too good to be true. Perhaps in a rare moment of clarity amid his petulant outbursts about “filthy Jewish feet contaminating Arab Jerusalem’s sanctity,” Abbas understood that he’d only be doing the “filthy Jews” a favor by taking them off the Oslo hook.

So he stopped short of carrying out what was hyped to intimidate us. Instead, all we got is yet another conditional caution that Abbas intends to be really naughty if we don’t stop him ASAP. That in no way comes even remotely close to bearing out Ezer’s premise that “the Arabs won’t let us down.”

But perhaps we were just daft to hope.

After all, Abbas has been cantankerously barking the identical threats for years. Each time he puts Israel severely on notice that if we don’t clean up our act and commit national suicide forthwith, he will walk away from Oslo and maybe even resign the position to which he was last elected (well, sort of) in January 2005 – for just a four-year term.

Abbas puts on the same horror show at exactly the same season annually – roughly coinciding with the Jewish High Holy Days (when incitement over Jerusalem’s sacred sites is most expedient and most effective) and the General Assembly session (when Abbas expects greatest international exposure).

Only minor details ever change – like those involving immediate sources of discomfiture for Abbas on his Ramallah turf or specific exasperating circumstances in the greater Arab realm. Other that, what was is almost precisely what is.

It just doesn’t necessarily seem so because our memory receptacles in this region are filled to capacity and overflowing. We are constantly inundated with new sensations hot on the heels of only yesterday’s headlines. We become inured and unable to retain more incoming information.

On top of this, tendentious media everywhere are hardly reliable memory custodians. Often, they amplify and exaggerate reruns of bygone cliffhangers and recycle them as new gripping attractions. Headline-pushers and ratings-grabbers don’t want us to connect the dots and deduce that nothing new is on offer.

Good retentive faculties among members of the public are altogether undesirable in the eyes of many practitioners of advocacy journalism. Their preferred agendas might be foiled were news-consumers to demonstrate even fair to middling powers of recall.

The truth is that Abbas’s latest threats were old hat, an almost literal repetition of his oft rehashed histrionics.

If any proof were needed, a verbatim transcript below of an editorial I wrote three years ago should provide it. True, it includes references to economic protests rather than to the Syrian mayhem that currently steals the Palestinian thunder. Other than that, however, the old text appears oven-fresh. It could have been written this morning.

Of late Mahmoud Abbas’s PA appears to be staging recurrent verbal thrills-and-spills extravaganzas. It’s almost as if, when nothing else works, generating headlines constitutes a viable alternative to actual policy and governance.

And so the latest bombshell Abbas attempted to toss was the suggestion that Ramallah might abrogate the Oslo Accords with Israel. It’s difficult to fathom who Abbas supposes he may be frightening. If any side had benefitted from Oslo, it was his. After 19 years, Israel can definitely pronounce itself the outright loser of its own risky experiment.

From our vantage point, not only was there no gain but there was a surfeit of inordinate pain. We had lost over 1,500 lives – once cynically referred to as “victims of peace.” We had nosedived into a diplomatic nadir of unparalleled detriment. We had constructed two inimical entities – Ramallah and Gaza – within a stone’s throw from our vulnerable population centers.

We had imported between 40,000 to 50,000 armed Fatah terrorists from Tunis and given them and their Hamas rivals legitimacy at the expense of our own legitimacy. We had made the creation of a Palestinian state axiomatically accepted everywhere while our own existence is being increasingly questioned.

Worst of all, peace seems more distant now than it did in September 1993, when our situation was incomparably better.

Therefore, at this point in time Oslo should no longer be dear to any sober Israeli, which brings up the question of why Abbas assumes that he would be startling us with the move he now purports to be seriously weighing.

Yet according to PLO Executive Committee member Wassel Abu Yusef – and he is hardly the first to float this thinly-veiled threat – Abbas has been raising the idea of “cancelling the Oslo agreement as well as the associated economic and security arrangements,” in PA leadership consultations.

To delve beneath the surface of Abbas’s bluster it would help to note what accompanies his chatter about nullifying Oslo.

Two themes crop up consistently in this context. The first is that Abbas’s sole substitute for a Palestinian state is a bi-national state which Israel would initially run as an apartheid state – prior presumably to being overrun by Arabs and losing Jewish sovereignty.

This skewed presentation isn’t an Abbas original. It had long been the hallmark of Israel’s domestic left-wing discourse, geared to argue that the two-state solution is the best offer Israel has, indeed that it’s indispensable.

Abbas not only picks on that thread. By stressing the apartheid motif, he again resorts to his persistent ploy of demonizing Israel. He misses no opportunity to blacken our image in a manner far more suggestive of an implacable foe than of a committed peace partner.

Directly in tow, is his appeal for greater international-donor handouts. The PA is in dire straits. Despite all the moneys sunk into it from abroad, it had failed to erect a credible functioning economic infrastructure. Hefty foreign contributions seem to have disappeared down Ramallah’s drain of corruption and/or incompetence. Right now, the PA can’t so much as pay its bills.

All this has taken a menacing turn following near-riots over cost-of-living hikes. And so Abbas has opted for his serial remedy – blame Israel, while demanding its assistance.  To try and compel Israel into bankrolling him, Abbas now agitates for renegotiating the Paris Protocol, the 1994 addendum to the Oslo Accord that governs economic ties between the two sides.

This isn’t a request of minor substance. It’s hardly a matter of yet another one-sided concession squeezed out of Israel in keeping with the pattern whereby it behooves Israel to repeatedly “demonstrate goodwill.”

We can only hope that the government will not be tempted at a moment of weakness to agree to amend the Paris Protocol. Not only would it lose Israel the paltry control it retains, but it would embolden Abbas to press for more without honoring his part of the Oslo bargain.

Herein lies the problem: Ramallah has consistently betrayed its Oslo obligations. Having serially sponsored terror, incitement and hostile international campaigns, it has plainly tried everything but peace.

Has anything changed between September 27, 2012 and now? Heck no!

Would ridding us of Oslo have injured us in any shape or form in 2012? Heck no!

Could ridding us of Oslo injure us in any shape or form in 2015? Heck no!

No matter how one scrutinizes the annual Abbas melodramas, there’s no getting around the fact that he seeks to scare us over and over with the same second-hand dud. His only marketable skill is staging a pathetic pageant and performing the same pitiable stunt of tossing a bombshell that might maybe in future detonate…

Too bad Abu-Mazen proved Ezer wrong. Replay after replay of the same formulaic skit, and we are still formally dogged by the deceased and decayed Oslo. So far, for 22 volatile years, the Arabs have only let us down – their commotion to the contrary notwithstanding.