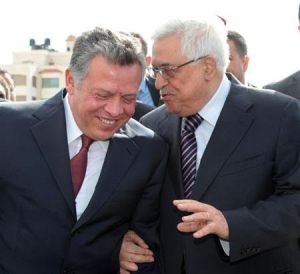 Abraham Lincoln once famously said that “no man has a good enough memory to be a successful liar.”

Honest Abe of course never encountered Palestinian Authority figurehead Mahmoud Abbas, who’s certainly a hugely successful liar. Nonetheless, Abbas, like most liars, does find it exceedingly hard to keep track of all the whoppers that incessantly escape his lips.

The more he fibs, the harder it becomes to bear in mind at each and every moment what version of which pretense he had used on each occasion and with whom. Eventually, even a consummate liar like Abbas is sure to slip up.

That’s what happened to him during his recent stopover in Amman, on the way back from Doha where he married off his grandson in sumptuous style. But Abbas, alas, found himself in a bit of hot water as soon as his visit began.

The Hashemite Kingdom’s loyalists didn’t take kindly to reports that Jibril Rajoub – Abbas’s fellow Fatah honcho and chairman of the Palestinian Football Association – had failed to vote for Prince Ali Ibn al-Hussein to head FIFA.  Ali is King Abdullah’s own brother who, owing to the monarchy’s non-too-regulated nepotistic inclinations, is also president of the Jordan Football Association. Rajoub’s attempts to kick Israel out of soccer’s international federation didn’t mitigate the royal umbrage.

Seeking to sooth the offended Hashemites, Abbas assured them that “the relationship between Jordan and Palestine is the relationship of one nation living in two states.”

Quite inadvertently, the above blandishment may well be the truest statement to have been uttered by Abbas in a very long time. It doubtless resulted from a memory lapse of the sort Lincoln judged that all liars are inevitably liable to experience.

Overwrought, Abbas briefly forgot to toe his own line and explicitly contradicted his own two-state refrain – the mendacious mantra about two states for two nations that’s reiterated everywhere as if it were infallible God-given gospel.

Abbas unintentionally admitted is that the so-called Palestinians and the so-called Jordanians are one and the same, that there’s no difference between them, that a two-state solution is already in force and that Arabs already control nearly 80 percent of Palestine. Hence, Abbas’s claim that he represents yet another nation that clamors for yet another Palestinian Arab state is nothing but an expedient scam.

The divergent Arab ethnicities, accepted at face value by the gullible non-Arab world, are all counterfeit. The Jordanians/Palestinians offer a cogent case in point.

Up until lately hardly any statesmen, observers or scholars dared question the region’s national divisions or the borders delineating them. The sole exception, not unexpectedly, was their inimical perception of the Jewish state’s legitimacy.  To all and sundry it seemed that Iraq, Syria or Libya were ancient nations with distinct characters and cohesive identities all their own.

Casting doubt on this was not only politically incorrect but was castigated as heresy of the most profane and preposterous kind. Most unwelcome were reminders about the imperialist post-World War I deals between Britain and France which blatantly invented nationalities, defined their jurisdictions and even assigned them rulers. Highlighting any of this was judged as arcane nitpicking, irrelevant and even subversive.

What the then-superpowers imposed on the Fertile Crescent just in the last century, for example, was accepted as irrevocable. Opinion-molders inculcated in the masses worldwide the notion that yesteryear’s capricious concoctions are for keeps. Doubters – few and far between – were derided and denounced.

Who, for example, cared that His Majesty’s government once sucked up to the Hashemite clan that ruled Islam’s holiest sites in what was known as Hejaz? In return for (not very valuable) Hashemite support during the Great War, Sharif Hussein bin-Ali, Mecca’s Hashemite emir (also self-proclaimed Caliph of all Muslims) was assured that his sons Abdullah and Faisal would be handsomely rewarded.

Hussein, by the way was the one who in 1924 lost control of Islam’s sacred city and surrounding provinces to a rival clan, the Saudis. Had he won, we’d be speaking today of Hashemite Arabia instead of Saudi Arabia (which is also no long-established monarchy in situ from time immemorial).

Abdullah, the older Hejazi princeling, was to get as his gift/payoff virtually four-fifths of the British Mandate over Palestine, which originally extended over both banks of the Jordan. It was all land designated by the League of Nations as the National Home for the Jewish people.

To be sure, Hashemite appetites weren’t quite sated by the freebee. Abdullah sought the title of Emir of Palestine – a country to which he had no previous connection whatsoever and not much of a notion about. Britain made him settle for Transjordan – on the east bank of the mini-river.

No Transjordanian nation appears in human annals and neither does Jordan, as the kingdom is now known.

Yet eventually it became useful, PR-wise, to claim that Palestine exists exclusively west of the mini-river, thereby justifying the campaign for a second Palestinian Arab state.

What today parades under the Jordanian moniker was conceived on Palestinian soil by Perfidious Albion. That was the firstdivision of Palestine. Betrayed, the Jews were left with only one-fifth of what was initially promised them and this puny remainder too has been violently disputed ever since.

If it’s any consolation, though, Palestine is as remarkably absent from history as is Transjordan/Jordan. In 135 CE, after the Bar Kokhba uprising, the Romans renamed Eretz Yisrael. They dubbed it Palaestina, with the expressed purpose of humiliating defeated Jews. Europe inherited the epithet and its latter-day English variant became what the British chose to call the land they mandated.

Local Arabs, who first deeply resented the name as an imposed alien import, later adopted it as their imaginary nation’s 9,000-year-old (!) appellation.  Ironically, they cannot to this day pronounce it correctly. In their diction Palestine has been warped into the Johnny-come-lately Filastin, a wholly fictional entity.

Palestine/Filastin never had any existence, self-determination, cultural uniqueness, linguistic distinctiveness or religious idiosyncrasy to differentiate it from the surrounding Arab milieu.

But then neither did Iraq or Syria, both of which feature prominently in the 1920s Hashemite saga. Out to recompense their Hashemite lackeys, the Brits enthroned Abdullah’s younger brother Faisal as King of Greater Syria on March 7, 1920.

It was as simple as that. Nations were invented, named arbitrarily according to the cultural precepts of the new European powers-that-be, and then cynically served these powers’ interests.

Conflicting interests inevitably kindled quarrels among the imperialist overlords. Paris, which claimed sway over Syria and Lebanon (another satellite of its manufacture), owed the Hashemites nothing. It had no use for Faisal and considered it colossally galling of London to have crowned him king in Damascus. Therefore – on July 24, 1920 – the French disdainfully chucked out Britain’s protégé.

In response, Britain earmarked its follow-up fabrication, Iraq, for Faisal’s subsequent make-believe realm. His next coronation took place in Baghdad on August 23, 1921.

The Iraqi Hashemite dynasty was deposed in 1958 when its third-in-line, Faisal II, was assassinated and his corpse dragged through Baghdad’s streets. Even so, England’s unnatural Iraqi fusion continues to disturb the world.

That’s because artificial Iraq, like synthetic Syria, doesn’t mirror any ethnic reality. Both are hopeless hodgepodges of tribes, clans and incompatible religions. In no way, shape or form do any of these assemblages remotely resemble what in western terms constitutes a nation.

Moreover, the very last thing components of the mismatched mishmashes want is to cozily coexist with each other beneath one national banner. They only did so involuntarily, when under a tyrant’s thumb. Despots like Saddam Hussein, Bashar Assad and Muammar Gaddafi kept a tight lid on their respective non-nations until the West arrogantly-cum-ignorantly sought to democratize those who didn’t quite yearn to be free (leastways not as we conceive of freedom).

The upshot of the misnamed “Arab Spring” – as some uncool Israelis had the temerity to warn from the outset – is that the bogus nationalities of the Arab sphere disintegrate chaotically before our eyes.

If anyone can lay claim to utmost mastery of the thriving arts of history-forging it’s the Jordanians. Their entire state, nationhood and very identity are a sham. Had the international community not been sympathetically predisposed to lap up the lie, Jordan obviously couldn’t pull it off. Its wholesale deceit hinges on a world contentedly complicit in hoodwinking itself – to no small measure because it’s loath to overcome its congenital Jew-aversion.

So the deceit blithely thrives in a world so eager to be deceived. The recent-vintage Jordanian and Palestinian pseudo-ethnicities are presented as bona fide nationalities. Moreover, it’s brazenly asserted that they are dissimilar and deserve self-determination in separate homelands.

This cock-and-bull contention begat the image of the stateless Palestinians – aggrieved indigenous inhabitants, striving desperately to throw off the yoke of foreign (Jewish) occupation. It serves as the perfect purportedly principled pretext to chop off another chunk of what pitifully remains from the originally designated Jewish homeland.

This is Abbas’s outright aim and he’s on the whole an unquestionably successful liar – not least because the international community is eager to lap up any lie about Jews. The dysfunctional family of nations probably wouldn’t care that he fleetingly forgot to prop up his own gargantuan con. However, we Israelis cannot but care that our purportedly trustworthy peace-partner barely remembers which outrageous lie he told last.

In his own version of Lincoln’s remark, Mark Twain – another American immortal – quipped that “if you tell the truth, you don’t have to remember anything.” That means that Abbas has to remember everything, all the time and that’s not easy – as his careless candor shows.