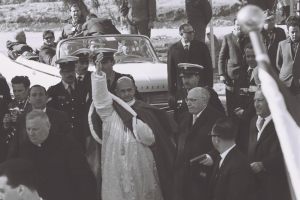 Pope Paul VI at Meggido in 1964: He made sure the name Israel would never escape his lips. President Zalman Shazar stands to his right.

The Vatican’s recognition of a Palestinian state (which despite its popularity abroad does not in fact exist) shows that the Holy See can be awfully speedy when it so suits it – even headlong and precipitate.

This is quite a departure from our Jewish experience with the Catholic hierarchy. With isolated exceptions, Jews have consistently encountered an entrenched severity, even hardheartedness – and that’s putting it very mildly.

With impetuous haste the Vatican rushed to recognize a state that so far consists of only radical Muslim bands distinguished only by their brands of zealotry. This is in stark contrast to the excruciating tardiness, indeed the unconcealed reluctance by the same church to recognize Israel.

The Vatican’s ill-will lasted decades after the Jewish state was born, after it survived genocidal attacks by seven Arab armies only three years post-Holocaust, after it successfully absorbed millions of Jewish refugees and after it created a functioning democracy second to none, along with all the institutions of civil society.

Despite Israel’s exemplary attributes of sovereignty, the Vatican remained sour, begrudging and glacially aloof – and that again is resorting to understatement.

Only in late December 1993 did the Vatican finally deign to recognize the Israel that was born in mid-May 1948. Moreover, the Vatican’s ultra-belated recognition remained hesitant, as if the ecclesiastical bureaucracy’s gut instincts prevented it from at all stomaching the notion of Jewish sovereignty.

The difference screams to High Heaven and anyone who denies a brazen double standard simply refuses to admit the truth staring us all in the face.

The adjective which most immediately comes to mind to describe the Vatican’s blatant bias is sanctimonious. Its dictionary definitions are “affecting piety, making a display of holiness, showing false righteousness, marked by hypocritical virtue.” All the above fit the Holy See to a tee to say nothing of the fact that sanctimonious originates from the Latin sanctimonia(sanctity) and sanctus (holy).

Galling pontifical predispositions or preconceptions were even abundantly evident during the visit here last year of apparent nice-guy Pope Francis.

He went to the trouble of publicly disagreeing in an almost grouchy demeanor with Prime Minister Benjamin Netanyahu’s innocuous comment that the historical Jesus spoke Hebrew. Concomitantly, Francis indicated no smidge of an objection to the depiction of the baby Jesus swaddled in a Fatah keffiah and represented as a Palestinian Arab.

Clearly, historical pedantry isn’t applied everywhere. This presumably is why the same Vicar of Christ could bow his head before an anti-terror barrier inscribed with graffiti that likened it (in English) to the Warsaw Ghetto enclosures. Not only was there no whisper of an objection to the slanderous villainy of the comparison but it appeared to have been consecrated with papal sympathy.

This is especially exasperating from a pope whose 1940s predecessor should have at least protested the mass-murder in a Catholic land of the Jewish multitudes imprisoned, tortured and starved within the confines of the real-time Warsaw Ghetto. Yet Pius XII managed not to instruct his followers that the premeditated annihilation of the Jewish people might not be quite “Christian.”

Pius’s postwar misdeeds (like refusing to return hidden Jewish children and aiding the escape of Nazi war criminals), when he was obviously free of Fascist and Third Reich intimidation, attested to his innermost predilections. Unsurprisingly, he was the one who refused to recognize Israel upon its rebirth.

His newspaper, L’Osservatore Romano, editorialized on that occasion that “modern Israel is not the true heir of Biblical Israel, but a secular state… Therefore the Holy Land and its sacred sites belong to Christianity, the True Israel.”

Since a Palestinian national entity never existed in the entire annals of mankind, there’s presumably no impetus for the Vatican to make similar declarations regarding Mahmoud Abbas’s preposterous claims that the Holy Land and all its sacred sites have for 9,000 (!) years exclusively belonged to an Arab Palestine.

The Vatican, significantly, was one of the first to extend recognition to the PLO, after it was officially founded. However, that very year, 1964, the Vatican pointedly still refrained from recognizing Israel – 15-and-a-half years after its independence. That was epitomized during Pope Paul VI visit here, where inordinate caution was exercised not to impart the minutest impression of recognizing the Jewish state.

The pontiff entered Israel via Meggido, an altogether strange choice, and spent 11 hours here on January 5. He made sure the name Israel would never escape his lips. He mentioned obliquely only unnamed “authorities” in lieu of acknowledging even Israel’s de facto existence. He took care to call Israel’s president “Mr. Shazar” only.

Some papal apologists contend that the Vatican must protect the Holy Land’s diminishing numbers of Catholics and their holy shrines.

In the region as a whole, Christians today account for some 2% of the population versus 20% 100 years ago. Lebanon’s Christians are at the mercy of the Shiite Hezbollah, whereas in Syria Christians are victimized by Jihadi fanatics. In Iraq they are walloped by everyone. In the Palestinian Authority Christian numbers are falling sharply too, as is evidenced by the Muslim majority in once-Christian Bethlehem. Gaza’s Christians are running for their lives.

The one steadily growing Christian community in the Mideast is to be found in much-maligned little Israel. Only under Jewish sovereignty are Christians safe and free from serial terror and harm. But the one beacon of genuine liberality in an unkind and pitilessly intolerant region is hardly likely to win accolades from the Bishop of Rome.

Ingrained disingenuousness apparently prevents the Church from admitting that the dangers to either Christianity or Christian sites in this region aren’t posed by Israel. Equally, it dares not admit that the anti-Christian ardor that has swept through the embattled Mideast (especially since the advent of the misnamed Arab Spring) has not skipped past Abbas’s bailiwick.

The papal radar seems to have incredibly missed the anti-Christian repressions of the so-called Palestinian state that the Vatican has shown such alacrity to recognize. This mindboggling selectivity of outrage can only mean that there’s an evident disinclination to report and react. Strikingly, some anguish isn’t worthy of pontifical notice.

To be sure, many local Christians are hardly a friendly force so far as Israel is concerned – to no small degree feeling obliged to curry favor with the Muslim and nationalist Arab majorities that threaten them. Subliminal Stockholm Syndrome symptoms – or cynical calculations that tolerant Jews needn’t be sucked up to – embolden some of the region’s beleaguered Christians to fearlessly hurl invective at Israel. The same ostensibly goes for the Holy See.

Currently, Christian travails in Arab lands are tragically evocative of the ethnic cleansing against the Jews who had once resided in the same countries, long before the first Arab emerged from the Arabian Peninsula. But when Arabs rendered their realm Judenrein, the Vatican again kept amazingly mum. Jewish suffering wasn’t listed among Church interests.

Neither were Jewish holy sites. The Vatican failed to voice even low-key displeasure regarding the Arab Legion’s illegal occupation in 1948 of Jerusalem’s eastern half. At the time, the city was home to some 100,000 Jews and 36,680 Muslims and it boasted a solid Jewish majority since the first census was taken there in the early 19th century.

None of this mattered to Rome, not even the brutal expulsion of the Old City’s ancient Jewish community. Neither did the 19-years of Arab occupation of east Jerusalem during which Arabs destroyed 58 synagogues, sadistically despoiled graves at the 3000-year-old incomparable Jewish cemetery on the Mount of Olives and denied Jews the right to pray at the Western Wall.

There was no papal indignation until in 1967’s Six Day War Israel undid the Arab illegality (only following extreme belligerent provocation).  Instantly the Arabs’ 19-year illegality was perceived as the legality that must be restored.

In his effort to enlist support for the cause of renascent Jewish nationalism, Zionism’s foremost proponent, Theodor Herzl, secured an audience with Pope Pius X on January 25, 1904. The papal rebuff couldn’t have been more dogmatic or categorical: “The Jews did not recognize Our Lord, therefore we cannot recognize the Jewish people… The Jewish religion was the foundation of our own; but it was superseded by the teachings of Christ, and we cannot concede the Jewish religion any further validity.”

The Pope also told Herzl that if Jews settle in Palestine, “the Church would make sure that there were churches and priests there to baptize them.” Similarly, the Pope’s Cardinal Secretary of State had previously stressed to Herzl that “in order for us to come out for the Jewish people in the way you desire, they would first have to be converted.”

The antipathy to Jews extended even to Jewish physical survival during WWII. Pius XII’s wartime Undersecretary of State Domenico Tardini viscerally opposed asylum for Jews in the internationally designated Jewish National Home. “The Holy See has never approved of the project of making Palestine a Jewish home,” he explained, “Palestine is by now holier for Catholics than for Jews.”

Pius’ Cardinal Secretary of State Luigi Maglione also postulated that a Jewish homeland is somehow directly inimical to Catholics whose “religious feelings would be injured and they would justly fear for their rights if Palestine belonged exclusively to the Jews.”

This is the very same Secretary of State whom the United States’ representative to the Vatican, Myron Taylor, informed in September 1942 that the Jews were being deported en masse eastwards and are there systematically put to death. Maglione stayed unperturbed and indifferently responded by pooh-poohing the American revelations.

Each individual pope brings with him his own personal style and proclivities. Yet while external trappings and idioms may mutate, the Vatican’s organizational zeitgeist, its officialdom’s inbuilt bias, remains unaltered. The Holy See’s unholy sanctimony of yesteryear callously lives on.

11 thoughts on “Another Tack: The Holy See’s Unholy Sanctimony”