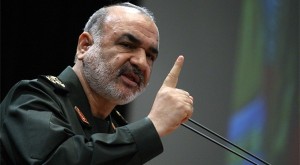 Brigadier General Hossein Salami: “They will not even be permitted to inspect the most normal military site in their dreams.”

Who says history has no sense of humor? Just as US President Barack Obama seeks to hide away the salami slices shaved off his deal with Iran, an Iranian named Salami exposes an extra-thick and very telling slice.

Without much ado, the Deputy Commander of Iran’s Revolutionary Guard, Brigadier General Hossein Salami, gave the lie to one of Obama’s most significant contentions about the deal that America’s Commander in Chief is cooking up with the nuke-craving ayatollah regime.

Significantly, Salami didn’t whisper off the record. He didn’t speculate about hearsay in a back room. He didn’t impart hints given to conflicting interpretations. Salami said his piece openly on state TV. He announced out loud that, contrary to American claims, there would be no foreign inspections of Iranian military sites. Period. End of. No quibbling.

Inspections, railed Salami, would be “selling out.” To hear him, “a tour of military facilities by foreign inspectors is to be equated with the occupation of a country. Iran will not become a paradise for spies. We will not roll out the red carpet for the enemy… They will not even be permitted to inspect the most normal military site in their dreams.”

Another prime salami slice was thereby confidently and contemptuously chopped off by Salami. Was official America taken aback? Embarrassed? Heck no. In her characteristically convoluted way, deputy State Department spokeswoman Marie Harf disposed of a query about Salami’s salami-slicing:

“We are still negotiating over all of the people and places where the IAEA will have access required when it comes to possible military dimensions [PMD]. We have a path forward here, an agreement that Iran will undertake a PMD access list process to form out that list when it comes to potential military sites. That’s part of what will be negotiated over the next three months, but in principle, we have agreement that that is a process they will undertake.”

Need a translation? Basically Harf told badgering reporters to buzz off because there’s still work to be done on the final details. Dismissing pesky skeptics for supposedly being out of the loop is one time-tested method to avoid salami-slicing angst – for a while at least.

To be sure, salami-slicing isn’t a ploy invented by the Iranians, Arabs or any other cunning Mideastern players, although salami-slicing is an established local specialty. This familiar, if infamous practice has long been a favorite of assorted shysters – whether in business, party politics or geopolitical machinations.

The essence of salami-slicing in the figurative sense involves small, occasionally innocuous and disconnected actions which, taken in isolation from each other, look inconsequential. Embezzlers, thieves and con-artists, for instance, are adept at paring off apparently paltry amounts in regularly repeated transactions. Initially nobody notices the minor losses. Over time, however, these accumulate to considerable sums.

In politics the salami technique was nefariously used by the Soviets to install communist regimes in post-WWII Eastern Europe. The new overlords started dominating the politics of countries under their control slice by slice, until the entire sausage was devoured.

The Salami indeed entered our political lexicon courtesy of Hungary’s Stalinist puppet Matyas Rakosi who referred to the means employed by his party in the late 1940s as szalámitaktika – Salami tactics. Rakosi maneuvered his opposition to slice off its rightist flank and then its center. Soon only Communist collaborators remained.

Israel’s own Oslo boosters became devoted dupes, making excuses for and downplaying each of Yasser Arafat’s incremental violations of the Accords. Arafat’s duplicity was already evident at the time of the swanky September 13, 1993 signing ceremony ostentatiously produced by that irrepressible impresario, Bill Clinton.

Arafat quickly informed viewers on Jordanian TV that the Oslo deal isn’t for keeps and is indeed part of the “phased plan” to destroy Israel – i.e. to terminate “the Zionist Entity” salami slice by salami slice. Like General Salami of Tehran, Arafat too took little trouble to disguise his aims – particularly when it came to public pronouncements.

Prime Minister Yitzhak Rabin was hoodwinked by Foreign Minister Shimon Peres and Peres wouldn’t part from his grand design just because Arafat exposed it for salami-tactic that it indeed was.

Rather than take Arafat’s word for it, Peres expediently explained it away as having been uttered “for internal consumption.” Of course the very fact that the Arab masses all around us clamored for something very different from a lasting peace should have cooled Peres’s ardor. However, he wasn’t the sort to let reality mess with a good pipe-dream and Nobel Prize prospects.

Not long after, in his May 10, 1994 address to Muslims in South Africa, Arafat proudly crowed that Oslo was a ruse, like the fraudulent 7th Century Kureish truce to lull the defiant Jewish tribe into complacency until the opportunity for attack presented itself and the insubordinate Jews were slaughtered.

In July 1994 Arafat entered Gaza triumphantly, like a conquering hero. Israeli intelligence was well aware that in his convoy Arafat smuggled arms into Gaza, as well as wanted terrorists. It wasn’t an auspicious overture to true peace but Peres ordered the episode kept strictly under wraps so as not to let treachery spoil the festivities.

We won’t even dwell on the buses that soon began exploding everywhere in Israel. The dead and wounded were described by Rabin as “victims of peace.” Rather than declare Oslo null and void, Israel’s headliners sought to convince the citizenry that peace is a Moloch which requires human sacrifice to be sated. They exonerated Arafat and ascribed the bloodshed to generic “enemies of peace.”

Arafat, though, kept on frustrating them with a steady supply of instantly recognizable salami-slicing recipes. The pungent salami smell couldn’t be more unmistakable than on January 30, 1996 (well into the Oslo fiasco), when Peres’s blusterous peace-partner addressed Arab diplomats in Stockholm. The Nobel Peace laureate judged that the “peace process” must inevitably result in Israel’s downfall.

“We Palestinians will take over everything, including all of Jerusalem,” Arafat exulted. “Peres and Beilin,” he emphasized, “already promised us half of Jerusalem.”  The rest will be won, salami-slice at a time.

According to Arafat, Israel’s collapse hinged on “PLO efforts to split Israel psychologically into two camps… We plan to eliminate the State of Israel and establish a pure Palestinian State. We’ll make life unbearable for Jews by psychological warfare and a massive influx of Arabs.”

In other words, Arafat promised to continue slicing the salami. His steadfast assistant/understudy was Mahmoud Abbas (Abu-Mazen), who now dons Arafat’s mantle in Ramallah and like him dishes up salami slices to a ravenous world, while posturing simultaneously as the pitiable underdog and the valiant altruist.

By the time January 2002 rolled around, the Second Intifada raged and Arafat’s complicity in the Karine A affair couldn’t be swept under the rug. Israel had seized a mega-shipment of 50 tons of weapons from Iran to the Palestinian Authority exactly while special US envoy, General Anthony Zinni, conferred with Arafat in yet another bid to restart the moribund peace haggles.

On board the Karine A were rockets, missiles, high explosives, shells, sniper rifles, Kalashnikovs and ammo. The lot was valued, all told, at some $15,000,000. So much for peace. But considering Arafat’s volubility all along, no one had the right to even pretend to be surprised.

The same goes now for Obama’s Iranian interlocutors. Like Arafat, they say it as it is and they say it often. Yet for Obama, propping up the sham appears more important than the in-your-face reality.  The hype about the process overrides its ostensible objectives.

One day after Obama issued a fawning greeting to the Iranian people on the occasion of the Persian New Year, Iran’s supreme leader, Ayatollah Ali Khamenei reiterated the “death to America” chant to cheering crowds.

When asked if America can negotiate in good faith with Khamenei’s ilk, White House Press Secretary Josh Earnest prevaricated: “What we have seen is — we have seen the Iranians sit down at the negotiating table and demonstrate a willingness to have constructive conversations.”

Later, in a response to CNN, the White House belittled the incident as having been “all intended for a domestic political audience.” That surely makes it OK.

When Iran subsequently maintained that all sanctions would be rolled back “in one day,” US Undersecretary of State Wendy Sherman commented on MSNBC that “we understood that our narratives were likely to be somewhat different.”

Not to beat around the bush, Iran’s salami-slicers were given the green light to keep slicing away. No wonder Obama in no-time suggested openness to the notion of the immediate repeal of all sanctions. That piece of salami appears to have successfully gone under the knife.

Obama’s indulgence for Russia’s decision to supply Tehran with S-300 missiles constituted more of the same readiness to countenance any variety of salami-slicing.

This is way worse than the Oslo calamity. The stakes are incomparably higher. Instead of conventional warfare, the threat facing Israel is nuclear obliteration. But who cares? Obama says he has our backs and that alone should suffice to keep us sweet and help us sleep soundly at night.

Quite obviously, to dull our vigilance Obama needs the services of Peres-style barbiturate-peddlers at the highest Israeli echelons. But alas, the current government in Jerusalem doesn’t collaborate with the current White House occupant’s efforts to obfuscate the sliced salami and pass it off as peaches and cream.

His refusal to play along gives Prime Minister Benjamin Netanyahu top billing on Obama’s “chickenshit” list. Netanyahu is scathingly scorned as a delusional irritant who disturbs the peace of the presumed guardian of global goodwill.

Peres of course faced no recriminations. He always courted international favor and lapped up the world’s accolades regardless of the cost to Israel. But anyone who squawks about insidious schemes upsets the seeming stability. Nothing new here. Those who dutifully sounded the warning bell weren’t kindly regarded, even at the darkest hour for Jews.

Chaim Weizman, who in time would become Israel’s first president, raised the alarm after the 1938 Nazi-perpetratedKristallnacht in Germany, a riotous outbreak of orchestrated pogroms that presaged the Holocaust. He would later recall international vexation with the Jews for making a fuss – the same as is now the case regarding the Jewish state’s fuss about Iranian salami-slicers.

“Our protests,” Weizman noted, “were regarded as provocations. Our very refusal to subscribe to our own death sentence became a public nuisance.”

11 thoughts on “Another Tack: Salami slices some salami”