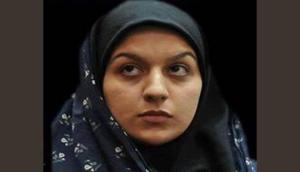 A young woman – 26-year-old Reyhaneh Jabbari – was hanged last Saturday from the gallows in Tehran’s notorious Evin Prison. Her crime was self-defense.  She struck down an attacker as he attempted to rape her when she was still a teenager in 2007.

President Hassan Rouhani, who won election last year on a purportedly liberal reformist platform, failed to intervene and commute the death sentence imposed back in 2009.

If anything, this tragedy underscores the gaping chasm between the regime’s “make-nice” affectations toward the international community and the unchanging face of the harsh ayatollah rule at home.

Jabbari’s sad story exposes Iranian hypocrisy and double-dealing vis-à-vis the West, which could barely contain its alacrity to ease sanctions on Tehran as soon as Rouhani was sworn in.

Presumably, according to American and EU pronouncements, supposedly less hard-line Rouhani (despite the ayatollahs’ suspicion-arousing backing) is a harbinger of change both as far as the repressive domestic theocracy is concerned as well as his country’s nuclear ambitions.

Israel’s warnings that the West willy-nilly allows Iran to develop nuclear weapons are scornfully ignored abroad. The hanging of a young rape victim for the crime of fighting off a sexual predator further gives the lie to claims of Iranian liberalization. Nevertheless, there’s no meaningful outrage in the international community, save for scarcely audible official lip-service and obligatory denunciation from Amnesty International.

But Iranian duplicity can no longer be swept under the rug of expediency and realpolitik in the West.

Had Rouhani’s election truly heralded an overhaul of Iranian tyranny, a way could have been found to save the unfortunate young woman’s life. The handy excuse that was proffered for her heartless execution was that the relatives of the dead man had to agree to a reprieve but they refused to do so.

The Rouhani regime cited Koranic law as leaving it no other “legal recourse” but to put Jabbari to death.

However, reliance on precisely this sort of uncompromising religious despotism is what makes the current powers-that-be in Tehran untrustworthy in regard to their nuclear project, terror sponsoring as well as cruel authoritarianism domestically.

There will always be a Koranic pretext for why Iran cannot behave as it appears to have solemnly promised in order to avoid punitive measures.

How can the Ayatollahs be expected to show moderation toward “Little Satan” Israel when they are so brutal regarding their own population? What moderation is shown Iranian women?

Their lives are over in case of any sexual abuse. If they defend themselves, they are condemned to death. Iran, it ought to be noted, has the world’s second-highest rate of capital punishment, after China. By September 30, there were 531 executions this year in Iran.

If the assailed Iranian women don’t resist, they are branded as “tainted” and ostracized in the best case scenario. But they can expect far worse than lifelong shame and shunning.

Sweeping Iran these days is an unprecedented spate of terrifying acid attacks on young women whose only crime appears to be the fact that someone in their proximity had determined that they aren’t properly covering their hair as mandated by strict Shiite dogma. For that they are disfigured and in some cases even blinded.

Little official action is taken to counter this terror in the streets. The regime’s energies are almost exclusively focused on scamming Washington and Europe and achieving a dream deal that would effectively lift away all trade and financial restrictions but leave Iran on the nuclear threshold with the ability to produce atomic bombs.

Grudgingly we must admit that Tehran had essentially managed to hoodwink the US, Britain, China, France, Germany and Russia. In fact, more than Iran has managed to pull the wool over the eyes of the international coterie, the nations of the world desperately wish to be fooled.

They prefer to believe (or pretend to believe) that by some miraculous happenstance Iran has transformed itself overnight from a ruthless theocracy – whose agenda inter alia includes the subjugation of women and wiping Israel off the map – to an agreeable member of the international community.

10 thoughts on “What Moderation?”