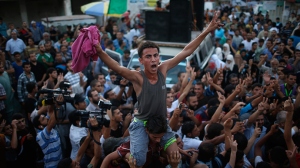 Anyone with pretensions to make sense of what parades as reality in the Mideast must first know mirrors. Nothing in this region is what it seems at first glance and that’s as true for Jews as it is for Arabs. In order to figure anything out, it’s essential to first examine the particular mirror used by each side.

The Israeli mirror is illuminated by ultra-powerful and harsh fluorescent beams from any and all possible directions. Theoretically, the resultant reflection is super-true-to-life. However, the intense brightness is unforgiving and uncomplimentary. It seems to bring out and accentuate apparent flaws whose existence in natural conditions is highly doubtful. It makes us look bad even when we strike quite a fine figure.

Overly analytic and always breast-beating, we Jews can take an ordinary mirror and mercilessly turn it into an instrument for searing our own image in our own eyes. That is something we’ve been uniquely accomplished at for thousands of years throughout our long history, going back to biblical days. We always second-guessed and always pondered where we went wrong.

It can be stated with no hesitation that there’s no other nation with an analogous predilection for heaping so much scorn on itself.

At the diametrically opposite end of mirror-usage reside our neighbors. They never go for plain plane mirrors and they never did.  The Arab world’s favorite looking-glass is the crazy mirror – a.k.a. the carnival mirror – that lowbrow staple of old-time funfairs. No use expecting verisimilitude here. It’s not sought and it is not welcome. The idea isn’t to reflect reality but to invent its deceptive alternative.

Curved mirrors, both convex and concave, distort shapes weirdly and wickedly and render the factual and the imaginary indistinguishable. These mirrors are further adroitly shifted and retracted. With a bit of smoke, conjurers can altogether cunningly both obscure and embellish the truth in a spellbinding hallucinatory extravaganza.

This is why Israelis emerged somewhat downhearted from the latest conflict with Gaza while Hamastan lustily celebrated the triumph it proclaimed absurdly among the ruins.

Both sides here are decidedly loony but in significantly different ways and that difference encapsulates the whole story. It reminds us that we don’t share anything close to the same logic and that we don’t even think or communicate on the same wavelength. It accounts for why there can never be a meeting of the minds between the self-flagellating objectivity of Jews and the illusory subjectivity of Arabs.

We couldn’t be more unalike.

Gaza erupted into a stupefying shindig in its devastated streets, replete with fireworks, confetti, carousing, music, frenzied dancing and syrupy sweets distributed to the merrymakers. The rationale for the revelry was the destruction purportedly wreaked upon Israel. Yet outside the insane asylum’s hall of mirrors, it’s obvious to any observer that Israel emerged relatively unscathed.

The very fact that nearly 5,000 rockets and other assorted projectiles were lobbed indiscriminately at Israeli civilians was held up as a game-changing blow to the Jews, yet only Gaza’s deforming mirrors could misshape perceptions to that extent. Israeli anti-rocket ingenuity exposed the Gazan investment in firepower for all its preposterous worthlessness and anti-social wastefulness. The same goes for the labyrinthine attack tunnels into which Gazan money and materiel were sunk.

But the Gazans were beguiled by the image in their cognition-warping mirrors. They were told that the very fact that they hadn’t been wiped off the face of the planet constitutes a victory. They only weren’t told that no one in Israel ever wanted or planned to wipe them out, hence no cause for rapture.

They paid with over 2,000 fatalities and catastrophic damage for attacks on a country that doesn’t really wish them ill and that in fact continually supplies them with provisions, water and free electricity (which Israel mind-bogglingly kept on doing while Gaza wantonly rocketed the hand that feeds it).

A softer enemy than Israel has never existed. Gaza was mad to goad Israelis into the warfare which the Israelis were loath to wage and/or escalate.

The ceasefire that Hamas honchos eventually begged for was precisely the one they could have had at the outset of hostilities and during its many intervals. The conflict’s prolongation won Hamas no concession – nothing whatsoever that wasn’t already granted it at the end of the last conflict.

It’s as if Gaza craved punishment and relished the victimhood. Why? Because once the festivities fade, Gaza’s mirror-masters will move and maneuver their gear and reflect a pitiable plaintiff image to the world – not of rollicking roisters but of disconsolate and dispossessed casualties of Jewish villainy. Since the world loves to pillory Jews, this mirror trick ought to go over real big.

Meanwhile, across the Green Line, we Israelis – intrinsically inclined to home in on the gloomiest aspect of any episode – view Gaza’s boisterous bashes and train more unflattering spotlights at our mirror. In the blinding glare we find proof that we hadn’t won. Otherwise, why would Gaza be partying?

Somehow we forget that the Arabs we wallop always whoop it up. After the trouncing of the 1956 Sinai Campaign, Gamal Abdel-Nasser was revered as the hero of the Arab world. He was feted as the victor even after his Six Day War debacle.

The Yom Kippur War should have caused deep dejection among all Arabs because despite a surprise attack they still ended up losing, with Israel entrenched across the Suez Canal in Egypt proper and surrounding the entire Egyptian Third Army (which was eventually only saved by America). Any historiography that leaves this out is bogus.

Arab euphoria and exultant jubilation don’t hinge on actual success. The Arab sphere’s penchant for deception isn’t only outwardly directed. It begins first at foremost with self-deception. But the concentrated luminosity we flash into our mirrors often blinds us to what we, as inhabitants of this region, should never overlook.

Gaza’s hijinks should never be confused with the truth.

The truth is that Gaza was dealt a dreadful beating. Yet considering its disdain for reality, nothing much can keep it from getting the urge to do us harm again. It’s the Arab way.

After seven Arab armies attacked just-born Israel in 1948 and lost abysmally, no lesson was learned in Arabia. Terror offensives, some of them horrific, were mounted against Israel soon after. And the 1956 rout was itself followed with another concerted attack to annihilate Israel in 1967. And when that turned into a degrading flop, the Arabs launched the War of Attrition and an unprecedented terror campaign, which only gained homicidal impetus when they failed to vanquish Israel in 1973.

The likelihood therefore is that Gaza won’t stay peaceful but that doesn’t mean that we lost.

Yes, we possess the power to quash Hamas once and for all but besides risking international ostracism, we’d inflict on ourselves an atrocious cost in our own soldiers’ lives. It’s easy to rant and rave about crushing Hamas but to what end exactly?

The upshot of Hamas’s ouster would be reinstating Mahmoud Abbas and his Fatah honchos in Gaza. Is that reason enough for us to spill the blood of untold hundreds (if not more) Israeli soldiers? Do we want to sacrifice our boys for Fatah’s sake?

Has Fatah, when it so suited it, not been as sadistic and bloodthirsty an enemy as Hamas? Is one evil better than the other? Have we forgotten Force 17, Tanzim or al-Aksa Martyrs Brigades? Is our memory that enfeebled?

Besides, let’s own up: Fatah rule in Gaza entails dangers far surpassing all the in-your-face malevolence of Hamas because Fatah bamboozles the world with make-believe moderation. Re-established in Gaza, Fatah would claim to represent all Palestinian population segments and will thereby ramp up international pressure for full Israeli withdrawal to pre-Six-Day-War lines. Do we seriously wish to grant Fatah such leverage?

Suppose we give in and cede even a bit of Judea and Samaria to Abbas – what then? Odds are that he’d lose those territories, just as he lost Gaza to Hamas. Whatever we’ve seen in the western Negev will be visited with immeasurably more lethal impact on the densely-packed central region of Israel, where no shot from Kalkilya or Tulkarm can miss.

If the latest Gazan episode teaches us anything, it is that we mustn’t surrender even a grain of Judean and Samarian soil to any Palestinian of any faction. Otherwise, the suffering of Israel’s south would become a laughing matter in comparison to what could be unleashed on Israel’s crowded heartland.

Besides their considerations of massive battlefield bloodletting, Binyamin Netanyahu and Moshe Ya’alon abstained from going full force against Gaza in order to avoid installing in power there an enemy that would (directly or indirectly) bring Gaza’s dubious blessings daily to the Dan and Sharon regions, that would ravage Jerusalem and leave tiny narrow-waisted Israel without air links, cut off and shunned.

Wanting too much and carping about not winning enough (as some on the Right do) could bring us faster than we realize to the brink of disaster. Replacing Hamas with Abbas (as all too many on the Left wish) can eventually cost us our sovereignty and survival.

Abbas is no less treacherous than Hamas but pupillary light reflex serially contracts the visual pathways of all too many tendentious commentators, of self-serving politicos and – via them – of average folks.

Those who gaze fixatedly into the super-severe lights flooding our own mirror lose sight of the most fundamental hazards to our self-preservation. In the long run, a little photophobia can be wholesome – even life-saving.