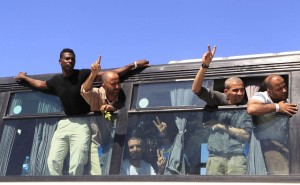 The bamboozlers who gave us Oslo and its deformed derivative Disengagement have never expressed the slightest contrition and never begged the nation’s forgiveness – not even now when Gazan rockets threaten Israel’s heartland. The same goes for their craven accomplices, who ran with the pack and derided nonconformist compatriots who dared protest. But while the promoters of folly bask in self-proclaimed infallibility, they’re uncannily quick to blame others for their sins.

This is hypocrisy most foul and it’s not limited to territorial surrenders and the chimera of attaining peace and acceptance by rewarding belligerence.

Take, for example, the inflammatory issue of swap deals with terrorists and how it’s tied to the abduction and execution of three innocent boys on their way home from school. To hear our talking heads and swaggering former security chiefs, this heartrending saga started with Prime Minister Binyamin Netanyahu’s 2011 decision to trade 1,027 duly convicted Hamas murderers and mass-murder masterminds for hostage Gilad Schalit, a.k.a. “the child of us all.”

It’s as if precedents weren’t already set and as if the Schalit kidnapping wasn’t in itself the result of previous cowardly surrenders to extortion. Worse yet is the fact that the very ones who spearheaded the campaign to do the deal with Hamas now pin the blame for what they actively advocated on the man they had anyway always viscerally opposed. He was to blame when he didn’t want to do the deal and he’s to blame for having done the deal.

They conducted a colossal pro-deal crusade and it would have taken nerves of super-fortified steel to defy it. Politicians on the whole – especially the sort inclined to heed the vox populi, imbecilic as it may be – are unlikely to outbrave the orchestrated outcry. Netanyahu tried but finally gave in. And when he did, the brainwashed nation stupidly celebrated and heaped profuse praise on what was essentially capitulation.

The fatal shooting of Baruch Mizrahi hadn’t yet occurred but it was a foregone conclusion that the released murders would murder again. Nevertheless, throngs of surreally ecstatic Israelis lined the roadways to get a glimpse of their highly questionable hero, Gilad. In time he became a celebrity. His father, Noam, had the unmitigated temerity to run for the Knesset (on the Labor list) for no other achievement than hoarsely demanding Hamas be paid the full asking price.

And hot on the revelation that it was Ziad Awad – a murderer released for his son’s sake – who murdered Mizrahi, Noam Schalit brazenly argued that “we didn’t demand the prisoner release and we weren’t the ones who put together the list of which prisoners were to be freed.” Yeah, right! It all happened because Martians made a ruckus for reasons understood only on Mars. Little green extraterrestrials were the ones who twisted Netanyahu’s arm and he buckled due to his own inexcusable caprice. Ergo, all’s indisputably Netanyahu’s fault!

Who can forget the billboards that greeted us on every road junction, replete with jumbo photos of swap-endorsing ex-Shin Bet head honchos? How on earth can our misguided masses forget Ya’acov Perry, Ami Ayalon, Carmi Gillon, Danny Yatom and other know-it-alls who willingly served the PR firms that advised the Schalits on how to defeat Netanyahu. How confidently they pontificated to us lesser intellects that, as Perry put it, “Israel is strong enough both militarily and in intelligence-gathering capabilities to handle released murderers with blood on their hands.”

Those of us, including the writer of these lines, who throughout remained disobligingly unconvinced were denigrated and portrayed as humanity’s hardhearted enemies. Schmaltz became trendy and the trendsetters laid it on shamelessly thick. Crooner Aviv Geffen produced a Ma’ariv op-ed in which he called Gilad a “butterfly of wars.” Then, addressing Netanyahu, he socked it to him: “what fun it is that Avner is at your side.” Avner is Netanyahu’s younger son.

Far-Left icon Aviv fashionably favored what would weaken Israel. Thus this Dayan-clan scion asked: “what if Avner, not Gilad, were the bargaining chip?” Geffen avoided mentioning quite whose “bargaining chip” Gilad is, as if Netanyahu were the one who held Gilad captive.

“It’s owed us to sit some hot afternoon, see Gilad return and shed the heavy tear stuck in our eye… There’s no price for one living soul, for one worrying mother,” draft-dodger Aviv dramatically declared.

To be sure, Geffen wasn’t the only showbiz hotshot out to score publicity points. Shlomo Artzi’s pride-and-joy, Ben, also pursues a musical career and makes no bones about having skipped that formative Israeli rite of passage – the IDF stint. In June 2010 Ben participated in a cross-country mega-march organized by the Schalits and performed in that top-draw hyper-hyped 12-day happening. Like Geffen, he too dabbled in self-expression via op-eds. In a Yediot Aharonot piece, Artzi Jr. asserted that the Schalits “appeal to that place in our hearts where there’s no debate about cost and effect.”

Bottom line, we should numb our minds and clamor for submission in the name of melodramatic mawkishness.

But our singing sensations only vocalized the lyrics dictated by the opinion-molding elite. They were merely the handy playthings of cynical and powerful manipulators. Yediot, for instance, drummed up support for the Schalits’ spectacle, appealing in banner page-one headlines to compassionate (if unthinking) Israelis to join the march for Gilad.

*Other news outlets too abandoned the business of reporting the news and switched to manufacturing them.Yediot, though, outdid all the others. It even boldly featured a hand-written logo – “help me” – seemingly scrawled by Gilad. And the masses succumbed to the ploys. Big time!

But then Yediot’s front page began to spin the reverse sentiment. Who’s to blame for Mizrahi’s slaying? Bibi, of course! How do we know it? Because the headlines of the mass-circulation Bibi-bashing tabloid say so.

Yediot‘s revised narrative depicted the Schalit’s swap as “a disastrous decision.” Its omniscient analysts informed their presumably amnesiac readers that “Netanyahu didn’t withstand the pressure of public opinion… despite warnings that letting loose over a thousand terrorists would promote more abductions… a PM without red lines will find himself squeezed over and over.”

Get it? The pernicious pattern was patented by Netanyahu and he’s therefore to blame for Mizrahi’s murder and for the tragic fate of the three nabbed schoolboys – just like he was to blame for Schalit’s prolonged ordeal.

Heaven forefend that the choreographers of the free-Schalit-at-any-price pageants beat their own breasts, never mind actually apologize.

Heaven forefend that they acknowledge who first lost his nerve in a hostage showdown. That was none other than Yitzhak Rabin, when he served as defense minister years before he won the Nobel Peace Prize for inflicting Oslo upon us. Back in antediluvian 1985, Rabin agreed to let out 1,150 convicted terrorists – including some of the then-worst mass-murderers in Israel’s prisons (like Kozo Okamoto, perpetrator of 1972’s infamous airport massacre). In return, Israel was to get three soldiers abducted and held by terror linchpin Ahmed Jibril.

Until then Israelis expected their governments to courageously choose between future detriment and immediate sacrifice. It was never a painless call to make – not when dozens of children were held in Ma’alot’s schoolhouse, not when entire families were cornered in their homes, not when guests were trapped in Tel Aviv’s Savoy Hotel, not when Sabena passengers were hijacked or other air-travelers were taken to Entebbe (where Netanyahu’s own brother fell), not when Olympic athletes were attacked in Munich or when a bus-load of holiday-makers was commandeered on the Coastal Highway.

Israeli leaders and the general public were steadfast in their resolve to resist facile solutions. At the time, even the international community – which already then lost no opportunity to demonize Israel – grudgingly admired Israeli pluck.

We were unique in an otherwise backbone-deficient world until Yitzhak Rabin encountered Miriam Groff of Holon. She was mother to Private Yoskeh, captured in September 1982.

Miriam made Rabin’s life a misery. She hounded him, organized demonstrations, confrontations and provocations – anything. Finally the national unity government under Shimon Peres contracted the ignominious transaction that liberated Yoskeh in May 1985, but flung open the floodgates to a torrent that still engulfs us.

Groff legitimized failure of nerve and increased enemy leverage by helping it to emotionally sway softhearted Jews, who – unlike Arabs – traditionally value saving lives above all else.

In their book Intifada, Ehud Ya’ari and the late Ze’ev Schiff determined that “over a third of all freed Jibril-deal convicts renewed terrorist activity within a year. The rest joined shortly after the First Intifada’s eruption… In time Jibril bragged, justly, that his deal sowed the intifada’s seeds.”

Notorious Hamas progenitor Ahmed Yassin was first released under the Jibril deal. Yassin had “no blood on his hands” then, but before his 1989 re-arrest he founded Hamas and commissioned the abduction/murder of two Israeli soldiers (who unlike Yoskeh were expendable).

All too many Israelis failed to survive other ensuing gratuitous terrorist releases. Miriam secured Yoskeh’s freedom at a cost too awful to tally.

Though distasteful, the undeniable truth is that distraught parents can become potent weapons in the abductors’ psychological warfare arsenal. Groff came across as grotesquely shrill, yet the dovish media avidly abetted her, just as it cheered the Schalits – who were ostensibly more decorous, though not really so. Perhaps diminished societal taboos tampered with our perceptions.

The Schalits’ Miriam-Groff-follow-up act indeed unleashed a calamity of Jibril-fiasco proportions, boosted the temptation to snatch hostages, reduced Israeli justice to utter mockery and taught terrorists that they can butcher Jews with impunity. Any of us might become their future victims.

Ilan Sa’adon and Avi Sasportas (slain on Yassin’s instructions) also had devoted parents. Asher Zaguri, Ron Lavi, Moshe Peled, Matan Biderman, Rotem Shani and Ala Kabishi, whose blood stained al-Amarin’s hands, had adoring mothers and fathers. They too served their nation in uniform. Almost no one today remembers their names and the hypocrisy-mongers playing us for suckers certainly won’t jog dormant memories.

That leaves the widowed Hadas Mizrahi’s insight as the only operative option: “impose the death penalty and make sure there won’t be any more deals like these.” In other words, enemies have to be defeated rather than indulged.

12 thoughts on “Another Tack: Hypocrisy Most Foul”