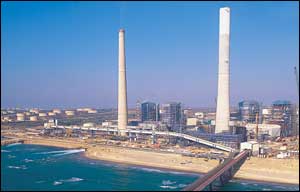 It was almost poetic justice – a rocket which Hamas fired at Israel Sunday night knocked out a high-voltage line that supplies electricity to some 70,000 Gazans. This was a blackout waiting to happen. Literally biting the hand that feeds it, Hamas persistently aims at the very Ashkelon power plant upon which Gaza depends for its electricity. Israel has refrained from switching the power off lest it incur censure from abroad.

Neither Gaza nor the Ramallah half of the Palestinian Authority pays for the power consumed. Gaza alone, it’s estimated, owes the Israel Electric Corporation NIS 220m (out of the staggering NIS1.5bil unpaid Palestinian debts).

The downed electricity line is one of a dozen high-tension lines with 120 megawatts per hour transmission capacity. Its loss means that the entire area between Khan Younis and Deir el-Balah has been plunged into darkness.

The damage is reparable but there’s no quick fix. In the best of times this job could take a long time. As things stand, with more rockets flying out of Gaza, no IEC employees would be willing to risk life and limb and expose themselves to Gazan predations just in order to restore electricity to Gazans. Moreover, no one asks them to.

The IEC states that attempts to mend the severed line wouldn’t be made before full calm is restored and workers could assume they were operating in uncompromised safety. This has received unstinting government backing. Indeed, it’s reported that Prime Minister Binyamin Netanyahu and National Infrastructure, Energy and Water Minister Silvan Shalom had both personally instructed IEC chairman Yiftah Ron-Tal to abstain from endangering the lives of IEC personnel for the Gazans’ sake.

Israel’s electricity supplies to Gaza are part of a larger anomaly.

Despite the 2005 Disengagement, Israel hasn’t been able to fully disengage from Gaza. And thus while Hamas lobs rockets indiscriminately at Israeli civilians in nearly every corner of the country, Israel continues to supply the Strip not only with electricity but also water, foodstuffs, medications and more. This continues during spates of fighting because Israel seeks to deflect PR damage and legal travails.

The IEC has gone so far as to petition the High Court of Justice last month to either allow it to disobey government directives to continue supplying electricity to Gaza or to order the government to deduct the sums owed the IEC from tax money collected by Israel for the PA.

The alternative would be to pass on the costs to ordinary Israelis who are already lumbered down with inordinately high bills. The upshot would be that Israeli households would end up paying for the electricity which Gazans inter alia use to manufacture the rockets with which they threaten the lives of the very same Israelis who pick up their tab. The current is likewise used to dig and maintain tunnels through which much of Hamas’s deadly arsenal is smuggled and through which incursions against Israelis are also plotted.

Surely the disingenuous humanist outcry anticipated in case of a power cut from the Israeli side cannot arise when Gazans cause their own comeuppance. It would be too much even for skewed foreign opinion molders and political pontificators to expect Israeli technicians to put their lives on the line for the sake of their would-be killers.  It shouldn’t be too much to presume that there’s a limit to how unreasonable the international community can be.

But the just deserts which Hamas rocket launchers brought on their own people should also light the way for future Israeli policy.

If Israel is loath to outright pull the plug on Gazan electricity supplies from Israel, it can at least a priori publish a price list for Gazan infractions of whatever future accommodation is reached. Whenever any projectile is fired from Gaza after the truce, it should automatically mean a blackout for given periods, depending on the severity of the aggression. Thus both Gaza and world opinion would be apprised in advance of the consequences of any attacks from Gaza. Those who wish to keep Gaza supplied, should encourage it to cease fire.

14 thoughts on “Blackout Waiting to Happen”