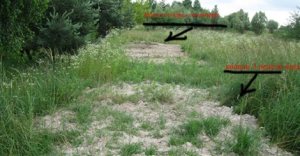 The site of mass Holocaust-era Jewish graves in Volodymyr-Volynsky

News that the mass grave of thousands of slain Jewish men, women and children was ransacked by Ukrainians in their lust after fabled riches, cannot but churn the stomachs of even those most inured to evidence of enduring Judeophobia. In one of his most memorable rebukes (2Kings 21, 19), the Prophet Elijah asked: “Have you murdered and also usurped?” Seven decades after the Holocaust this question is still painfully applicable to all too many in Europe, especially to the Nazis’ most avid collaborators.

These proliferated appallingly in areas with Ukrainian inhabitants. So it was in the vicinity of the then-Polish city of Lvov (which started out as the Austrian Lemberg and is now Lviv in Western Ukraine). Ukrainian accomplices there did much of the Nazis’ dirty work with undisguised relish.

Apparently, the evil spirits of those dark years haven’t yet abated.

Historically, Ukrainian anti-Semitism is legend for its crudity, ferocity and innateness. Ukrainians’ reputation for ongoing racism and ever-virulent intolerance is equally well-earned. Jew-revulsion never quite went out of fashion among broad segments of Ukraine’s population.

The latest grave-looting incident occurred on June 20 in Volodymyr-Volynsky, just north of the once heavily Jewish Lvov. No less than 18,000 Jews were shot in 1941 into open trenches at that location. Their neighbors, eagerly lending credence to any anti-Jewish slander, perpetuated the myth of Jewish lucre buried with Jewish corpses. This still fuels greed and Ukrainians keep digging for spoils among the frail skeletal remains, looking for gold teeth or for whatever jewels the doomed Jews may have supposedly hidden on their persons.

Volodymyr-Volynsky’s macabre treasure-hunt isn’t a one-off. It was already reported in 2010 and in 2011 and now again. Odds are that this also isn’t the only location for such ghastliness.

What aggravates the outrage, though, is the fact that when such predations are reported to the authorities, they consistently refuse to do anything about them, not even to put up memorial plaques or markers of any sort. The boundaries of the mass-graves still aren’t minimally delineated or fenced. This was true before the current conflict and continues under the new government.

Moreover, the areas of greatest ghoulishness aren’t in the east, which is plagued by clashes with pro-Russian forces, but in the west in what was once the very Jewish province of Galicia.

But not only there. Although in Ukraine’s west anti-Semitic manifestations are markedly less restrained, anti-Semitism is also endemic in the heart of the country. And everywhere, outpourings of abuse on the fringes of Ukrainian society are matched only by establishment’s antipathy. Unforgettable is the Kiev Municipality’s 2009 plan to erect a hotel precisely where the Babi Yar memorial is located.  Nearly 34,000 Jews were machine-gunned there by the Nazis in 48 hours on Sept.29 and 30, 1941. Yevgeny Yevtushenko’s 1961 epic poem shamed the Soviets into erecting a monument at the site.

Kiev’s blueprint for that monument’s removal was only scrapped after loud protests which official Ukraine originally greeted with unabashed resentment. Yet the very fact that the desecration could have at all been considered – indeed obstinately insisted upon – signifies disdain.

There can be no excuse for such official callousness, not even at this time of turbulence for Ukraine. Indeed, if Ukrainians wish to impress the watching world with their credentials as members of civilized society, they ought to make the very negligible token gestures of safeguarding the final resting place of many thousands of tortured and executed Jews and they should forthwith bring to trial the morbid raiders who make even grave-robbery and body-snatching pale in comparison to their gruesome quest for imaginary wealth. This is something which Ukrainian patriots should be deeply ashamed of and not turn a blind eye to.

The anti-Semitism which was initially unfashionable in postwar Western Europe is burgeoning again in the shape of anti-Zionism, whereas in Ukraine it’s vulgar and in-your-face – as it was before the Soviets temporarily compressed the genie in their bottle.

Such phenomena should have been unthinkable subsequent to the Holocaust and today’s Europe should regard them as a badge of dishonor.

7 thoughts on “Badge of dishonor”