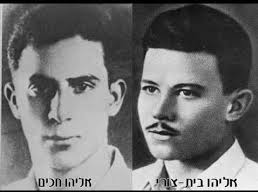 Eliyahu Hakim(l) and Eliyahu Beit-Zuri(r): “We are the accusers at this trial.”

What has become known as Kerry’s “poof” speech is precisely what Israel was afraid of – being blamed for the predictable flop of Kerry’s delusional project.

Kerry can postfactum posture self-righteously and smugly deny having blamed Israel but that’s precisely what he did when he enumerated Israel’s supposed sins one by one. He then dramatically paused for a studied special effect – replete with expressive hand gestures – before resorting to really sophisticated phrasing: “Poof, that was sort of the moment.” The suggested cause and effect was unquestionable. No belated pedantic quibbles can erase Kerry’s intentional, even vindictive, anti-Israel smear.

If anything, Kerry’s cynical performance before the Senate Foreign Relations Committee underscores all the reasons for Israel not to make concessions just in order to make a good impression.

So-called honest brokers, like Kerry, and the so-called objective opinions of the international community, are in any case predisposed against the Jewish state. Therefore there’s no point in sacrificing vital interests to please those who won’t be pleased by any Israeli gesture short of signing articles of surrender.

Israel freed dozens of mass-murders just to avoid Kerry’s finger-pointing. A fat lot of good that did us. After the futility of his peace initiative was embarrassingly palpable, Kerry vented all his frustration on Israel. Israel couldn’t let loose a fourth batch of convicts to facilitate a failed process. Yet the minute Israel would no longer perpetuate the pretense, Kerry did what Israel feared.

We fear being hauled before international tribunals and forums which presume arrogantly to pass justice upon us. We fear their indisputably built-in prejudice. Yet since we cannot avoid being put in the dock, we might as well turn the tables on our false accusers. We can accuse them right back. We might not win but neither will we lose.

Extreme daring is sometimes exonerated by history. When we view the world through our insular prism, we can easily lose perspective. Things often are swiftly magnified to grotesque proportions. Our frantically exaggerated trepidation of world censure sends us into a panic of self-reproach.

Most often our self-inflicted alarm is unwarranted. Occasionally exploits, sure to get Israel into hot-water internationally, may nevertheless be the right thing to do. Losing our collective head isn’t only unnecessary, it’s downright harmful.

This was true even before our state was born, before we could be painted as an ogre imperialist goliath, when we were history’s most helpless underdogs. The world hardly empathized with us then either.

The great-great grandson of Arthur Guinness, Ireland’s beer-brewing mogul, Lord Moyne served as Britain’s Minister Resident in the Middle East. To resort to extreme understatement, he was no friend of the Jewish people. He once famously suggested in the House of Lords that the Arabs deserve hegemony as their race was “purer” than the “mixed” Jewish race.

Nevertheless, while the Holocaust was still ongoing, world opinion managed to expend more outrage on the Two Eliyahus – as they came to be known – than it did on their inherently anti-Semitic victim’s appalling record.

The Jewish national cause was even then weighed on skewed scales.  Not only was there no understanding abroad when our distress couldn’t be more acute but homegrown critics also foamed at the mouth.

The Labor-led Zionist establishment in pre-state Israel lost no time or vehemence to denounce the assassination and launch what came to be dubbed the saison (the “hunting season” in which LHI and IZL members were pursued and turned over to the British). On November 20, 1944 David Ben-Gurion addressed the Histadrut convention and ordered the expulsion of “all Revisionists from all work places – be they in an office, factory or grove… the same goes for students in higher or secondary education, or any other school.”

Yet, incredible as it sounds – given today’s strident anti-Israel incitement of the Arab world’s regimes and their mouthpiece media – the Eliyahus actually evoked widespread sympathy among Egyptians. Students demonstrated for them in the streets and rallied against sentencing them to death. Prominent Egyptian lawyers volunteered to represent them, adhered to the political defense line decreed by the Eliyahus and avidly espoused their nationalist Jewish sentiments.

Hakim set the tone: “we are the accusers at this trial. We accuse Lord Moyne and the government he represented of murdering hundreds of thousands of our brethren and usurping our homeland…Where is the law that would hold them answerable for their crimes? Though absent from the books, it is engraved in our hearts. Hence we had no alternative but to take justice into our own hands.”

Like him, Beit-Zuri told the court: “Thousands of my people drowned in a sea of blood and tears. Nevertheless the British captain denied them haven. He stood on his deck and watched with equanimity how my people drown. And if, despite all, some managed to reach the boat and hang on to its sides, he – the British skipper – shoved them back down to make sure they sink into the abyss… For us, resident in our homeland, who witness all this, only one choice exists –surrender or fight. We choose to fight.”

Lord Moyne’s hands were indeed literally and indelibly stained with Jewish blood – lots of it.

He was personally responsible for inducing the Turks to tug the unseaworthy makeshift immigrant ship Struma – a pitiful rusty sardine-can of an antiquated Danube river barge – from Istanbul Harbor on February 24, 1942. He thereby condemned nearly 800 Jewish refugees onboard (including 103 children and babies) to a certain death. The disabled Struma was left paralyzed, without a motor, provisions or a drop of fuel, to drift precariously on the Black Sea. The Soviet torpedo that later struck it inadvertently was nothing but a coup de grace.

But there was more. On May 15, 1944 Budapest Jew Joel Brand was dispatched to Turkey by Adolf Eichmann (probably at Himmler’s behest) to propose exchanging a million Hungarian Jews for 10,000 trucks. It may well have been a cruel subterfuge, but the British treated the unfortunate Brand unconscionably. He was deceived, arrested and taken to Cairo where he was imprisoned for four-and-a-half months.

In his 1958 autobiography Advocate for the Dead, Brand described being interrogated by a British official, who he later learned was Lord Moyne himself. When told that the lives of as many as a million Jews may be at stake, Moyne retorted: “’What shall I do with those million Jews?’”

“I couldn’t bear to listen to him any further,” Brand recounts (p.155 of the Hebrew edition). “I got up. If there’s no place for us on this earth, then Jews are forced into the gas chambers.” At the 1961 Eichmann trial Brand repeated, under oath, his contention that the above dastardly remark was uttered by no other than Lord Moyne.

With the British pulling vassal Egypt’s strings and agitating for capital punishment, the Eliyahus stood no chance. They were sentenced to die by hanging. Hakim mounted the gallows first on March 22, 1945, singing Hatikva to his last breath. Beit-Zuri did the same half-an-hour later, also singing the Jewish national anthem to his last breath.

But despite the political purge, triggered by the assassination, the Eliyahus didn’t remain vilified villains. Mainstream consensus is ever-mutable. The imperiously imposed axioms of the powers-that-be were eventually set aside.

Already in 1962, no other than Ben-Gurion wrote LHI veteran Geula Cohen: “I bow down my head in awe and esteem for the heroic deaths of the two Eliyahus in Cairo.”

Then came the post-Yom Kippur War negotiations with Egypt, when Labor-led Israel officially requested the two Eliyahus’ remains. On June 26, 1975 they were accorded a state funeral in Jerusalem. On hand were Prime Minister Yitzhak Rabin, Foreign Minister Yigal Allon and other Labor stalwarts, some of them, like Rabin (as distinct from Allon), keen saison collaborators.

Over three decades after the executions, the British government seethed with fury. The Foreign Office, via British ambassador Sir Bernhard Ledwidge, shrilly protested “that an act of terrorism should be honored this way.” The Rabin government rebuffed the petulant complaints. However, it stopped short of arguing that instead of demanding censure and collective contrition from Israelis for the assassination, London might express contrition for its policy of denying asylum to those who desperately tried to flee Hitler’s hell.

After all, 1975 wasn’t a good year. We weren’t popular then, as we aren’t now. Israel was indeed close to its current pariah status. It was shortly before the UN (ironically then-headed by Nazi Kurt Waldheim) equated Zionism to racism (on November 10, 1975). Jerusalem didn’t relish incurring more wrath.

The UN, EU, Kerry and  his boss Barack Obama all dislike us (to put it mildly) but, as the two Eliyahus’ epilogue illustrates, ill-winds blow over if we keep calm and don’t forget the fundamental justice of our cause.  No need for us to lose our head because we fear inclement conditions.

Not only are the fearful not respected, but they impart the impression of guilt. Our inclination to give in a little ground to buy time and goodwill only serves to magnify the inimical perception that we’re in the wrong and that those who would annihilate us are insurgents against injustice.

With each concession we appear to admit wrongdoing. We paint ourselves as villains who expediently promise to commit a little less villainy. It’s one thing when a hypocritical world defames us, it’s quite another when even we look like we’re buying into that defamation.

Therefore, it’s high time to borrow Hakim’s words and hurl them back at Kerry’s “poof” affectation. With Hakim’s passion, we should exclaim as he did: “we are the accusers.”

5 thoughts on “Another Tack: We are the accusers”