Jabotinsky in Acre Prison, 1920: Perfidious Albion knew whom to blame

Something strikingly dramatic happened in this country exactly on this date 94 years ago. Cries of Itbach el-Yahud(slaughter the Jews) filled the air. It was the first coordinated mass-murder offensive launched by infamous Jerusalem Mufti Haj-Amin el-Husseini (who would in time become an avid Nazi collaborator, Hitler’s personal guest in Berlin during WWII and a wanted war-criminal).

Ever since, this land shook fitfully as rounds of massacres and wars followed each other in breathless succession. The past mustn’t be consigned to irrelevance. Unbroken historical continuities contextualize current events. Nothing springs forth from a vacuum. What now transpires began back then.

The pivotal murder-drive of 1920 and its aftermath are vital for understanding why John Kerry’s peace pageant is a flop and why Israel so profoundly displeases him, his boss Barack Obama and their pet-Palestinian Mahmoud Abbas. It established the prototype whereby Jews are punished for Arab crimes against Jews. It highlights the pattern of appeasing Arab wrath and of Jews paying – as if Jewish existence is in and of itself a casus belli.

The bias maddeningly came into play already in 1920. It’s the bias that has today burgeoned into the escalating extortion and shameless expectation that Israel release convicted murderers as a matter of course  and injure its own interests to keep its enemies sweet. It’s as if Israel has no valid interests, no rights. This is the postulate of illegitimacy.

Western antipathy to Jewish self-preservation was already gallingly evident in 1920, as was indulgent acquiescence to Arab aggression. It’s scary to realize how little has actually changed.

Those deadly landmark rampages were kick started on April 4, 1920, exploiting Muslim celebrations to rally thousands of raiders at Nebi Musa in the Judean Desert. Serially inflamed by Husseini’s vitriolic harangues, they poured into Jerusalem, descended upon the Old City’s Jewish Quarter and began butchering, raping, pillaging and burning – all in the name of their God.

The premeditated atrocity lasted four days. Even passing reflections on its overlooked anniversary (it’s so uncool to recall crimes against Jews), can contribute considerably to our present-day perspectives.

This unprovoked killing-spree was launched before any of the excuses for Arab bloodlust – now so conveniently and commonly cited – had existed. There was no Jewish state to fulminate against and no Israeli occupation with which to justify any outrage against Jews in the Jewish homeland.

There was no hint of what the Palestinians market so effectively as their nakba – catastrophe. There wasn’t a single Arab refugee. There was no war, no displacement, no reason to rage. 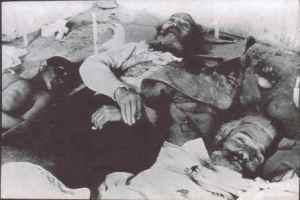 The 1920 victims were largely members of the old-time, traditional, pre-Zionist Jewish community that had long before then constituted Jerusalem’s outright majority. Yet this ancient community was deemed fair game. The subtext was that Jews have no rights – not even indigenous non-Zionists.

Considering  their penchant for distorting history, Israel’s detractors are doubtless tempted to describe 1920’s predators as oppressed Palestinian peasants protesting against usurper Jews. It must, therefore, be a whopping downer to discover that none of this homicidal fury was unleashed on behalf of Palestine. The Arabs loathed the very name introduced to this country by its new British overlords.

Ironically, it was the Jews who became known throughout the first half of the 20th century as Palestinians and it was the Arabs who scornfully rejected the moniker.

The executioners who swooped down on Jerusalem’s Jewish Quarter championed the cause of Greater Syria. On March 7, 1920 Britain crowned Feisal, a Hashemite princeling from today’s Saudi Arabia, as king in Damascus. By July that year the French would chuck him out. In response, London earmarked its latest invention, Iraq, for Feisal’s next monarchy. So much for the fictitious nature of Arab nationalities.

Feisal, incidentally, conferred with Dr. Chaim Weizmann, president of the World Zionist Organization, on January 1919 and they produced the Faisal-Weizmann Agreement for Arab-Jewish Cooperation. Thereupon Faisal issued the following statement, which appears quite fantastic in view of all that ensued:

“We Arabs… look with the deepest sympathy on the Zionist movement… We will wish the Jews a most hearty welcome home… I look forward, and my people with me look forward, to a future in which we will help you and you will help us, so that the countries in which we are mutually interested may once again take their places in the community of the civilized peoples of the world.”

Nothing even minimally approaching such recognition can be expected nowadays of Abbas, who preposterously claims no less than 9000 years of “Palestinian” Arab history in this land and who denies any Jewish connection to it whatsoever.

But truth be told, Faisal failed miserably to enlist support for his pro-Jewish inclinations. Syria’s loyal enthusiasts right here were busy murdering Jews during Feisal’s brief reign as their king. They yearned to be ruled by Damascus – as Syrians, not Palestinians. It would serve to note that Husseini’s co-instigator of the Nebi Musa bloodbath was Aref Aref, significantly editor of the “Southern Syria” newspaper.

Most instructive in regard to Israel’s current international standing is the reaction in 1920 of the international community’s representative – Britain, claimant to the mandate to rule this land. How did it respond to the Jerusalem pogrom?

Not unsurprisingly, as if by a magic wave of the mufti’s wand, His Majesty’s military units actually exited Jerusalem during the onslaught. Top officers, like Allenby’s chief of staff, Col. Bertie Walters-Taylor trained and abetted the assailants. Inspired by him, British and Arab policemen even joined the rioters.

No wonder the mob howled deliriously: “A-Dawla ma’ana” – the government is with us. They knew whereof they screamed and their assessment of the government’s bias was spot on.

How little things have changed. The entire watching world still seethes with bias against this land’s Jews.

The double-standards and double-dealings of foreign onlookers, self-appointed judges and purported peacekeepers carry consequences. Foremost, they delegitimize Jewish self-defense. So it was and so it is.

Given British duplicity, what were the Jews to do back in 1920? Become accomplices to their own demise? Ze’ev Jabotinsky had begun organizing a rudimentary self-defense force, the Hagana. With too few fighters and too few weapons, it could barely contain the marauders.

But Perfidious Albion, standing for the family of nations, knew whom to blame and whom to go after. The Brits didn’t dare confront Husseini. They arrested Jabotinsky and 18 other Hagana members. They sentenced Jabotinsky to 15 years hard labor, which was later commuted to permanent exile. Jabotinsky was never again allowed to enter this country.

Why? Because Jewish self-defense was defamed as utter effrontery. Jews had no right to save their own lives.

It’s no different today when the rest of the world doesn’t hold Abbas accountable for impeding peace, for glorifying the murderers of Jewish children and for seeking to set these murderers loose.  It’s on the same moral plane as not holding Husseini accountable for blatantly and boastfully exhorting his adherents to slay Jews.

The underlying premise – both in 1920 and in 2014 – is that Jews may not defend themselves. It was clear-cut nearly a century ago. It’s disingenuously disguised now.

Overseas, the de rigueur affectation is that Abbas aspires to liberate prisoners of conscience, persecuted altruists and vindictively incarcerated philosophers. Abbas is, after all, feted as the prince of moderation and nothing must challenge this conventional wisdom, even if Abbas routinely makes mass-murderers his objects of reverence.

Abbas cunningly postures as Israel’s guiltless casualty, as a saint on the side of the angels, indeed as the suppresser of terrorism rather than its devious promoter. He seeks to do the right thing – which he would sincerely do, were it not for those obstructionist Israelis.

In the enlightened vanguard of the global good-guy brigade, Abbas convinces willingly gullible saps of what they’re anyway predisposed to imbibe. The watching world voluntarily laps up his fabrications and hypes the deception.

If it weren’t so, liberals worldwide would ask why ostensibly moderate Abbas insists on springing the worst murderers.  Why are the bloodiest sadists upheld by his official propaganda as heroic role-models for the young generation?

Does this perhaps betray the fact that the Palestinians don’t genuinely desire coexistence but desire an existence without Jews? Are Palestinians telling their own children that the only good Jews are dead Jews?

By avoiding these questions, fellow democracies insult to our democracy and legal system. Our courts – autonomous like few others anywhere – deserve respect. Those whom Abbas wants released aren’t – contrary to impressions imparted by foreign media – “political prisoners,” locked up because of their beliefs and gallant advocacy of freedom.

These murderers were convicted after eminently fair trials with all the breaks of due process. They were granted legal representation replete with rights habitually denied defendants in Arab and Muslim countries, where instant kangaroo-court rulings are the norm.

By blithely disregarding all this, the world disparages Israel’s pedantic and ultra-liberal jurisprudence. All Israelis – especially those on the Left, who miss no pretext to resort to Israel’s famous judicial interventionism – ought to be offended to the core by such insolence. It’s unthinkable that our courts would be relied upon only when it suits an expedient agenda but that their decisions would be dishonored when it’s so dictated by diplomatic exigencies.

Moreover, if even verdicts imposed by our courts on unrepentant genocidal murderers can be set aside, how at all are we to defend ourselves?

Israel’s military might is verboten because it’s, alas, “disproportionate force.” Pinpointed targeting of individual terror-mongers, like Ahmed Yassin, are likewise prohibited by unique rules applied to Israel alone.  Assassination, we’re sanctimoniously reminded, is so not-nice. Finally, when on occasion some individual murderers are captured, tried and put behind bars, self-professed humanitarians decry this too as unsavory.

What’s left? No fighting back, no surgical strikes, no prosecution or imprisonment. Nothing. The bottom line is that anything we do to protect ourselves is illegitimate. This perception, not inadvertently, meshes with Abbas’s contention that a Jewish state is illegitimate.

The inherent illegitimacy of the Jewish state makes Jewish self-defense illegitimate. We may be attacked but we may not react. This is how it was in 1920. This is still how it is.

16 thoughts on “Another Tack: The postulate of illegitimacy”