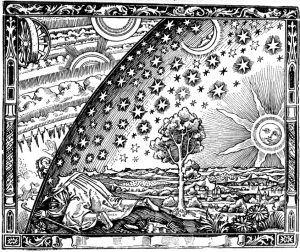 Time was when sensible folks truly believed that if you venture too far, you’ll fall off Earth’s jagged edge into the endless void below. That was the majority view, the widely-accepted and fundamentally unquestioned conventional wisdom.

By today, though, one would assume that nobody swallows that any more, certainly not in the erudite parts of what we’ve for centuries recognized as our globe.

Welcome to the International Flat Earth Society, now largely California-based (where else?). You think IFES-members are crazy? You’d be surprised to learn that they’ve diagnosed the rest of us as profoundly insane for not grasping reality as they know we should.

They reject as counterfeits all compelling scientific data. These, they insist, are elaborate deceptions cynically perpetrated on humanity – for inexplicable purposes – by successive US administrations via their principal charlatan agency, NASA.

Had reason prevailed, Oslo’s perpetrators would be hiding for shame in shuttered rooms. But in our unreasonable milieu they insist on having another go at what failed miserably, keeps exacting a scary price and imperils our very existence.

We might have kidded ourselves that following two full decades of torment and trauma, there’d be no return to obsequious Osloite appeasement. But heck no, like the flat-earth inanity, the land-for-peace chimera somehow survives as if nothing had sown even a teensy seed of doubt in the Israeli public’s collective psyche.

The withdrawal fixation of our agenda-determiners hadn’t dissipated despite their incontrovertible repeat flops since the advent of their Oslo debacle in 1993.

Yes, unbelievably Oslo is officially 20-years-old today and, its obvious putrescence notwithstanding, it carries on and still succeeds to drag browbeaten Israeli society behind it. It’s as if the citizenry’s broad-minded duty is to ignore the unmistakable decay and foulness and obediently go into raptures over the fragrant blossoming of idyllic peace.

Even the mayhem and mob madness of the Arab Spring failed to cool Osloite ardor.

Without compunction, unrepentant Osloites turn us all into proverbial astronauts who see the truth from their satellites but are bound by crass opportunism, political correctness and/or geopolitical expedience to testify that all they behold from out there is a suspended terrestrial disk.

Like the flat-Earthers they deny what is staring us all in the face. Our misnamed peace-partners indeed take little trouble to disguise their aims.

Already in his May 10, 1994 address to Muslims in South Africa, Yasser Arafat proudly crowed that Oslo was a ruse, like the 7th Century Treaty of Hudaybiyyah with the Qureish tribe. The truce it proclaimed was eventually reneged upon. Meanwhile, however, it lulled defiant Jewish communities in the Arabian Peninsula into complacency until the opportunity for attack presented itself and the insubordinate Jews were slaughtered.

But Arafat’s declaration of intent was unwelcome among our Osloites who preferred to pretend that it was never uttered. “Where are those Katyushas?” sardonically teased Oslo’s first sucker, Yitzhak Rabin. Ignoring Arafat, he lashed out at his domestic critics when they then predicted that Oslo will rain terror upon us. Today we know how on-target these predictions were, although even the most prescient of yesteryear’s analysts didn’t envision more than a fraction of what Oslo actually unleashed.

Arafat further elucidated his objectives on January 30, 1996 (well into the Oslo fiasco), when the much-lamented “prince of peace” addressed Arab diplomats in Stockholm. The Nobel Peace laureate judged that the “peace process” must inevitably result in Israel’s downfall.

“We Palestinians will take over everything, including all of Jerusalem,” Arafat exulted. “Peres and Beilin,” he emphasized, “already promised us half of Jerusalem.”

According to Arafat, Israel’s collapse hinged on “PLO efforts to split Israel psychologically into two camps…We plan to eliminate the State of Israel and establish a pure Palestinian State. We’ll make life unbearable for Jews by psychological warfare and a massive influx of Arabs.”

A valiant few nonconformist Israeli politicos dared say so. Over a dozen years ago, Netanyahu declared that “Oslo is dead. The Palestinians quashed the deal they themselves signed.” He set three conditions for restarting talks: “an absolute ceasefire, an unambiguous renunciation of the rampant incitement inculcated into the Palestinian people by its leadership and the testing of these conditions over a prolonged period – not just two-to-three weeks.”

He stressed that “no real co-existence can emerge from a situation in which Palestinians speak war and Israelis speak peace. Only after thorough and unambiguous overhauls of Palestinian intentions and behavior, can we return to a clean negotiating table.”

But did Netanyahu, the reelected prime minister, unceremoniously dispose of Oslo and bury it for good, as per his own advice? Incomprehensibly, Oslo’s sinister specter still flourishes under Netanyahu’s auspices.

After two intifadas, thousands of Israeli dead and wounded, the attendant betrayal and folly of Disengagement, the Hamas takeover of Gaza (which resulted from Disengagement) and an ever-burgeoning series of egregious Israeli concessions (all of which the Palestinians disdainfully rebuffed),  it can be confidently concluded that our geopolitical situation was never this bad.

We mechanically move, as if mesmerized, from debilitating delusion to devastating weakness.

That said, with minimal effort we can recall how much better things were in the summer of 1993, before Oslo was underhandedly unleashed on unsuspecting Israel and allowed to grow exponentially from atrocity to atrocity.

Twenty years ago the first intifada had been quelled. The PLO was down and out, crumbling and deprecated even in the Arab realm. Arafat and 50,000 of his henchmen hadn’t yet been imported here to set up their corrupt latifundia. The Palestinian state was make-believe. “Family reunions” hadn’t yet added 150,000 Arabs to Israel’s population.

Our deterrent was viable. Israel controlled all terror breeding-grounds from South Lebanon to Gaza and all Judea and Samaria nooks. Suicide-bombings and unilateral Israeli retreats weren’t the vogue.

No rational overseas democracy considered a full Israeli withdrawal to the untenable 1949 armistice lines a feasible probability. No foreign government seriously assumed that halting all settlement construction is even a theoretically acceptable proposition for Israel. None presented settlements as the conflict’s underlying root-evil.

Israel’s very right to exist wasn’t challenged in respectable society. Israeli academics weren’t ostracized as they are nowadays. Campuses worldwide weren’t off-limits to pro-Israel opinion. Israel wasn’t lustily demonized in what appear to be pluralist liberal environments. The Jewish state wasn’t the universally reviled pariah. To be sure, it was never the international community’s darling, but nothing approached Israel’s current isolation and delegitimization.

“Disengagement will bring better defense, greater security, significantly more prosperity and much joy to all who live in the Mideast… Together we will move forward in the direction of forging new relationships, improved mutual understanding and enhanced trust. We will sit with our neighbors, talk to them, help them, cooperate with them, become their partners, so that the Middle East will indeed transform into what it was supposed to be to begin with – the Garden of Eden upon this earth.”

Olmert’s sidekick, Tzipi Livni still promotes the same blatantly deceptive vision, even if this time she does so at Netanyahu’s apparent behest.

Late IFES President, Charles Johnson, made it his mission to persuade us that “science is no more than a delusional, fraudulent religion,” which he embarked to “replace with sanity.” He recruited converts and contributors from the world-over, including from such bastions of modernity and enlightenment as Saudi Arabia and Iran.

No less disdainful of empirical fact, Livni spearheads Israel’s establishment elite – cliquey opinion-makers, self-serving trendsetters and bon-ton groupies. Their premise – that Jews must always pay – is as valid as the obstinate assertion that we inhabit an oversized rocky pancake.

But that premise is the root symptom of the Jewish nation’s abnormality and inability to behave like other sovereign nations.  Nowhere is there another country whose citizens ponder daily what more to offer their foes, what they can cede to curry a little favor abroad.

The need to pay for our right to live is uniquely Jewish. We alone bear an onus to justify what’s self-evident and inalienable to any other people. Our obsession to perceive things from our enemies’ point of view is unparalleled.

The origins of Jewish guilt for burdening assailants and the compulsion to make amends are traceable to the penchant of every local medieval tyrant to oblige Jewish communities to pay exorbitantly for the privilege of not being slaughtered. Jews began to treat such levies as the way of the world.

That’s possibly why Israelis can’t conceive of their territory as inviolable as that of other nations – ones whose ancestral tribal thugs or robber barons managed to wrest given land holdings. Nobody doubts ordinary nations’ legitimacy or their continued tenure in their various grabbed real-estate.

The Jewish state’s postulate, however, is that its existence is impermanent and its possessions are currency with which to haggle for reprieve. No other nation pays for its right to exist, buys time or seeks acceptance. No nation would countenance such ignominy.

Even so, while we still smart from Oslo’s repercussions, our land-for-peace fanatics mulishly return to their discredited old habits. As with Flat-Earthers, hard-evidence and reality-checks don’t count.

Samuel Shenton, the original reviver of the Flat Earth cause (he was succeeded posthumously by others), was unfazed even by photographic evidence from outer space. He judged that “it’s easy to see how pictures like these could fool the untrained eye.” For him the earth remained a motionless disk and what appeared like a curvature was “no more than atmospheric refraction.” The moon-landings were… a Hollywood hoax scripted by Arthur C. Clarke.

Of course the difference between him and Livni is that Shenton was a harmless loon, who endangered nobody.