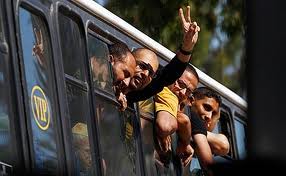 Our memories tend to be so short that all too often déjà vu looks brand new. This is the case with the looming release of 82 convicted terrorists to facilitate the opening of yet another round of negotiations with the Palestinian Authority. But we’ve been there and seen that.

Demanding “gestures of goodwill” and “confidence building measures” from Israel as a price for showing up for talks is a routine Palestinian tactic. It crops up with each attempt to resuscitate contacts and always takes the same shape.

Each time Ramallah portrays convicted terrorists as prisoners of conscience while Israel pays heftily for the privilege of parleying. Paying for the launch of negotiations is presented anew as a necessary evil, an unavoidable realpolitik tax. It seems more prudent to pay up than be stigmatized as intransigent.

The last time this pattern asserted itself was in the autumn of 2007, as the government of Ehud Olmert prepared to buy Palestinian participation at the Annapolis conference that eventually opened on November 27.

As is planned now, the releases then were phased. In August, 255 convicts were let loose, followed by 87 more in October. Most were members of Fatah, the Popular Front and the Democratic Front. About 30 of the total were released to the Gaza Strip.

As in Netanyahu’s current rerun of the scenario, the rationale underlying the 2007 unilateral “gestures of goodwill” was that the release of terrorists to Hamas’s competitor bolsters Mahmoud Abbas and his Fatah faction.

Astoundingly, the same key assumptions are still made – as if no lessons were learned. The first is that it is to Israel’s advantage to bail out Fatah and intervene in intra-Palestinian struggles.

This, despite the fact that Fatah is hardly a friendly force.

Its claim of dedication to peace has been rendered exceedingly dubious by its massive and deadly terrorist onslaughts, particularly those post-Oslo, though its chiefs pro forma endorsed the accords and prodigiously benefited from them.

There is, of course, the school of thought that maintains Fatah ought to be boosted as the lesser of the evils facing Israel. Fatah, it is argued, is preferable to Hamas and may possibly – despite all the betrayals of its solemn undertakings – yet emerge as a trustworthy interlocutor and peace partner.

Not only has this not occurred, but the PA’s unilateral initiatives at the UN belie this premise. Nonetheless, according to this opinion, it behooves Israel to take chances to build up confidence and shore up that Palestinian leader with whom it might perhaps proceed to deal at some juncture, his proven weakness notwithstanding.

Were there a realistic probability of changing minds on the other side, such risks might be quasi-tolerable.

The problem begins with how these risks are perceived by the other side. They are not seen as benevolent concessions by a society with a genuinely independent legal system, which allows its most implacable enemies their day in court, strictly adhering even to the minutiae of due process. Nothing of the sort exists in the PA or indeed in any Arab state. Overruling court verdicts undermines the validity of our judiciary.

The PA never owned up to the fact that these convicts were found guilty and deserved to be sentenced, as they would be in any democratic setting with a sense of self preservation.

What is the value of compromise without acceptance of the fundamental prohibition against attacking civilians? The PA never cracked down on terrorism despite myriad promises. Moreover, its headliners funded, nurtured and dispatched these very murderers. The PA officially celebrates them as heroes instead of condemning them as villains.

The impression deliberately imparted by Palestinian spokesmen is that these prisoners were arbitrarily and unjustly incarcerated.

There is no PA appreciation for these releases. Each Israeli goodwill measure is greeted with ill-will and fiery rhetoric about how insufficient the concession is.

Such ingratitude undercuts the cost-benefit computation.

Whatever Israelis reckon, the grasp of reality in the PA is radically different and far from hope-inspiring. Each release is likely to do little more than erode what remains of already-diminished Israeli deterrence.