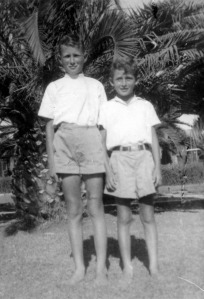 Over the years I have translated to English some of the Hebrew poems I found most evocative and/or meaningful to me personally. Among them are quite a number by Fania Bergstein. Her name most likely means nothing to most Israelis, although so many know her rhymes by heart. They just aren’t aware of who wrote them, who enriched our childhood, whose lines became cherished household staples.

Amazingly, Fania Bergstein faded into undeserved anonymity. But she’s important to understanding our Israeli identity, why we are here, what moves and motivates us.

She died young, at age 42, some 17 years before the Six Day War to which she is tragically connected. There is relevance to remembering her these days when we mark another anniversary of that 1967 showdown, which has increasingly become yet another occasion to besmirch our self-defense, demonize us as land-grabbing imperialist ogres and castigate us for having inconsiderately emerged victorious.

Fania provides context and connections to who we really are. Hers is a quintessentially Israeli story – not only figuratively so. Israeli was her married surname.

I was a toddler when I first encountered her but her name didn’t sink in. Her verses did, however. By my third birthday, I had memorized all the stanzas in her book Bo Elai Parpar Nehmad (come to me pretty butterfly). My mother taught me to recite them with “feeling” and my father caught a butterfly for me, let me hold it for a moment and then release it – as in the title poem: 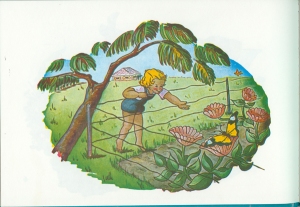 Sit on my hand and stay.

And then you fly away.

Curiously that beautifully illustrated book (by the late Ilse Kantor of Kibbutz Na’an) imparted in me an affinity to some mythic kibbutz childhood that I never experienced. Neither Fania’s nor Ilse’s name even featured on my early-edition book cover, but the thin horizontal volume filled me with images of farmyard chickens, of little black-eared lambs, of newborn calves, of noisy tractors, of nighttime in the communal children’s room and, above all, of that iconic big green truck which “travels far from morning till night to deliver eggs and milk to Tnuva.”

The ditties Fania wrote for the tots in her own Kibbutz Gvat inspired a kinship with them in me. I longed to be a kibbutznik – much as my American counterparts identified with Dick and Jane or wanted to be cowboys. 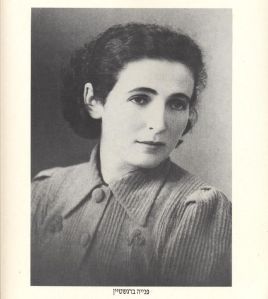 It was only decades later that I translated another Fania Bergstein staple – Nigunim (melodies). Its haunting, very traditionally Jewish music (composed by another matchless Na’an kibbutznik, David Zehavi) was once very familiar in this land – a near classic.

The delicate lyrics, though, are sophisticated in their understatement and hardly mass-market material.

I found the content so overpowering that I thought it best not to try to emulate Fania’s rhymes or cadences. Instead I opted to focus on what she says:

You planted melodies in me, my mother and my father,

Now they rise and grow.

Now they sprout offshoots in my blood,

Their roots intertwine in my arteries,

Your melodies my father, your songs my mother,

Awaken and reverberate in my pulse.

Here I listen to my distant lullaby,

Chanted from mother to daughter.

Here will sparkle in tears and laughter

Each sound is hushed and each note is stilled.

It’s within me that your faraway voices teem.

My eyes I’ll close and I am with you

Above the darkness of the abyss.

These lines were penned in 1944, when the magnitude of the Holocaust was already evident and when most of the Jews of Eretz Yisrael realized that they will never again see their loved ones left in the abyss. Like Fania they understood that the sounds they once habitually heard will from now on resonate only in their memory, that all that was homey and recognizable is now relegated to the realm of nostalgia.

Fania could reunite with her parents, “above the darkness of the abyss,” only by shutting her eyes and recalling.

The socialist milieu to which Fania belonged had for decades shunned the Diaspora, charging it with all the ills that warped Jewish existence. The aim was to create a wholly new Jew of the stalwart kibbutznik model, free from the complexes of 2000 years of exile. But Fania’s heartstrings were powerfully tugged by the lost world, by the melodies sown in her soul.

She entertained New-Jew preschoolers who grew up on the farms of the Jezreel Valley, at one with nature and without being chased by European ghosts and gloomy genocidal shadows. At the same time she herself was inexorably drawn to a past that was entirely foreign to them.

It was a dichotomy and a paradox that characterized much of her generation here. She expressed what so many others felt but couldn’t put into words. They forged ahead with daily life, with bringing babies into the world, rearing and defending them, but in most everyone’s background lurked a melancholy undertone – the knowledge that their original families had been devoured by the unfathomable genocidal conflagration ignited in civilized Europe.

Like most everyone around her, Fania was a bridge. She was a living connection between a destroyed world and the new one being created. She articulated both the heartache and the hope.

In that, her story is so typically Israeli.

Fania came into the world in what some may prefer to call Belarus and others Poland.  Then, in 1908, it was part of the Russian Pale of Jewish Settlement. But assorted predations sent the family running away, till it eventually made its home in Poland proper. Fania lost her mother when she was 21. A year later, in 1930 she came to Kibbutz Gvat with her spouse, Aharon Israeli. Her father and brother remained in Poland. In 1934 Fania gave birth to the couple’s only child – Gershon Israeli – a tall, fair-haired, exemplary Sabra. 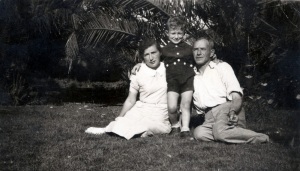 So far, it’s a pattern replicated in numerous homes throughout embryonic Israel. But Fania suffered from a severe congenital cardiac defect, which weakened her, limited her mobility and kept her bedridden for the last five years of her life – including long stretches at Afula Hospital. On September 18, 1950 her heart finally gave out.

Her story, though, didn’t end there and it continued to unfold according to an all-too-common Israeli blueprint.

Fania left behind a strapping remarkably handsome 16-year-old son, who inherited the writing bug from both his parents (Aharon was a prolific author on Jewish sociology and kibbutz dynamics). Gershon also played the mandolin and composed music to many of his mother’s verses.

Nevertheless, a bit of a dichotomy in his own way, he also loved everything mechanical and avidly collected any bits of rusted disused scrap he could get his hands on. It was no surprise that he grew up to become an engineer and was put in charge of Kibbutz Gvat’s plastics factory production line.

As war broke out on June 5, 1967 Gershon, then 33, rushed to volunteer for reserves duty. He didn’t wait for call-up orders. Gershon wasn’t unique. His entire unit was made up of “older soldiers” and all showed up before anyone thought to conscript them. They did patrol tasks and weapons maintenance work at Camp Amos, near Afula, on the second day of the war.

Early that morning– exactly 46 years and one day ago – a big plane appeared briefly above, dogged by two Israeli Mirage fighters. Within seconds, the heavy Soviet-made Tupolev 16 jet bomber crashed into the camp. Nobody knows exactly what happened and in those heady postwar days there was no thorough investigation. The Tupolev might have been hit both by Israeli ground-to-air artillery and by the Mirages.

The resultant explosion set off a raging blaze. Fourteen soldiers were killed outright and two died later from handling the Tupolev’s munitions.

It transpired that this was an Iraqi plane that penetrated Israeli airspace and tried to bombard Netanya. Luckily its bombs didn’t detonate but their impact caused damage in the coastal town and killed one passerby. At Camp Amos there was devastation. Nine bodies were buried in a common grave because it was impossible to tell them apart.

But Gershon’s height as well as the kibbutz laundry number on his socks facilitated identification. Gershon left behind a wife, Pnina, and three daughters – the youngest only ten-months-old.

Today, the entire incident is barely remembered. Hardly anyone knows about an Iraqi attempt to bomb Netanya, like hardly anyone knows that shells fired by a Jordanian Long Tom cannon reached all the way into the heart of Tel Aviv and caused damage to a building in Kikar Masaryk.

The utter existential vulnerability of terrifyingly narrow-waisted Israel in 1967 is hardly discussed or so much as acknowledged any more. But it was why reservists like Gershon Israeli reported for duty at their own initiative.

They were children of parents who were more often than not “bridges,” like Fania. They knew what would happen if they didn’t fight.

Gershon Israeli and his comrades typified the IDF – Israel’s people’s army. They were the diametrical opposite of greedy conquistadors. They were defenders who aimed to preempt a second Holocaust. Anyone who then heard the blusterous Arab propaganda, or saw Arab cartoons illustrating all the sadistic methods to exterminate Jews, knew exactly what bloodbath was planned for Israel.

The fact that in recent years it has become de rigueur not only to rewrite history but also to subscribe to the false revisions as “a valid narrative,” testifies to the shamelessness of the human capacity for hypocrisy.

The only antidote to the Big Lie is remembrance.

Each of us who remembers 1967 is a bridge today, just as Fania was in her day. She wouldn’t part from her seminal recollections and we mustn’t part from ours. Obscure episodes such as the one that took Gershon Israeli’s life mustn’t be consigned to oblivion because – along with his mother’s odyssey and her poignant longings – they constitute an indispensable component of our very Israeli story. 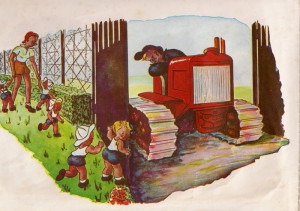 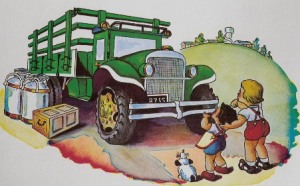 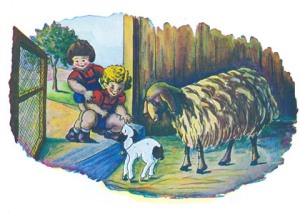 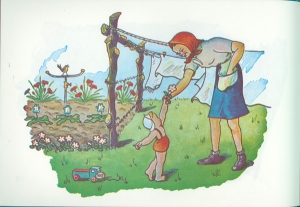 11 thoughts on “Another Tack: A very Israeli story”