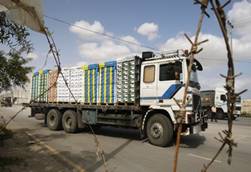 Few are aware that just as the intense rocketing of Israel’s metropolitan areas was ramped up, the Kerem Shalom crossing to the Gaza Strip was reopened early last week. Trucks laden with foodstuffs and supplies were allowed through to those who were lobbing missiles at Israeli civilians.

Undoubtedly, these consignments didn’t only serve noncombatants but were seized by the combatants and allocated as they saw fit.

Now that a cease-fire is in place, this travesty surely should prompt a comprehensive collective rethink among Israelis.

Nowhere else in the history of armed conflict was there ever a situation in which a combatant side looked after its mortal enemy’s welfare, fed it, supplied it with essentials and powered it with electricity.

Invariably, the reverse is true. Combatants besiege enemies, seek to starve them into submission and to disable their ability to fight. That is the norm of warfare – most especially vis-à-vis aggressive antagonists who persistently stoke the furnaces of hostility and relentlessly make civilians their primary targets.

But despite a dozen years of assorted barrages from Gaza – punctuated by particularly severe episodes, as we witnessed only days ago – Israel makes sure that Gazans are well fed and lack nothing vital.

This is counter-intuitive in the extreme. Moreover, the world does not acknowledge our peculiar largesse, one that forcefully grates against our fundamental interests. Despite shipments of basic commodities to Gaza, we are pilloried as imposers of blockades and creators of humanitarian crises –nonexistent though they are – in the Strip.

As trucks laden with goods crossed from Israel into Gaza, the Hamas narrative was only underscored. Although our power plant in Ashkelon facilitates the continued manufacture, import, upkeep and deployment of more missiles, Gazans fired at that very power plant.

Something is wrong with this picture. It has been an acute anomaly for years, but it became all the more insufferable as the entire country from Tel Aviv southward was viciously bombarded, with the undisguised aim being the premeditated mass murder of Israeli noncombatants.

Why should these attacked Israelis continue to aid and abet their implacable enemies? Our supplies to Gaza help wage war against us. Why should Israelis be expected and required to look after their enemies? Would any such demand be put to any other nation under concerted lethal fire?

All this is exacerbated by the Palestinians’ consistent underlying ideology that perceives attacks on Israeli civilians as a God-given right but which denounces Israeli self-defense – no matter how sterile and pinpointed its intention – as illegitimate and a war crime. That is the belief of Gaza’s masses, and that elementary justification of terrorism cannot be rooted out via surgical air strikes.

The population in Gaza needs to understand that there is a price for its complicity in the attacks on its Israeli counterpart. At the very least this ought to mean – even after the cease-fire – that we cannot continue to take care of our enemies’ daily needs.

On the one hand, our air strikes were geared to take out terrorist infrastructure, yet our other hand buttressed that very infrastructure. Official Israel clearly dreaded the backlash of world opinion.

This fear undermines our ability to defeat or even to significantly dent Gaza’s terrorist infrastructure for the long haul.

Without a thorough revamp of mind-sets here, operation Pillar of Defense may well yield tactical short-term benefits, but it will not make a strategic difference further down the line. A multiplicity of cogent rationalizations existed against a ground invasion of Gaza, but there is nothing nearly as compelling against beginning a true and final disengagement from Gaza.

Instead of strengthening those who do their utmost to destroy us, it is high time we quit being suckers. It is also time to disconnect Gazans from our power grid, telephone and communication services (for which, inter alia, they never pay). Maintaining the absurd status quo heaps folly upon folly.