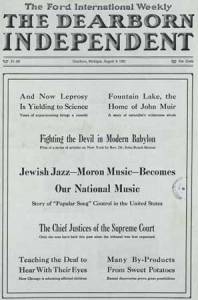 Dearborn, Michigan, may have started off as a no-account aggregate of farms and modest homesteads but it would evolve into a singular omen. This once-quintessential emblem of old-time Americana would stand out as a powerful indication of important things to come. Dearborn encapsulates within itself something akin to an ever-unfolding prophesy of America’s future.

It’s perhaps no quirk of fate that the latest episode in Dearborn’s annals is about protecting the honor of a prophet via anti-blasphemy laws – the draconian sort which proliferate in Saudi Arabia, Pakistan and other centers of Islamic enlightenment. It’s all along the lines of the international ban on anti-Islam speech proposed at the UN General Assembly by Egyptian President Mohamed Morsi of the Muslim Brotherhood and darling of America’s own elected leader, Barack Obama.

This is hardly insignificant because the impetus for the outcry about the supposed insult to Muhammad’s repute was given by no other than Obama himself.

It was he and his administration’s mouthpieces who assiduously disseminated the insult-narrative as the pretext for Muslim violence worldwide. They repeatedly underscored, harshly condemned and profusely apologized for said insult – even if in the same breath they also sanctimoniously preached that rioting isn’t a proper response to what they nevertheless did portray as a genuine grievance.

Obama’s flattery of fanatics constitutes a prime feature of his outreach-to-Islam policy. His premise is that sycophancy from a president boasting the middle name of Hussein should, in and of itself, create an affinity, make Muslims trust him and accept him as a kindred spirit. But what Obama in fact does is appeal with superficial presumption to Muslim xenophobes, elevating their intransigence to undeserved equality with the West’s carte blanche tolerance.

Thereby Obama reinforces in his Muslim listeners the sense that they are actually wronged and deserve redress. At this point his entreaties for calm are lost in the tempest of unforgiving Islamic indignation which he helps stir up.

This perception of righteous resentment, accentuated by their own favorite president, brought Dearborn’s Muslims out for an extraordinary rally to urge that legal prohibitions be legislated against free speech, if that speech is deemed hurtful to “the religious feelings of Muslims.”

The inescapable subtext is a campaign to silence freedom of expression and effectively submit to Islamic censorship whatever is put out in the public domain.

Needless to stress, in the hallowed name of the First Amendment, America tolerated the massive Dearborn anti-First Amendment protest. It also turned a blind eye last June to the stoning of Christian demonstrators in Dearborn, the American city with the largest proportion of Arabs in its population (estimated at between 40 and 50 percent), as well as home to the nation’s largest mosque and Islamic center – and there are numerous other mosques and competing Islamic centers in Dearborn.

It’s a far cry from what Dearborn once was. The township was catapulted to prominence by Henry Ford, who was born and bred nearby (within today’s city limits), would make it his home, headquarter his automobile manufacturing conglomerate there and in it develop his innovative mass production concept, replete – for better and worse – with the conveyor belt and assembly line.

But Dearborn would imprint a heavy mark on humankind not only in terms of modern industry and labor relations. If Ford could posthumously catch a glimpse of this locale today, he’d apoplectically somersault in his grave. He serially conjured up doomsday visions of ogre Jews taking over WASP dominions. Yet in his direst nightmares he couldn’t imagine that Dearborn would become the most Arab of American cities.

Dearborn, of course, cloaks itself with good intentions in the best of American tradition. According to rally-organizer, self-proclaimed “moderate” Osama Siblani, “there’s a need for deterrent legal measures against those individuals or groups that want to damage relations between people, spread hate and incite violence.”

And so under the cover of anti-hate laws, one group would seize for itself exclusive rights to silence any opinion which it would denounce as an affront to its religion, and to it alone. Through the distorting prism of Shari’a law, rights which we consider inalienable might certainly be misrepresented as hate-speech.

But they are not. Non-fawning appraisal of any aspect of Islam isn’t perforce hate.

On the other hand, hate is what’s propagated blusterously by Hamas, which hardly comes under fire in Dearborn. Indeed Hamas is highly popular there and is even actively supported via fund-raising for ostensibly charitable causes. Many in Dearborn don’t dispute Hamas’s claims to possess divine rights to annihilate an entire nation – Israel.

There are no rallies in Dearborn against the blunt assertion in the Hamas Charter’s opening section that “Israel will rise and will remain erect until Islam eliminates it as it had eliminated its predecessors.”

Nor is there any quarrel with the definition of Hamas as a “humane movement,” which merely stipulates that “safety and security can only prevail under the shadow of Islam… Members of other religions must desist from struggling against Islam… for if they were to gain the upper hand, fighting, torture and uprooting would follow.”

There is ample backing in Dearborn for the Hamas historiography which maintains that Jews “stood behind the French and Communist Revolutions and behind most all revolutions…. They also used money to establish clandestine organizations… to destroy societies and carry out Zionist interests. Such organizations are: the Freemasons, Rotary Clubs, Lions Clubs, B’nai B’rith, etc. All of them are destructive spying organizations.”

Anyone familiar with Mein Kampf will discover kindred insinuations about the insidious forces of “International Judaism.” Jews, avers the Hamas Charter, citing the infamous fake Protocols of the Elders of Zion as proof, are the instigators of all strife on this planet: “There was no war that broke out anywhere without their fingerprints on it.”

But this is where the spirit of today’s Dearborn meshes so perfectly with the Dearborn of yesteryear. In his heyday, Ford would have unhesitatingly approved all the aforementioned sentiments.

He, after all, published and circulated the counterfeit Protocols in The Dearborn Independent, a weekly which he owned from 1918 through 1927 and which he used unabashedly as a vehicle for undisguised Judeophobia.

In February 1921, Ford went on the record saying: “The only statement I care to make about the Protocols is that they fit in with what is going on.” The Protocols, he insisted had to be authentic, because he blamed Jewish financiers for fomenting WWI. Conspiracy theorists throughout the Arab/Muslim sphere would avidly subscribe to Ford’s circular reasoning. But there’s more. Ford expounded his hate (as distinct from critical consideration of the Jewish faith) in a weekly column he dictated to his “journalists.”

Called Mr. Ford’s Page, it castigated the Jews for everything – from short skirts and jazz music to sabotaging Ford car sales and instigating international conflicts. Ford even accused president Woodrow Wilson of taking secret orders over the phone from justice Louis Brandeis (corroborating Ford’s allegations because Brandeis was, alas, a Jew).

Anthologies of Ford’s diatribes were published in book form from 1920 on. Several compendiums titled The International Jew: the World’s Foremost Problem eventually saw light. This was no innocuous curio.

The German reprint of Ford’s book had profound influence on one, Adolf Hitler – so much so, that entire sections of this Dearborn original were plagiarized by Hitler and were copied into his Mein Kampf, which resonates with Ford’s own indelible legacy. Much of the Hamas invective appears lifted right from Mein Kampf, which, unsurprisingly, remains the single most outstanding runaway bestseller in the assorted bastions of Islam.

This is where a line should be drawn between legitimate non-adulation of someone else’s prophet and incitement. Only cynical propagandists blur the distinctions between disparaging any creed and targeting a systematically demonized group for hostile physical assault.

There’s a sea of difference here. When Muslims call for the obliteration of infidels in the form of Jews – dehumanized as monkeys and pigs – there are operative consequences to their incitement. When Ford inspired Nazi mass-murder, there were horrific consequences to his incitement. No such consequences accrue from what Muslim inflammatory discourse prefers for its own purposes to exaggerate as heresy.

Anyhow, it is our right as citizens of the Free World to spout heresy all day long, if we so wish – against any religion. No harm should befall us therefrom and no legal sanction should hang over our heads because of it.

This is where it ought to also be noted that Ford at some point seemed to recant, but non-too-convincingly. The fuehrer, at any rate, was unimpressed with Ford’s professed change of heart and in 1938 awarded him the Grand Cross of the German Eagle, the highest medal Nazi Germany could bestow on a foreigner. Hitler kept an outsized photo of Ford in his office.

Ford would later go on promote his ideas through front men like master of hate-radio Father Charles Coughlin. In time, Ford would blame Jewish bankers for the outbreak of WWII as well. Just like Hamas still does.

So we come full circle. Dearborn’s past and present aren’t entirely disconnected.

It’s nothing that anyone should feel smug enough to shrug off. Nothing that comes out of Dearborn should be dismissed as too trifling to trouble us, especially when underpinned by presidential rhetoric.

5 thoughts on “Another Tack: The Dearborn omen”