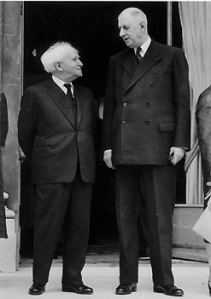 To those among us with some historical memory, these tense days might be reminiscent of days no less tense on the eve of the Six Day War. Then too Israel was beset by existential threat.

Egypt had blockaded the Tiran Straits, kicked out UN forces from Sinai and filled our airwaves with bellicose bluster about annihilating the Jewish state, a.k.a. the loathsome “Zionist entity.” Four and a half decades later, we are threatened by Iranian nukes and all around us is regurgitated the bellicose bluster about annihilating Israel, a.k.a. the loathsome “Zionist entity.” To those of us who still remember, the vehement vows to obliterate us sound eerily similar.

But the comparables hardly end here. Our nervous systems are today mercilessly put through the wringer – but not for the first time. Yesteryear too, our very existence seemed to equally hang in the balance during a protracted waiting period of uncertainly, compounded by the realization that somewhere, behind closed doors, life-and-death decisions are being weighed by pressured individuals tugged in contradictory directions and bearing unenviable burdens. We didn’t know back then, in 1967, about Yitzhak Rabin’s breakdown but plenty of us felt at the end of our own tether.

And as our white-knuckle ride on history’s roller coaster tumbled and tossed us 45 years ago, the world watched with apathetic aplomb. Our grueling anxiety was no skin off assorted foreign noses. It was our misfortune and none of their own. Just as now.

Already back in 1967 what concerned the august statesmen of fellow democracies was hardly our welfare and survival. What they feared most was an Israeli preemptive strike. That, they warned sternly, would grievously upset the international apple cart.

What they counseled was that we just learn to live with the very potent threats to our continued presence on the face of this planet. We should embrace our endangered species status and count on their diplomats to powwow as per polite protocol. Perhaps they can win us a smidgen of extra time, but only on condition that we don’t fly off the handle.

Sound familiar? It should.

What US President Barack Obama fears most, as he campaigns for reelection, is not the Iranian bomb but Israeli action against that bomb – especially if the dreaded Israeli preemption occurs before the race for the White House concludes. That would really be a political killjoy. And so Obama and his diverse mouthpieces – some in uniform – issue severe and unsympathetic admonitions against Israeli adventurism.

They prefer us diminished, demoralized, dependent on their good will, and, most of all, no trouble during a close electoral showdown. While we compliantly cower in our assigned corner, they could lay it on real thick and announce that they’re our devoted friends. Our fate and future must be entrusted to their superior judgment because Obama knows best. He often tells us so.

This bears uncanny resemblance to the attitude of another omniscient friend – French president Charles de Gaulle. Indisputably, Obama appears the more likable of the two but his policy bottom line is just as galling as de Gaulle’s.

Back in 1967 many of us still convinced ourselves, despite mounting evidence to the contrary, that de Gaulle was our best bud. There was no American aid back then but France occupied a warm spot in Israeli hearts. In its earliest days Israel came to regard France as an ally, which it literally was during the 1956 Sinai Campaign, but it also offered military and scientific collaboration (which begot our nuclear reactor in Dimona). France was Israel’s premier weapons retailer. Israel’s first modern fighter jets were the French Mirages.

But by 1967 the disposition toward Israel had shifted as radically in the Élysée as it later transformed in the White House, after Obama took up residence there in 2009. He was already imbued with pro- Arab/pro-Muslim/pro-Third World predilections. Obama sought to impress all these players, which were inter alia inimical to Israel, with his empathy toward them. He stressed at every opportunity (even when appointing a new NASA chief) that he aimed to reach out to Islam. He berated American exceptionalism and apologized for perceived American/Western slights. Since Israel is unequivocally part of the democratic West and is abhorred viscerally by Islamist forces, it was excluded from Obamaesque affections.

Likewise, de Gaulle found no pragmatic use for Israel after the close of the Algerian conflict. He was decidedly more interested in Arab oil than in Jewish valor and preferred to entice Arabs with French weaponry. Israel became a chronic pain in his backside.

This isn’t our conjecture or narrative. We have it directly from de Gaulle’s own mouth. In his infamous November 27, 1967 press conference, de Gaulle did more than characterize all Jews “an elitist people, self-assured and domineering.” He also fulminated on the personal affront which the Six Day War constituted for him.

Like Obama today, de Gaulle then cautioned Israel against launching any offensive. Like Israel today, Israel then did its absolute darndest to alert the nations of the world to the unparalleled peril facing it. Like today, the hope then was to squeeze out some sort of international action that would obviate the need for Israel to go it militarily alone.

De Gaulle noted that Israel sent its top diplomat to him, the suave and very dovish Abba Eban. In his supercilious manner, de Gaulle referred to their meeting: “I myself, on 24 May, had stated to Mr. Eban, Israel’s foreign minister, whom I saw in Paris: ‘If Israel is attacked we shall not let it be destroyed, but if you attack we shall condemn your action.’”

It was pretty much what Obama now tells Israel and every bit as vague – bone-chillingly so. Like Obama today, de Gaulle then gave no hint of any concrete measure with which he planned to prevent Israel’s destruction. All he had done on that same day, in his own words, was to “propose to the other three Major Powers to jointly forbid both parties from initiating the fight.”

These powers, he suggested, should hold an international conference in an attempt to restore tranquility.

Sound familiar? It should.

Obama and his international partners have been in the business of restoring ostensible tranquility for years. It’s no more likely to succeed now than it did then. In both cases Moscow gave succor to the villains of the piece. In 1967 it cosseted its protégés Syria and Egypt and spurned all efforts to keep them at bay, asserting that no crisis existed and that the hysteria was an intrinsic feature of Israeli war-mongering.

Today Moscow cossets Iran and charges that there is no reason to lean hard on the ayatollahs. Subtext: there is no crisis, only Israeli machinations. Russia helps Iran further its nuclear ambitions while dragging its feet on sanctions, if not altogether sabotaging them.

In his own memoirs, Eban recounted the glacial indifference with which he was received by de Gaulle in May 1967, when he rushed to Paris to hold an emergency meeting and emphasize precisely how precarious things were. All he heard from de Gaulle were repeated admonitions against starting a war. Netanyahu’s visits to Obama (especially those considerably before the elections, before make-nice obligations prevailed) match the humiliation and unresponsiveness.

On June 2, 1967, De Gaulle published an official communiqué in which he openly and unabashedly singled Israel out for rebuke and declared he’d terminate all arms deals if Israel doesn’t abandon the military option forthwith.

Obama, it needs be admitted, cannot be as unpleasant and as tactless as de Gaulle. While he adamantly refuses to draw red lines on Iran, he must abide by the rules of etiquette in his American playing field – well almost, leastways during sensitive campaigns. The flipside of this is that Obama can’t be as brutally honest as de Gaulle. Obama pretends a lot. De Gaulle didn’t.

De Gaulle didn’t let Israel down easy, despite the fact that lonely, vulnerable, affection-craving Israel always yearned for friends. It always also liked to kid itself that it has friends. Hence, during his state visit to Paris on June 14, 1960, David Ben-Gurion extolled French friendship for little, renascent, plucky Israel.

Israel’s first prime minister was standing next to De Gaulle, who was his unmitigated snooty self that day. With no compunctions, de Gaulle condescendingly doused BG’s heartfelt sentiments. “In international affairs,” he intoned disdainfully, “there are no friends, only interests.”

De Gaulle’s words may have been harsh but they still ring true and should temper our enthusiasm for Obama’s electioneering blandishments. Obama has his own interests and he wants us as submissive and passive in our hour of peril as de Gaulle did.

It’s not that we have better friends than America. We don’t. In fact, we have no friends. Pseudo-friends can be only comforting and useful occasionally, on condition that we maintain suspicious vigilance and put our own existential interests first.