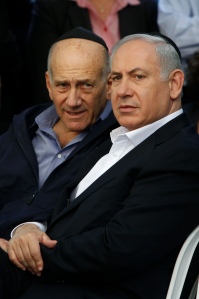 I couldn’t help rubbing my eyes in disbelief at the joyful celebrations which greeted former premier Ehud Olmert’s acquittal in two corruption cases and the simultaneous belittling of his conviction on a third – what his cheerleaders portrayed as the “minor” matter of breach of trust.

I couldn’t help wondering whether the same reactions could have been remotely conceivable had the defendant been named Binyamin Netanyahu.

I vividly recalled when the “breach of trust” innuendo was hurled accusingly at Netanyahu, not after a courtroom verdict but after the prosecution admitted it had no case to at all take to trial. That in no way prevented a raging tempest from ominously swirling around Netanyahu.

In diametrical discrepancy to the Olmert phenomenon, there were no orchestrated (or other) compunctions about attempts to bring down a serving prime minister at the outset of his term. Nobody dared suggest adoption of the French law which shields PMs in office from investigation and prosecution. In fact, keeping Netanyahu from his weighty duties was deemed a laudable objective.

If anything, the prevailing bon ton dictated that it was a darn shame Bibi wasn’t hauled off to court, summarily tried, convicted and ignominiously booted out. To hear trendsetters, that was what he deserved because the prosecutors, who estimated that they didn’t have the goods on him, nevertheless rebuked him for supposed intentions which they admitted they couldn’t prove. That alone sufficed to pillory Netanyahu.

And woe to anyone who dared not toe the line.

During my many years in political journalism, I faced often ruthless, crude and undisguised pressure. It was little wonder. I persistently rubbed against the ideological grain of the then-leftwing Jerusalem Post, inevitably to my own detriment. But nothing was as highhanded and hostile as what I encountered in April 1997, after the prosecution declined to charge Netanyahu (for allegedly appointing Ronnie Bar-On as attorney-general with the understanding that he’d go soft on Arye Deri, who’d in turn support Netanyahu on Hebron).

The Bibi-baiting media spun the spin with unprecedented gusto and embellished its own conjectures with incomparable relish. The rampant innuendo spawned ever-more speculation and unbridled insinuations were presented as an airtight case. Imagine the frustration when, despite all this, the prosecution concluded that there just wasn’t any real evidence to warrant so much as an indictment.

In no time bitter disappointment burgeoned into a vituperative backlash. Anyone who craved a modicum of popularity and three seconds of limelight joined the Bibi-bashing chorus. Meretz leader Yossi Sarid sought to comfort the lamenting Left by solemnly pronouncing Netanyahu’s government dead.

That inspired me to write a Friday opinion piece, arguing that “Sarid may have only given voice to his wishful thinking. He did not check for vital signs.” I stayed deliberately away from value judgment, opting to coolly analyze the balance of power, forces at play and Netanyahu’s survival prospects.

In hindsight, I can now note with satisfaction that I was dead right in my every prediction. But at the time, my forecasts were received with open dismay by my bosses. The upshot was that entire paragraphs were added without my foreknowledge or permission to my copy, under my byline.

And so, as far as my readers were concerned, I had concurred that “a serious and criminal breach of trust had occurred,” even if it didn’t ripen into a charge, never mind a conviction. My failure “to cooperate” and vent about the unproven breach of trust became an indelible blemish on my reputation. How could anyone of minimally upright character refuse to denounce and revile Netanyahu?

The visceral de rigueur animosity against Netanyahu became eerily reminiscent of the organized loathing in George Orwell’s 1984 for Big Brother’s arch-antagonist, who was castigated regularly on the official “telescreen” daily “Two Minutes of Hate” feature, till his very image evoked hisses and reactions of “mingled fear and disgust.”

Considering that Netanyahu – without having ever been tried – couldn’t escape censure and scorn, it’s all the more mind-blowing that Olmert is feted after he was found guilty on one charge and escaped conviction on two others, not because the judges contested the facts but because of their subjective impression about his intent.

Israeli jurists, it needs be stressed, pride themselves on their extrasensory psychic aptitudes.

Thus Margalit Har-Shefi, just 19-yearsold at the time, was arrested after the Rabin assassination in 1995 because she was Yigal Amir’s classmate and friend. The prosecution alleged she knew of his intentions yet failed to phone the police. Eventually she was tried, convicted and imprisoned for the rarely prosecuted offense of “not preventing a crime.”

Throughout, she vehemently denied advance knowledge about the assassination. The majority of judges, apparently having accessed her innermost consciousness, ruled otherwise. It was her word against their opinion. Although there wasn’t a shred of evidence against her, she became a despised public enemy.

Both former Shin Bet chiefs Carmi Gillon and Ami Ayalon would years later own up that she wasn’t guilty. But our opinion-molders couldn’t care less, not even when Ayalon boasted in 2007 that he possessed “intelligence information” clearly establishing that “Har-Shefi didn’t imagine what Amir planned. I know – I was Shin Bet head.” Still, pleas to accord her a retrial were flatly rejected and media hotshots bristled resentfully at the very suggestion that Har-Shefi might be exonerated.

Our judiciary’s presumption to know with preternatural penetrating infallibility what evil lurks (or doesn’t) in the hearts of men is dangerous not only regarding the rights of politically disliked defendants. It’s also dangerous to the well-being of our civic society, our democracy and such notions as equality before the law.

In Olmert’s cases, the judges don’t dispute that money changed hands between American businessman Morris Talansky and Olmert or that he double-billed charities on his air journeys (this isn’t innuendo but boldly asserted in the verdict). However, they didn’t ascribe to him “criminal intent,” even if illicit ties and illicit practices existed.

Here we willy-nilly enter the realm of psychoanalysis rather than legal reasoning.

Hypothetically, we might submit that there needn’t be something inherently felonious in the spectacle of a leading politico accepting envelopes stuffed with cash. At the same time, however, this state of affairs is hardly condonable from the vantage point of civic hygiene. Any bigwig in public life owes us more elevated ethics.

If on the civic plane we acquiesce to paint Olmert as a latter-day Dreyfus, then we foolhardily regress into the bad old days when higher-ups behaved badly while pretending not to see, know or comprehend.

Hence it’s remarkable that the very same people who fumed when Netanyahu wasn’t tried, now fume because Olmert was tried. The very same forces who tried to remove Netanyahu now claim that the scandals that surrounded Olmert unjustly led to his political downfall. They conveniently omit mention of the fact that his approval ratings were down to 2 or 3 percent (depending on the survey quoted).

That was in early 2007, a year and a half before he stepped down under corruption’s darkening clouds. Already in mid- March 2007, prime minister Ehud Olmert, attending a Kadima function in Petah Tikva, intoned dramatically: “I am an unpopular premier.”

At that point he wasn’t yet dogged by legal travails. His chagrin then was aroused by opinion polls, which he depicted as truncheons used to bludgeon him and illegitimately wrest his power away.

To win pity and/or grudging admiration for his tenacity-in-the-face-of-adversity, Olmert posed desperately as the poor persecuted underdog, who despite unparalleled rock-bottom repute, remains steadfastly unintimidated and a committed public servant. He altruistically pledged to ignore the public’s judgment and “continue to serve” said public despite its wishes.

Olmert’s foremost obligation was to not abandon his “workplace,” as he put it. The only trifling detail expediently overlooked is that the voters were his bosses and that his bosses had ceased to appreciate their employee’s dishonorable professional record and sloppy skills.

Glitches like the 2006 Lebanese fiasco, the long-term menace from the Gaza Strip which he recklessly helped vacate, the neglect of civilians North and South and the brutal cavalry charge he ordered on settlers in Amona, soured widespread evaluations of Olmert’s competence. And on top of all that hovered arrogance even in the aftermath of blatant failure.

With disengagement then still fresh in people’s minds, many recalled how Olmert energetically peddled Oslo’s derivative folly: “Disengagement will bring better defense, greater security, significantly more prosperity and much joy to all who live in the Mideast…. Together we will move forward in the direction of forging new relationships, improved mutual understanding and enhanced trust. We will sit with our neighbors, talk to them, help them, cooperate with them, become their partners, so that the Middle East will indeed transform into what it was supposed to be to begin with – the Garden of Eden upon this earth.”

Not only wasn’t he the least bit contrite, but Olmert vigorously concocted a disengagement sequel for Judea and Samaria, which he dubbed “realignment.” It was to bring the dubious bounties of Gaza’s disengagement to the elongated eastern flank of our densest population centers. Later Olmert outdid even Ehud Barak’s egregious concession offers at Camp David, only to be similarly rebuffed by Ramallah.

But above all, ordinary Israelis had enough of Olmert not because he was supposedly defamed and railroaded by unprincipled political foes but because he plainly demoralized his constituents.

11 thoughts on “Another Tack: What if his name was Bibi?”