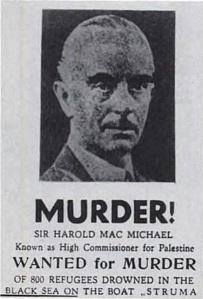 Exactly 70 years ago – on February 24, 1942 – 19-year-old David Stoliar terrifyingly clung to bobbing debris in the Black Sea. At first he heard screams in the frigid waters but the voices died down. It eventually emerged that Stoliar was the sole survivor of the Struma, an un-seaworthy vessel chuck-full of frantic Jewish refugees.

World War II was already in fever pitch. Against the enormity of the then-unfolding Holocaust, the loss at sea of 768 Jewish lives (103 of them babies and children) was at most blithely overlooked as a marginal annotation.

Moreover, although these Jews fled the Nazis, in the pedantic literal sense they weren’t executed by Third Reich henchmen.

This atrocity was the coldblooded handiwork of Great Britain (committed while it combated the Germans but remarkably without compassion for their Jewish victims), supposedly neutral Turkey (whose so-called nonalignment didn’t extend to outcast Jewish refugees), by the Arabs (who were openly and unreservedly Nazism’s avid collaborators and who pressured London into denying endangered Jews asylum in the Jewish homeland) and, finally, by the Russians (who targeted the immobilized sardine can that carried Jews to whom nobody would allow a toehold on terra firma).

The entire world seemed united in signaling Jews how utterly unwanted they were anywhere.

Such apathy-cum-enmity hasn’t disappeared. Only its form and context had mutated but the essence is still ultra-relevant to the Jewish state. We’re still threatened with annihilation. Nonetheless, unmistakable harangues from Tehran notwithstanding, the international community worries about an Israeli preemptive strike – not a genocidal strike against Israel.

To put it plainly, our fate today interests other nations just about as much as the fate of the Struma’s Jews did back then, which (to resort to understatement) was hardly much.

Today’s disingenuous post-Holocaust lip-service is invariably accompanied by hand-wringing about lack of foreknowledge of Germany’s fiendish plot to systematically exterminate the defenseless Jewish people (unmistakable harangues from Berlin notwithstanding).

What sets the Struma apart and imbues it with extraordinary significance is that from December 16, 1941, until the afternoon of February 23, 1942, its ordeal was played out before the entire watching but unfeeling world. No country could deny awareness of the impending calamity and yet all countries let it happen in full view.

The Struma, then a 115-year-old Danube cattle barge, was a pitiful peanut-shell of a boat packed with nearly 800 refugees from Romania. Bound for the Land of Israel, they desperately fled Hitler’s hell and the horrors of Bucharest’s fascist regime. Pogroms and ghastly atrocities had already sullied cities like Iasi, where thousands of Jews were assembled in the market square and mowed down with machine guns. Venerable old rabbis and Jewish community leaders were impaled on meat hooks in town centers.

The Struma wasn’t struck suddenly. It was slowly tortured, accentuating with demonic deliberation how disposable Jews were, just when genocide’s monstrous machinery was switched into high gear. This 75-day shipboard melodrama underscored the total helplessness and humiliation of Jews without power.

Struma passengers gathered in the Romanian port of Constanza on December 8, 1941. For four days, Romanian customs officials “examined” their belongings. In fact, they pilfered all they saw – clothing, underwear, jewelry and most important, food. The immigrants left on the perilous journey bereft of provisions and medications. But the Struma did carry 30 doctors, 10 engineers and 15 lawyers.

On December 12, the rickety vessel chugged out to sea. After four hair-raising days (instead of the routine 14 hours) the Struma unsteadily dragged itself into Istanbul Harbor. It couldn’t continue. Its makeshift motor had sputtered its last. There was no fuel, food or water.

Several passengers held valid entry visas into pre-independent Israel. All others were “illegals.” The hope, though, was that once in Turkey, they’d all be allowed to proceed to their destination. After all, with Europe in the throes of war, thousands of Jewish immigration certificates (British Mandate permits) remained unutilized.

But the British authorities refused unequivocally. The Arabs raged and rallied against giving haven to Jewish refugees. Eager to appease pro- Nazi Arab opinion, Britain chillingly declared that under no circumstance could the Struma’s human cargo set foot in Eretz Yisrael.

Furthermore, Britain pressured Turkey not to let anyone off the crippled boat at its end either. Obligingly, the Turkish premier argued that “Turkey cannot be expected to serve as a refuge or surrogate homeland for people unwanted anywhere else.”

Thus hundreds were imprisoned in narrow, unventilated confines. A sign saying “Help!” was suspended over the Struma’s side. One of the visa-holders, who after weeks was allowed ashore, described the boat as a “floating coffin.”

The freezing hull below reeked, but there wasn’t sufficient room on deck. Refugees took turns to climb up for a breath of air. There was no sleeping space for all, no infirmary, no galley, no bathing or sanitary facilities. Minimal food rations, provided by local Jews, were smuggled aboard after enough Turkish palms were greased.

An official Jewish Agency appeal, forwarded to the British on January 19, 1942, stressed that the Struma transported refugees escaping the most tangible threat of massacre. The Mandatory authorities didn’t even dignify the Jewish Agency with a reply.

On the next day, the Struma’s 35th in Istanbul, the Wannsee Conference opened in suburban Berlin to formally decide on “the final solution for the Jewish problem.” Hitler surely hadn’t overlooked this latest demonstration of utter callousness toward hapless Jews.

The British didn’t bother to answer ensuing emotional Jewish Agency entreaties on January 30 and February 10. Then they acquiesced to the entry of four visa-holders, who only at this point were permitted to disembark. More news of the dreadful conditions on the Struma now came out.

The new British line was that the Struma’s refugees were suspect Nazi agents because they came from enemy territory. The assertion that the Germans’ most hideously persecuted victims were their tormenters’ spies was labeled “Satanic” in embryonic Israel.

In a very long February 13 communication to the Mandatory government, the Agency noted that Britain was helping with much fanfare to resettle in the Mideast thousands of non-Jews – Greeks, Yugoslavs, Poles and Czechs – all of whom came from German-controlled areas. More than any of them, Jews had reason to be loyal to the Allies.

On February 15, the British announced they’d make an exception in the case of Struma children aged 11 to 16. Wartime rationing was cited as the pretext for barring younger or older kids. The Jewish Agency guaranteed maintenance for all 103 underage Struma captives. In the end no child was freed.

Meanwhile, Turkey, egged on and emboldened by Britain, threatened to tow the floundering deathtrap beyond its territorial waters. The Jewish Agency warned that “the boat is in total state of disrepair and without life-saving equipment. Any sea-journey for this vessel cannot but end in disaster.”

The Turkish government, however, pitilessly ordered the condemned Struma tugged out to the Black Sea. Hundreds of truncheon-wielding Turkish policemen were dispatched to the Struma on February 23. They viciously clubbed passengers below deck. Despite resistance from the refugees, the anchor was cut, the Struma was towed out and was left paralyzed, to drift precariously without supplies or a drop of fuel.

On February 24, an explosion ripped it apart.

A Soviet submarine, Shchuka-213, patrolled northeast of the Bosporus. Stalking Axis craft, it torpedoed the wobbly barge, which sank in minutes. It’s estimated that as many as 500 were killed outright by the blast. The rest flapped feebly in the waves, till they expired of wounds, fatigue and hypothermia. Stoliar alone hung on, semi-conscious.

In pre-state Israel there was shock and grief. Demonstrations were mounted. For one day all work and commerce were halted and the population imposed a voluntary protest curfew on itself. Posters appeared on exterior walls everywhere bearing British High Commissioner Harold Mac Michael’s photo and announcing that he was “Wanted for Murder.”

The Struma’s heartrending end marked the effective end to most attempts to break Britain’s anti-Jewish blockade until the conclusion of WWII. A few fishing and sporting sailboats briefly tried to ferry handfuls of refugees. Some of them were sunk. Europe’s Jews had no escape left. Embattled Britain took time out from the war to make sure of it.

Stoliar was imprisoned by the Turks for six weeks for the crime of not drowning. He was finally allowed into Mandated Palestine despite Mac Michael’s warnings that “this would open the floodgates” and “completely undermine our whole policy regarding illegal immigrants.”

Oblivion is perhaps the greatest sin against the Struma but also against ourselves. If we forget the Struma, we forget why this country exists, why we struggle for its survival. We forget the justice of our cause.

Dimmed memory and self-destructive perverse morality hinder our ability to protect ourselves from the offspring and torchbearers of the very Arabs who doomed the Struma. They haven’t amended their hostile agenda. We just don’t care to be reminded.

The state the Jews created is threatened with destruction and its population with obliteration. Yet there’s negligible sympathy for Israel and even less practical support to avert tragedy. The Struma’s story is seminal in understanding why the Holocaust was possible and why a second Holocaust cannot be ruled out. More than anything, the Struma powerfully illustrates what happens when Jews rely on others’ goodwill.

29 thoughts on “Another Tack: Lessons from the floating coffin”