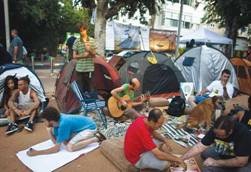 News flash: There’s cheap rental housing in Tel Aviv. Dirt cheap. So cheap, in fact, that illegals from Ghana and Nigeria, Guatemala and Columbia, Thailand and Outer Mongolia, can afford it. But that’s not where the privileged children of the well-heeled classes wish to fulfill fantasies of Friends, Sex and the City or Gossip Girl.

Indeed, the Old Central Bus Station environs, like the Shapira or Hatikva quarters, aren’t Tel Aviv’s equivalents of somewhere-fashionable-in-the-heart-of-Manhattan – where latter-day bohemians reside in style while posing as suffering artistes and empathizing with the downtrodden masses of the Earth.

The equivalents are “Heart-of-Tel-Aviv” neighborhoods (like the swanky Sheinkin drag), even select elitist edges of Jaffa and that glorified-gentrified Florentin niche. But topping it all for prestige and desirability is Tel Aviv’s “Old North,” radiating from the upmarket Habimah Theater-Mann Auditorium hub.

At that posh pivot, trendsetters and groupies pitched their tent city to campaign for lower/subsidized rents. We, wage-earners in the rest of the country, are presumably required to foot their extravagant bills and make Israel’s Manhattan ambiance more affordable. Since Manhattan is so overpriced, the affectation becomes more attainable in the homeland, in conditions of comparable comfort and proximity to social focal points – where it’s all happening.

That, however, as elsewhere in the world, is where it’s most expensive to rent the proper setting for the pretentious pipe dream. It’s location, location, location – the greater the demand, the higher the price-tag.

I personally know some of the Rothschild Boulevard protest-instigators. I also know their affluent families (whose incomes far exceed my own meager salary). They hail from my Sharon-region hometown and from even better-off nearby communities.

Several of the tent-happening’s ringleaders are my daughter’s erstwhile schoolmates and friends to this day. Their exceptional good tastes have always meant shopping for the most impressive brand-names and running up bills that annoyed even their prosperous parents. They also gravitate to pricey eateries, drinking holes and clubs.

One by one, they ditched manicured suburbia for the lure and lights of ersatz Manhattan, where they can play the role of independent, struggling young professionals.

Some are chronically “between jobs” and/or between schools, seeking to find themselves and their true calling. Some dabble in showbiz. They’re invariably agonized by the lack of popular recognition for their outstanding talents and hidden depths. Some smoke funny things, and all, without exception, are trendily left-wing – as befits rebels against bourgeois mom and dad (who nonetheless help pay the rent and provide laundry services).

Alas, they can’t quite formulate what they want or quite how to go about achieving it. It’s all about the perceived exhilaration, not the practical solution. The buzz is the message.

They flaunt political affiliations like Hadash – the largely Arab remnant of the local Communist Party, which is today headlined by MKs Muhammad Barakei, Haneen Zoabi and token Jew Dov Henin. No wonder former Tel Aviv mayoral candidate Henin was welcomed with whoops and cheers in tent city, whereas Mayor Ron Huldai (Labor), who defeated Henin, was booed and rudely ejected.

Likud MK Miri Regev, a social activist in her own right, was denounced as fascist and doused with water. The fact that ritzy demonstrators blame their dire hardship on settlers should have tipped her off.

Political patrons purchased nifty tents for the sons and daughters of our well-to-do compatriots. These pampered radicals, with less-moneyed hangers-on, hanker after thrills. They yearningly eye Cairo’s Tahrir Square and cultivate visions of generating similar excitement here. Note the pervasive anti-Bibi/bring-the-government-down slogans chanted by the mobilized/manipulated thousands who joined their march last weekend.

The saddest facet of the farce is the uninhibited eagerness of politicians to hitch a free ride on the flimsy coattails of Tel Aviv’s chic set. Take the input of Haifa Mayor Yona Yahav, for example. In a Yediot Aharonot op-ed, he self-importantly reminded us that “the upheaval in Tunisia, which felled its corrupt regime, began with the slapping of a cop’s face in the market. I suggest our government regard the Rothschild Boulevard protest as a slap in its face.”

Doesn’t Yahav just know how to please his audience and deliver the lines it wants to hear? It’s a knack he has often displayed in the past.

In 2006 he was asked during an interview with the Israeli Arabic-language weekly Kul al-Arab whether he’d accept in principle the return to Haifa of “tens of thousands of Arab refugees” who left it in 1948.

Yahav replied he “wouldn’t mind their return” in the context of a peace agreement, adding: “In all sincerity, I feel the refugees’ pain… because my father, too, tasted the bitterness of homelessness and loss after he fled Germany.”

There’s no ambiguity about Yahav’s motivations. As he stressed in the interview, Haifa’s then-35,000 Arabs comprised 13 percent of its population, and Haifa has become a magnet for Arab villagers (a fact Yahav welcomed). Any politician worth his salt is bound to suck up to potential voters.

Yet the problem wasn’t so much Yahav’s vote-getting scruples as what his prattle portended. Yahav mindlessly echoed the outermost fringes of Israel’s loony Left who explicitly advocate what the Arabs sanctify as “the Right of Return” – i.e., inundating Israel with millions of hostile, irredentist Arabs, thereby wiping the Jewish state off the map.

That confirmed Yahav as an expedient follower of any fashion – even that of voguish avant-garde circles, for whom faddishly thumbing noses at the Jewish collective is de rigueur and proof positive of enlightenment. Yahav’s chatter is alarming because he’s no oddball iconoclast but a solid rock of the establishment, a veteran Laborite before jumping on Kadima’s bandwagon.

Indeed, his father probably sported a thoroughly Germanized name and did his darnedest to blend in and convince all and sundry of his Teutonic traits. The fact that Germans still wanted him dead attests not only to the futility of obsequious gestures, but to the incontrovertible need for a strong Jewish state.

Why didn’t Yahav remind his interviewer that the flight of Haifa Arabs in 1948 alarmed Jewish leaders, who desperately tried to stop it? Ben-Gurion sent Golda to Haifa Beach to plead with departing Arabs, but they were terrified of their despots. Yahav could have cited for the benefit of Kul al-Arab readers Ben-Gurion’s May 5, 1948, diary entry, in which he expresses puzzlement at the Arab abandonment of Haifa.

“What could cause so many thousands to flee thus?” Ben-Gurion asked in his own private journal. Discussing Haifa’s desertion on May 11, 1948, Golda admitted: “We entered this war unprepared for victory.”

Was Yahav unaware of this? Maybe not. Just as maybe, deep inside, he understands that his Tunisia-Tel Aviv analogy is spurious.

But is there any opportunity ambitious politicos would pass up? Probably not.

10 thoughts on “Another Tack: Between Tunisia and Tel Aviv”