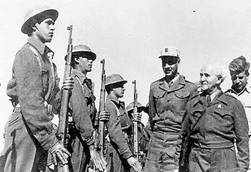 Fear-mongering is largely the forte of the fringes. When it infects the mainstream, however, we ought to get seriously worried.

This denotes a successful scare-job by forces who, in the words of America’s immortal satirist H. L. Mencken, aim “to keep the populace alarmed – and hence clamorous to be led to safety – by menacing it with an endless series of hobgoblins, all of them imaginary.”

There’s therefore more than ample cause for concern when Ehud Barak conjures up tsunami images to warn us that we’re about to be inundated if we don’t heed him. It’s even more disconcerting that he infects others, who then wail, panic-stricken, about the imperative to stem the tide with yet more conciliatory concessions.

To be sure, what we may face in the UN come September will be unpleasant. No joy will be instilled in our hearts when the General Assembly’s automatic Israel-bashing majority votes in favor of Palestinian statehood within the 1967 lines – in flagrant disregard of what led up to 1967 and what later followed.

Yet we needn’t quake and shiver in our sandals. We have been through worse.

If we survived the seismic surge of 1947- 1949, September should be a walk in the park. Even back then – just before and after Israel’s birth – our political landscape abounded with Barak sorts. They, too, were prone to getting cold feet.

If it were up to them, Israeli independence wouldn’t have been declared when it was. History’s one-off opportunity was seized only thanks to David Ben-Gurion’s pluck and outright bossiness. Without him, this singular chance might well have been missed.

Likewise, if not for Ben-Gurion, Jerusalem wouldn’t have become the Jewish state’s capital. The 1947 UN partition plan earmarked a status of corpus separatum (separate entity) for Jerusalem, to be overseen by international administrators.

Since the Arabs had already violently rejected the Partition Resolution, besieged Jerusalem, conquered and occupied parts of it, expelled all Jews from the Old City and demolished sacred Jewish sites, Ben- Gurion saw no logic in unilateral Israeli adherence to impotent UN proclamations.

On December 5, 1949, five days before the UN General Assembly was to reiterate the internationalization of Jerusalem (and kick off preparations to take control), Ben- Gurion defiantly declared Jerusalem as Israel’s capital.

Without trepidation he told the Knesset: “We consider it inconceivable that the UN would attempt to sever Jerusalem from the State of Israel or infringe upon Israel’s sovereignty in its eternal capital…

“Jewish Jerusalem will never accept alien rule after thousands of its youths liberated their historic homeland for the third time, redeeming Jerusalem from destruction and vandalism.

“We do not judge the UN, which did nothing when member-nations of the UN declared war on its resolution of 29 November 1947, trying to prevent the establishment of Israel by force, to annihilate the Jewish population in the Holy Land and to destroy Jerusalem, the holiest city of the Jewish people.

“Had we not been able to withstand the aggressors who rebelled against the UN, Jewish Jerusalem would have been wiped off the face of the earth, the Jewish population would have been eradicated and the State of Israel would not have arisen.

“Thus, we are no longer morally bound by the UN resolution of November 29, since the UN was unable to implement it.

“…The attempt to sever Jewish Jerusalem from the State of Israel will not advance the cause of peace in the Mideast or in Jerusalem itself. Israelis will give their lives to hold onto Jerusalem, just as the British would for London, the Russians for Moscow and the Americans for Washington.”

The UN remained impervious. On December 10, 1949, its General Assembly voted by a whopping majority (38-14, with seven abstentions) to uphold its 1947 resolution and place Jerusalem under the auspices of a UN Trusteeship Council, to be governed by the council’s own appointees.

That was the tsunami of 1949. It threatened to engulf fledgling Israel. But Ben-Gurion didn’t lose his cool.

Instead of bowing to pressure, he mounted the Knesset podium yet again to repeat what he had enunciated a mere few days earlier: “We cannot assist in the forcible separation of Jerusalem, which would unnecessarily and unjustifiably violate the historical and natural rights of the Jewish people.”

He assertively stressed that “the State of Israel has had, and will always have, only one capital – eternal Jerusalem. This was so 3,000 years ago and so it will be, we believe, to the end of time.”

Ben-Gurion then put to the plenum’s vote his proposal to transfer the Knesset and the government from Tel Aviv to Jerusalem. It was approved.

The 1949 tsunami didn’t swallow little Israel up. The resolution remained as another testament to the UN’s self-accentuated irrelevance. Most foreign embassies remained in Tel Aviv, but no foreign overlords were installed in Jerusalem. We were far more vulnerable then.

There literally wasn’t enough food to feed the population. We weren’t the world’s darlings even when we fought for our very lives three years post-Holocaust.

During their entire long UN-flouting invasion of newborn Israel, the Arabs were actively aided and abetted by the Brits, while the Americans slapped an arms embargo on us. The UN, which didn’t stop the concerted multi-state Arab assault, found nothing better to do than send observers to keep tabs on “illegal” Israeli moves.

This is something for successful, strong Israel to remember. Current tsunami alarms are being raised by obsessive Osloites with political axes to grind, who anyhow serially advocate Israeli retreats under all circumstances and pretexts.

What’s forecast for September is more akin to an extortion threat than a horrific cataclysm. It’s quite likely that the UN will adopt another in a dishonorable list of declarative anti-Israel resolutions. But that won’t necessarily make it a tsunami (just as the November 10, 1975, Zionism-is-racism resolution didn’t).

Not all tsunami predictions unavoidably result in deadly deluges.

If our knees don’t buckle, we won’t fall and won’t be swept away.

Remember: The last person who wants the IDF out of Judea and Samaria is Mahmoud Abbas. He knows that the immediate upshot would be his brutal ouster and a Hamas takeover. Besides, Abbas doesn’t control the entire area the UN purports to sign over to him. Nevertheless, hardly exuding liberal pluralism, he repeatedly stipulates that the territories must be absolutely judenrein. Will the UN help him evict 660,000 Israelis from parts of Jerusalem and beyond?

We won’t be this September, either, on condition that we don’t scare ourselves to death. Mass-hysteria can turn a trickle into a tidal torrent.

7 thoughts on “Another Tack: Remember the tsunami of 1949”