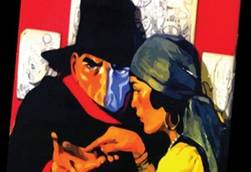 Our mainstream media could hardly contain their glee last week when the state attorney flatly rejected pleas to accord Margalit Har-Shefi a retrial. Opinion-molders bristled indignantly at the very suggestion that she might be exonerated. This, they righteously pontificated, would constitute a first step to releasing Yitzhak Rabin’s assassin Yigal Amir.

Just 19-years-old at the time, Har-Shefi was arrested post-assassination in 1995 because she was Amir’s classmate and friend. The prosecution alleged she knew of his intentions yet failed to phone the police. Eventually she was tried, convicted and imprisoned for the rarely prosecuted offense of not preventing a crime.

It was all shades of the Shadow – that icon of old-time radio, comics, pulp fiction and the movies – who knows what evil lurks (or doesn’t) in the hearts of men (and presumably women too). Seemingly only Israeli judges possess Shadow-like infallible preternatural penetrating powers to ferret out a girl’s deepest and darkest secrets.

Har-Shefi’s ordeal lasted years. She lost successive appeals and was imprisoned in March 2001. Throughout, she vehemently denied advance knowledge about the assassination. The majority of judges, presumably having accessed her innermost consciousness, ruled otherwise. It was her word against their opinion. There wasn’t a shred of corroborating evidence against her.

CONTRAST HAR-SHEFI’S case with that of Yasra Bakri of the Galilee Arab village of Bueina, who was acquitted in 2005 of the identical accusation. On August 2002, on her way to Safed, Bakri was warned to leave the bus. She grabbed her girlfriend, also Arab, and both hurriedly got out, without tipping off passengers waiting to board that very bus at that same stop. A while later, at Meron, the suicide-bomber detonated his charge, taking nine lives.

Bakri not only let others get on the condemned bus, but she never alerted the police. Nonetheless, having presumably read her thoughts, the judge generously gave her the benefit of his doubt.

Bakri’s case, however, brimmed with corroboration. Normal passengers, having paid full fare, don’t flee without cause and catch a cab instead. They don’t inconvenience themselves and incur a hefty expense for nothing.

Moreover, the bomber spent his last days in Bakri’s village, harbored by her relatives (who were tried and convicted). Bueina is no sprawling metropolis. It stands to reason that he recognized her and she understood the nature of his warning.

No such evidence ever existed against Har-Shefi. During her association with Amir there wasn’t a blot on his record. Indeed, Amir’s other friends, exposed to the same rhetoric from him, weren’t prosecuted, to say nothing of Shin Bet agent-provocateur Avishai Raviv, who didn’t pay for his pivotal role in the conspiracy and who actively helped build the case against Har-Shefi.

She was the only settler in Amir’s entourage, perhaps making her the perfect target for vilification. Her parents received hate-mail, including a letter accusing them of having raised a “malignant tumor in your criminal settlement.”

The media focused on her relentlessly and maliciously. The hapless teen was raked over the coals even for such transgressions as changing her haircut or attending a bat-mitzva. She was fired from her job and became a despised public enemy.

If Amir was Clyde, Har-Shefi was demonized as his Bonnie.

Upon Har-Shefi’s release in August 2001, she was greeted by protesters who screamed “murderer” at her. When Bakri was let off the hook, the media feted her. She, family and friends were sympathetically interviewed.

BUT THE bias against Har-Shefi was decisively underscored when it became evident that her prolonged torment was for naught. Then Shin-Bet chief Ami Ayalon could have ended the willful abuse in an instant. He verified this himself, when boasting in 2007 that he possessed “intelligence information” clearly establishing that “Har-Shefi didn’t imagine what Amir planned. I know – I was Shin-Bet head.”

Ayalon took over the Shin-Bet from Carmi Gillon shortly after the assassination and stayed on for five years, precisely when poor Har-Shefi sought desperately to extricate herself from the crime of befriending the wrong coed. Both Ayalon and Gillon affirmed afterward that Har-Shefi wasn’t guilty and supported presidential clemency to reduce her sentence by a third (when the parole board refused).

However, in real time Ayalon allowed his agents to lie prodigiously and incriminate a faultless adolescent, without lifting a finger. The case couldn’t be pursued were the serving chief of the Shin-Bet resolutely upright – whether publicly or behind closed doors.

Current Supreme Court President Dorit Beinisch must have also entertained suspicions in real time. When serving as state attorney (from early 1989 through the end of 1995), she approved fielding Raviv as a Shin-Bet agent-provocateur.

It was Raviv who handed TV newsmen a small homemade photo-montage of Rabin in SS uniform, one to this day exploited to besmirch Rabin’s legitimate political opponents. The assassin himself was Raviv’s sidekick, goaded by him to do the deed.

On September 22, 1995 – only weeks before the assassination – Israel state television titillated its viewers with particularly eerie footage shot in the wee hours in a deserted graveyard. A group of adolescents clustered around a tombstone, apparently taking part in a creepy clandestine initiation. The fact that their supposedly secret ceremony was conducted obligingly before TV crews astoundingly didn’t undermine the credibility accorded the sensational videos.

That rite caused a covert Jewish “terror ring,” dubbed Eyal, to burst irresistibly onto public awareness. The post-assassination Shamgar Commission of Inquiry would reveal it as stage-managed, a fake, a set-up.

Raviv was the ringleader who swore in “recruits” to the bogus underground. To garnish this defamatory exploit with “moral authority,” he chose as his theatrical setting the last resting place of Lehi leader Avraham “Yair” Stern, who was cold-bloodedly murdered by the British in February 1942. Raviv even had his eccentric followers sing out Yair’s anthem “Hayalim Almonim” (Anonymous Soldiers).

AS IT later emerged, this was all part of a scheme to tarnish the ideological so-called Right, to paint its adherents as wild-eyed hooligans and hotheaded nutcases who instigate mayhem and violence and relish nothing more than tossing flaming matches into our regional tinderbox.

Someone was clearly interested in amplifying Raviv’s shenanigans and he got unstinting resonance, especially when Raviv implicated Eyal for the homicide of an Arab slain by fellow Arabs in Halhoul that September.

A subsequent suit against Raviv for libel and his macabre midnight pageant was closed – for “lack of public interest” – by Edna Arbel, Beinisch’s best friend, successor as state attorney and now a Supreme Court justice herself.

In 2003, Raviv was absolved of the very charge he badgered Har-Shefi to “confess” to in the Shin-Bet interrogation facility. This time judicial telepathy yielded the reverse results and press tolerance proved suitably selective.

We have to take her word for it because we’ll never know for sure. Maybe a retrial was vetoed so that we’d never find out.

5 thoughts on “Another Tack: Shades of the Shadow”