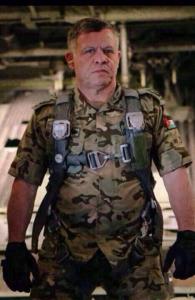 King Abdullah in combat mode: The buzz was that Clint Eastwood’s royal torchbearer would himself participate in airstrikes [Royal Hashemite Court]

Jordan’s King Abdullah may be barely hanging in there – thanks mostly to Israel’s tacit support – but there are times when we Israelis must envy him. His PR is peerless. We see him posing in camouflage combat gear and the entire civilized world can’t applaud the macho-man loudly enough.

In a photo circulated by his palace, Abdullah strikes a daunting figure – the great hope of the world’s democracies. Their hype/hope is that Abdullah will fight their fight against Islamic State (ISIS a.k.a. ISIL). To boot, Abdullah is a Muslim which is awfully handy for the spin that IS barbarities shouldn’t color our attitudes toward Islam.

But Muslims have always been fighting Muslims in numerous internecine wars between rival factions of Islam. Abdullah, moreover, isn’t the only Muslim headliner who today wages war – such as it is – on IS. Damascus despot Bashar Assad does the same.

Assad’s anti-IS tactics have included gassing thousands of his own compatriots. Does that make him a good-guy? Do Assad’s Hezbollah foot-soldiers also deserve rehabilitation because they form the actual backbone of the anti-IS campaign? Does Iran, Assad’s and Hezbollah’s senior patron, get into our good-Muslim list because it too is so incontrovertibly against IS?

The Middle East confounds our predilection to regard our enemy’s enemy as a friend.

Such configurations never work in the mutually destructive Muslim sphere. Most of the combatants on the many battlefields all around us are intrinsically the worst of the world’s bad-guys. When the bad-guys fire at worse-guys, their Muslim devotions – each in his doctrinaire manner – don’t prove Islamic goodwill.  They establish nothing about who purportedly perverts Islam’s message and who doesn’t.

None of the warriors on Iraq’s, Syria’s, Libya’s or Yemen’s killing fields do. They all shed blood without compunction. They all are Muslim to the core and the Islamic realm was always violent.

But back to Abdullah, this half-British scion of the Arabian Peninsula’s Hejazi lineage might not win popularity contests in the Mideast but the West positively adores him.

No sooner was caged Jordanian pilot Muath al-Kassasbeh burned to death publicly by IS, than Abdullah vowed retribution. Members of the US House Armed Services Committee attest that immediately upon having heard of his pilot’s horrific execution, Abdullah (then the Committee’s guest in Washington) quoted Clint Eastwood’s character Bill Munny in the 1992 movie Unforgiven:

“Any man I see out there, I’m gonna kill him. Any son of a bitch takes a shot at me, I’m not only going to kill him, I’m going to kill his wife and all his friends and burn his damn house down.”

Imagine if Binyamin Netanyahu swaggered thus. Indignant condemnation of Bibi’s fascist pose would have dizzyingly whirled around the planet and picked up more vehemence with each furious rotation. But what’s unthinkable for some is only to be exhorted in others.

Abdullah avenged al-Kassasbeh by promptly hanging two convicted terrorists and the enlightened ones everywhere extolled his true grit and dogged determination. Liberal Israel doesn’t execute even the most heinous of terrorists but is mercilessly trashed by the same enlightened ones. Murderers like Marwan Barghouti, convicted by Israel’s super-liberal courts, are depicted as prisoners of conscience and Netanyahu is pressured excruciatingly to let more convicted murderers loose as “goodwill gestures” to terror masterminds.

Around the globe both the loony Left and the righteous Right cheered as Abdullah put on battle fatigues and grimaced grimly. He let the world know how utterly angry he was and the unanimously sympathetic international community was unanimously impressed.

The foreign media approvingly counted the number of sorties by Jordanian fighter-jets and praised the destruction they sowed – civilian collateral-damage notwithstanding.

America’s politicos fell all over themselves to grant more military aid to embattled Jordan. After all, Abdullah in his ultra-virile posture had promised to rain hellfire on the jihadists and not let up until his forces “run out of fuel and bullets.” That’s telling them. Hence Abdullah’s Washingtonian boosters needed to make sure that he runs out of absolutely nothing in his justified vendetta.

The buzz from the Hashemite palace was that Eastwood’s royal torchbearer would himself participate in airstrikes. He never did but the story packed a punch.

Left-wingers loved it because Abdullah’s wrath seemed to take the Obama administration off the hook. No need take action if the badass monarch is on the case. On Fox News Abdullah became an overnight right-wing hero. Sean Hannity asked his fans: “Who do you think is tougher – King Abdullah or President Obama?”

But this over-the-top adulation for Abdullah is no laughing matter. More than anything, it highlights the international community’s hypocrisy.  When Israel deploys air power against terrorists of the same ilk as IS, no one rushes to make sure we stay well-armed. The knee-jerk response is to cut off military supplies and haul us to the UNHRC’s kangaroo court (where searing anti-Israel verdicts are scripted in advance).

Israel has no right to rage. It even has no right to elementary self-defense. When thousands of rockets were rained down last summer on Israeli civilians, the world remained remarkably unperturbed. Pandemonium wasn’t triggered by the provocation but by our response to that provocation – as if rocket barrages on metropolitans centers, towns and villages are perfectly commonplace and acceptable anywhere.

In reality, the Jewish state has always been the striking exception to what’s acceptable or unacceptable anywhere. The excuses range from our supposed disproportionality to our supposed imperialist stigma.

No one abroad dwells on the fact that Jordan is a wholly artificial imperialist concoction (by the British) and that Abdullah’s royal dynasty constitutes a relatively recent imperialist import. Jewish sovereignty in the Jewish homeland, though, is inherently insufferable.

Then there is the matter of measuring what’s proportionate. Has anyone tallied the numbers of innocent casualties caused by Abdullah’s bombers? Of course not. As any fair-minded analyst would remind us, inadvertent casualties are unavoidable when terrorists like the IS villains deliberately base themselves among civilians.

And yet the statistics of inadvertent casualties aren’t only kept when it comes to Hamas, but they are cynically inflated. Moreover, the world laps up the lies and is outraged by the temerity of Israeli self-defense. Even passive made-in-Israel anti-rocket shields are dissed for affording us “unfair advantage.” Foreign body-counters presumably would like to see more Jewish bodies.

Yet, in truth, even Jewish bodies don’t elicit empathy. The nuance is that Jews somehow earn their misfortunes.

The abduction of three Israeli school boys on their way home last June was lukewarmly described by the White House as a “disappearance.” The abiding concern was that it shouldn’t instigate aggression by ogre Netanyahu. The subsequent discovery of the three bodies generated no horror overseas. The same goes for the ax-murder of four elderly congregants mid-morning prayers in Jerusalem.

From there it’s but a very short hop to downplaying any terror against Jews. Hate for Jews leads to the targeting of Jews but then the very hate is denied. That makes the killing of Jews something banal and capricious. No cause for commotion.

This is the same mindset that produced the Soviet/Russian version of Holocaust-denial. It didn’t deny the carnage but merely obfuscated the identity of whom Hitler singled out for systematic extermination. Thus, according to Soviet historiography, there never was specific anti-Jewish slaughter in Nazi-ruled Soviet territory. No rationale is given for why certain Soviet citizens were deliberately selected by the Nazis for systematic extermination.

It all happened randomly. A big bunch of hapless Jews were just in the wrong place at the wrong time, much like the Sabbath-eve shoppers at the kosher supermarket in the heart of a very Jewish Paris neighborhood last January 9. With all the moral authority invested in him, US President Barack Obama told us that a “bunch of” zealots had “randomly shot a bunch of folks at a deli in Paris.”

Obama seemed to engage in verbal somersaults just to avoid the Muslim moniker or the adjective “Jewish.”

*We might big-heartedly give the leader of the free world the benefit of our doubt – perhaps he inoffensively misspoke, tripped by his own tongue yet again. But then two top Administration spokespersons elaborated on Obama’s random-attack theme, a fact that makes us suspect a rehearsed official line.

Later good ole Jen Psaki, Earnest’s State Department counterpart, got even goofier when asked to comment on both Obama’s and Earnest’s assertions: “Well, if I remember the victims, specifically, they were not all victims of one background or nationality, so I think what they [Obama and Earnest] mean by that is… I don’t know that they spoke to the targeting of the grocery store specifically but the individuals who were impacted.”

After the ensuing ruckus both Jen and Josh tweeted an embarrassing admission that anti-Semitism was a factor. The reluctant and belated admission, nonetheless, came as postfactum damage-control in a medium that has far less impact than formal news briefings.

That said, it’s not as if Obama alone belittles Jewish pain. Who can forget then-EU foreign policy chief Catherine Ashton’s 2012 remarks on the slaying of a teacher, his two toddler sons and an eight-year-old girl at a Toulouse Jewish school?

Ashton too omitted mention of who the victims were and lumped the point-blank executions with an assortment of other misfortunes (including a bus accident) which are unrelated and therefore plainly diminish from the barbarity of the Toulouse crime.

All Ashton could come up with was a terse noncommittal reference to “what happened in Toulouse,” as if the victims weren’t shot in the head, each at close range, to verify their deaths. Little Miriam Monsonego was even chased by the Muslim gunman who grabbed her hair and, yanking it hard, pinned his pistol to her temple and pulled the trigger.

This is malice aforethought in the utmost extreme. The victims’ sole crime was that they were born to Jewish parents – just like the Jewish kosher market shoppers in Paris, just like the three school boys from Kfar Etzion, just like the worshippers in Jerusalem.

Ashton, Obama, Earnest and Psaki prefer that Jewish victims be swept into the dust bin of history. In contrast, the world saw the king from Amman suffer a single loss and enthusiastically affirmed his right to retaliate. Oh, to be Abdullah!

8 thoughts on “Another Tack: Oh, to be Abdullah!”