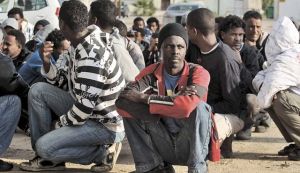 On the sidewalks of south Tel Aviv

The High Court of Justice has dealt Israeli democracy a grievous blow this week when for the second time in a year it nixed the notion of detaining illegal infiltrators and struck down Knesset legislation on the matter.

The operative upshot is that 2000 detainees will soon be back on the crime-ridden streets of south Tel Aviv – which has been turned into a festering lawless African enclave – exacerbating the already dreadful plight of its Israeli residents.
Worse yet, it means that all Africans have now been told that if they only manage to sneak into the Jewish state, they’d become legally invulnerable despite having willfully broken Israeli law by their illegal entry. This is a potent message.
The fence erected along much of the Israeli-Egyptian border won’t entirely stem the tide. Fences can be breached (as Gaza has only recently shown us).
But the direst wallop was delivered to what remains of Israel’s separation of powers, which pro forma guarantees that the different branches of government each retain independent authority and responsibility, thereby preventing any single branch from overwhelming and diminishing the others. Going against this fundamental rationale, Israel’s super-dominant High Court has essentially decimated any theoretical shreds of checks and balances.
This isn’t the stuff of abstract rumination by legal philosophers. Judicial ultra-interventionism affects the daily lives of Israelis and its ramifications especially impinge on the rancorous controversies that polarize public opinion.
The High Court to date has vetoed over twenty laws duly adopted by the Knesset, steadily eroding its authority.
Moreover, only by a hairsbreadth did the Court avoid doing the same in other exceptionally divisive  issues (like allowing Palestinian “family reunifications” within Israel proper, which would have meant an unimaginable inflow of hostile Arabs into this country, thereby upsetting its entire demographic equilibrium). The narrow margins by which such near-calamities were averted are no less frightening than the Court’s actual high-handed judgments that overturned sometimes existential legislative decisions.
Most alarming is the fact that the nine High Court justices have usurped nearly unchallengeable powers for themselves. There appears to be no avenue left for overcoming their imperiousness. The consequences for our democracy are potentially staggering.
The Knesset is directly elected by the voters and directly reflects the mood and opinions of the electorate. Overruling the citizenry’s direct representatives should be an option of truly last resort exercised only if these representatives are deemed to have egregiously overstepped their legal bounds.
Even then, cancelling laws shouldn’t be a frequently applied prerogative. Via habitual judicial hubris, the Court itself paradoxically undermines the rule of law.
Not only are our justices not elected, unlike parliamentarians, but in our system in particular the selection of justices isn’t transparent and isn’t subject to effectual vetting by either the legislature or the executive.
Our system confers inordinate powers on the serving justices to nominate new justices. Indeed the Israeli experience is that no candidate for the High Court has ever succeeded, no matter how intrinsically qualified, without the support of serving justices. This means that the justices can block the appointment of any applicant they dislike and they had done so too many times for comfort.
In other words, Israel’s highest court was entrusted with powers to replicate itself and make sure that only justices cast in its own image – sharing the same world and judicial outlooks (often even graduates of the same law schools) – will ever get to serve.
This has left us all under the sway of a small band that reflects the viewpoint of only a tiny (and shrinking) minority – the Left. This minority in point of fact rules Israel despite its recurrent electoral losses.
Inevitably such anomalies translate into detachment from ordinary Israelis – like the south Tel Avivians whose rights are regularly trampled.
Robert Bork, one of America’s prominent critics of judicial activism, wrote that “the pride of place in the international judicial deformation of democratic government goes… to the state of Israel. Israel has set a standard for judicial imperialism that can probably never be surpassed and one devoutly hopes will never be equaled elsewhere.”