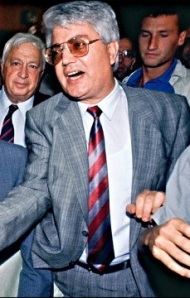 Israel’s agenda-driven pundits are strict mono-measurers with no other political yardstick but how any hullabaloo impacts on the Likud – or, more specifically, on its headliner Binyamin Netanyahu. They cheer whatever damages the Likud or diminishes Netanyahu.

Look at how the second coming of Shas’s Arye Deri’s was greeted. Regardless of obligatory hand-wringing about Deri’s criminal record, his comeback offered the Left an opportunity for undisguised gloating, owing to the loudly trumpeted assumption that Deri is sure to bite into the Bibi’s vote-getting potential.

The curious case of Communications, Welfare and Social Services Minister Moshe Kahlon was altogether a godsend allowing propagandists to crow that the Likud no longer represents regular folks. When Kahlon announced his time-out, for whatever reason, it became the leading news item both on air and on page one of the print media. It was as if a shining star had fallen.

This demands a serious reality check. Is Kahlon truly so central a figure, or was this deliberately skewed reporting designed to ingrain the impression that an actual watershed event had just crucially injured Netanyahu?

Anyone with a smidge of historical memory could be forgiven for doubting that Kahlon was the Likud’s indispensable pivot and that his absence from its Knesset slate would deal the party a critical blow. Those still capable of remembering politics before Kahlon know that he’s a relative newcomer whose unremarkable parliamentary debut occurred in 2003.

But then, in 2006, a steep upswing in his fortunes took everyone by surprise – Kahlon foremost. He was catapulted from near-anonymity to the Likud Knesset primary’s No. 1 slot. That meant he was high on Bibi’s candidates list, a fact which instantly resulted in Kahlon being lampooned mercilessly by the same expedient experts who now insincerely bewail the hiatus he took.

None of this will make sense if we don’t recognize the elementary factor at play – the consistently visceral loathing for Netanyahu. It’s not even pro forma issue-generated. It’s non-specific, all-encompassing and virtually devoid of coherent triggers. Netanyahu is reviled because he’s clearly the most viable political alternative to Israel’s left-leaning establishment.

As the single-most formidable threat to its hegemony, he must be thoroughly and unambiguously delegitimized. The last time this nation witnessed an electoral slugfest – in 2009 – this antagonism spawned such supposed slurs as “Bibi is still Bibi,” “the Bibi in him resurfaced,” “the inner-Bibi couldn’t be overcome” and “the Bibi went to his head.”

There’s no point fishing for explanations about what “the Bibi” meant, how Bibi failed to shed “the Bibi,” and from what Bibi was expected to reform. It’s immaterial. The hazy yet all-important insinuation was that “the Bibi” was somehow bad – a despicable moral flaw, an inherent failing. By not specifying, the catchphrase copywriters implied that this defect was patently obvious, an axiomatic indisputable fact.

With vague slogans like “I don’t believe Bibi,” Kadima’s spinmeisters managed during the campaign four years ago to accentuate the Tzipi-Bibi dichotomy. This became the single choice. Bibi was painted as the ogre, and Tzipi Livni became the hyped anti-Bibi bulwark. When push came to shove, even Labor and Meretz stalwarts heeded the clarion call and voted for Livni and Kadima just to “stop Bibi.”

Those who today clamor for Ehud Olmert’s return to the political arena – his conviction for breach of trust and assorted still-extant legal travails notwithstanding – resorted unabashedly to smear tactics in 2009. Those who currently insist that Olmert’s court-verified shady dealings are irrelevant and mustn’t figure in the campaign, aimed with premeditated persistence to undermine Netanyahu’s reputation, credibility and character via unverifiable innuendo, distortions, half-truths or even outright lies.

Since the electoral upset of 1977 all campaigns were about socking it to the Likud. In all campaigns where Netanyahu headed the Likud, he took the brunt of the knocks and became a convenient focus for all anti-Likud passions.

This is key in contextualizing the Kahlon episode. His ratings on the media’s popularity-meter are contingent on his relationship with Netanyahu. If Kahlon is seen as close to Netanyahu, then he is denigrated. If he is perceived as pulling away, he is lauded.

This is what predetermined the attitude to Kahlon both in 2006 and today. He was and still is used as a whip with which to lash Netanyahu. Whereas now he is crowned an authentic folk hero, it was deemed advantageous to turn Kahlon into a laughingstock when he first ran with Netanyahu. Kahlon jokes became so much of a vogue in certain circles that it was hard not to draw comparisons with the David Levy jokes of yesteryear.

It was once all the rage among the enlightened elites to scoff at the upstart construction worker from Beit She’an with no academic accomplishments but with that too-perfect hairdo, a dozen kids and enough pomposity to rival any of Menachem Begin’s Polish mannerisms.

These lowbrow David Levy jokes weren’t just in-crowd pleasantries. They were everywhere, even collected in books that quickly climbed up the best-seller lists.

They were inane and often recycled antiquated barbs aimed in Israel’s earlier days at Mapai power-broker Yosef Almogi – a man renowned for his linguistic clumsiness and lack of erudition. However, the anti-Levy versions were cruder, inestimably more infantile and infinitely more undeserved. They reflected more negatively on the intelligence of those who composed, circulated and enjoyed them than on their butt.

After Levy withdrew from politics, some of the wicked repertoire used to scorn him was redirected at Kahlon – the backbencher who did too well to be received courteously by the knee-jerk anti-Likud dispensers of conventional wisdom.

Kahlon, the son of immigrants from Libya, cut a less striking figure than the charismatic Levy and couldn’t match Levy’s oratorical flare and pathos, but there was lots else to make jest of. Before his meteoric ascendency in the Likud ranks, Kahlon ran an auto-accessories dealership. Previous to that he worked as a car electrician.

These humble beginnings sufficed to inspire lots of hilarity from left field, where assorted salon socialists supposedly dedicate themselves to the advancement of commoners just like him. Even more contemptuous chortles emanated from the Kadima crowd, although it postured as heir to the Likud’s appeal to non-Ashkenazim and to Labor’s more sanctimonious socioeconomic slogans.

A more appropriate reaction would be to envy the Likud for its inherent democracy, which allows unknowns to rise overnight to prominence. The likes of Levy or Kahlon couldn’t have made it years ago on the Left. Nevertheless, Likud liberality isn’t the whole or sole explanation for Kahlon’s coup.

The plain fact is that he benefited indirectly from Likud central committee dynamics, the sort the media ritually loves to rip to shreds.

Kahlon was among the anti-Sharon “rebels,” steadfastly resisting the political fleshpots dangled tantalizingly under his nose if he’d only support disengagement from Gaza. Yet although Kahlon stayed faithful to the platform which ushered him to the Knesset, he wasn’t a notable ideologue and not in the vanguard of anti-disengagement battles.

That meant he wasn’t high on the hit list of Trojan horses which Sharon and his sons left in the Likud central committee after they had split the party. Indeed Kahlon’s low profile meant that he featured on no-hit list during the Likud’s 2006 Knesset primary. There was no reason not to vote for him. He was that inoffensive.

Being inherently unobjectionable enabled Kahlon to pull ahead even of many leading Likud lights who had held ministerial posts pre-disengagement in the Sharon-led coalition and who thereby made themselves exceedingly objectionable to diehard Herut torchbearers. Most of these ex-ministers excelled inordinately in equivocating. They failed to preempt disengagement at the very outset, having grown too attached to their coveted portfolios, which didn’t endear this self-seeking crew to Revisionist veterans.

Benefiting by default from the ruckus was lackluster Kahlon. But why did that earmark him as the Left’s object of insipid satire? Doubtless it’s the fact that Kahlon remained on the “wrong” political side – that which this country’s opinion- molders despise.

“Wrong side” affiliation earned Silvan Shalom’s halting English much derision during his stint as foreign minister, whereas Kadima luminary Tzipi Livni’s considerably worse command of the world’s lingua franca was obligingly overlooked when she later held the same post. Compared to her, Silvan is the Bard of Avon, yet she generates an assumption of excellence.

Of course there’s no evidence of an inextricable link between degrees and common sense, but the spin about the Likud being the home of bookless know-nothings is apparently effective. To make the slur stick it pays to avoid focusing on Likudnik intellectuals. It pays to home in – with ribald ridicule where possible – on available Likud targets, such as Levy and Kahlon were, intimating that they represent the “great unwashed.” They’re a priori presumed to be unschooled, unsophisticated and unworthy.

In time, though, as Kahlon gained confidence after his 2009 ministerial appointment, a change of heart toward him became apparent on the opposition side of the aisle. He loomed as a spokesman on social justice issues. But it wasn’t his advocacy of the have-nots that won him respect.

It wasn’t even his stand against the cellphone monopolies (which wasn’t Kahlon’s initiative anyway, as the drive against the shenanigans of service-providers was kick-started and switched into high gear by Shas’s Ariel Attias).

It was, however, the fact that as professed champion of the common man Kahlon could be depicted – whether rightly or not – as Netanyahu’s in-house challenger. That suffices to make any man the darling of the anti-Netanyahu brigades.

And the darling’s departure is then sure to make it to the top of the news as a momentous game-changer.

It’s all in the partisan eye of the analyst.

3 thoughts on “Another Tack: When the darling departs”