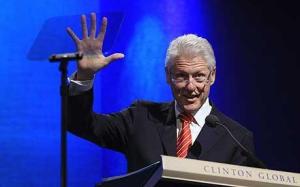 Indubitably the worst kind of nudnik is a kibitzer and the worst kibitzer is the incorrigible chronic sort who just won’t let go, who is so full of himself that he utterly fails to realize what a tiresome, preposterous broken record he has become.

Bill Clinton, US ex-president and darling of all too many of his country’s inveterate Jewish liberals, doubtlessly knows that the Yiddish- derived “nudnik” denotes a nag, a pest and an all-around nuisance. At about the same time as “nudnik” became entrenched in American colloquialism, the Yiddish verb “kibitz” likewise entered the lexicon and its current dictionary definition is “to intrusively offer unwanted, meddlesome advice to others.”

Nudnik Clinton kibitzes with habitual relish, as if his assertions are valid and as if his judgmental pronouncements still count.

No matter how hard we try to consign him to the hindmost recesses of our memory, he keeps popping up with another exasperating rerun of the irksome old routine. In his latest kibitz-fest he lashed out at Prime Minister Binyamin Netanyahu, insisting that the reason no Israeli-Palestinian peace has yet blossomed is the fact that obdurate Israelis had voted for Netanyahu.

Never mind that we weren’t blessed with bliss pre-Netanyahu. Clinton himself failed miserably to garner glory by brokering agreement over a decade ago. He had summoned then-PM Ehud Barak and then-PA honcho Yasser Arafat to Camp David in 2000 in an imperious bid to impose his solution upon them. He twisted Barak’s arm to agree to cede everything including Jerusalem’s Jewish Holy of Holies (save – no kidding – for subterranean strata of the Temple Mount).

But, despite the egregious largesse, Arafat refused and launched another intifada – a bloodbath that cost over 1000 Israeli lives about whom Clinton never had much to say. He still avoids dwelling on the human toll of his officiousness.

During a recent roundtable with bloggers on the sidelines of the Clinton Global Initiative, he unabashedly blamed Netanyahu for not subscribing now to the terms of that monumental Camp David flop of 11 years ago.

The PA’s knuckles aren’t rapped. It’s even praised as “the finest Palestinian government they’ve ever had in the West Bank.” Curiously Clinton avoided noting that in 2008 Netanyahu’s predecessor, Ehud Olmert, improved on Barak’s offer but got no peace either.

To be fair, Netanyahu wasn’t the only culprit named by the unreconstructed Clinton.

The former White House tenant even takes God to task for allowing Yitzhak Rabin to be assassinated and Ariel Sharon to suffer a debilitating stroke. Presumably, had it not been for divine sabotage, Clinton might have trumped the Almighty.

But the core impediment to Clinton’s ambitions is the Israeli collective. The troublesome makeup of our population facilitated the formation of Netanyahu’s government in the first place. Most contrary among Israelis are “all these immigrants coming in from the former Soviet Union, and they have no history in Israel proper, so the traditional claims of the Palestinians have less weight with them.”

But, hey, haven’t we heard it all before? Isn’t this the nudnik’s oft-kibitzed refrain? Just a year ago Clinton let us know that his problem is the composition of Israel’s population. It’s who we are that gets his goat.

According to Slick Willy’s astute analysis circa 2010, immigrants constitute “the hardest- core people against a division of the land. This presents a staggering problem. It’s a different Israel. Sixteen percent of Israelis speak Russian.”

Arab potentates probably agree and would like to be rid of “Israel’s Russians” as much as of any trace of Jewish presence in this land. Yet their genocidal hate and terror-mongering aren’t censured by Clinton as obstacles to peace.

Among the foremost obstacles cited in his previous kibitz was the fact that “an increasing number of the young people in the IDF are the children of Russians and settlers.” Moreover, it’s not that he’s pleased with the “non-Russians” either.

“Moroccans,” he yammered, are too “right-of-center,” even if not quite as disruptive an element as Russians. The Moroccans’ desire for “normal lives” (presumably as distinct from Russians), he pontificated last year, can turn them into “swing voters,” who might support the Israeli party of Clinton’s choice.

Clinton’s unconcealed overbearing intrusion into a fellow-democracy’s internal processes is of course nothing new. He was always unabashedly partial to Israel’s Left – our sole tolerable political component, to judge by Clinton’s none-too-objective past rhetoric and record.

Back in 1999 Barak was his outright favorite and Clinton spared no effort to help him defeat Netanyahu. Indeed Clinton did for Barak what few American presidents ever dared openly do even for their most promising foreign protégés.

Clinton pulled out all stops in his barefaced intervention in Israel’s domestic politics – in a fashion unseen since the CIA’s blatant interference in Italy’s post-WWII election. Brashly, Clinton didn’t even bother to cover up his tracks but dispatched his own spin doctors, private pollsters and campaign strategists to boost Barak.

Clinton could hardly contain his glee after Barak’s 1999 win. On the eve of Barak’s first Washington visit as PM, the eager American host quipped that he’s “as excited as a kid awaiting a new toy.” It was pretty demeaning to look upon the leader of an allied independent state as a plaything but, with incomparable chutzpa and outrageous meddling, Clinton made Barak’s battle his own.

Now Clinton echoes assorted self-promoted experts (generally with axes to grind) who rationalize that it’s not the Israeli Left’s policies which were its downfall, but the electorate’s composition. Clinton blames Israel’s objectionable voters for frustrating his wishes.

It may be childish, churlish and petulant but it’s essentially the familiar psychological phenomenon of transference.

Had he not been raised high on the pedestal of statesmanship and omniscience, Clinton’s bizarre gibberish might all be chalked up to personal hang-ups. However, as in Jimmy Carter’s case, asinine humbug gains inordinate currency when spouted by exalted, supposedly super-savvy senior luminaries. It therefore sways more impressionable minds and is exploited to greater effect by unscrupulous propagandists than would otherwise be the case.

Clinton’s careless prattle might, albeit perhaps unintentionally, delegitimize aliya just as much as Jewish settlement has already been delegitimized. Since the advent of Zionism, the Arab subtext had been that whatever betokens Jewish life and vitality in this land perforce undermines justice and harmony. Bottom line priority: weaken Jewish interests in the Jewish homeland.

In the existential contest forced upon Israel, the stakes are literally our lives. Compulsive kibitzers who insist on periodically impressing our imperiled citizenry with their peerless perception are more than an infuriating distraction.

The nudnik kibitzer’s most exasperating habit is throwing players off their game with cock-and-bull chatter precisely at the most crucial moment of greatest concentration.

Kibitzers aren’t always comical, especially not in a danger-fraught fight for survival.