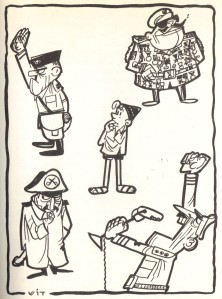 Most Israeli news-consumers were highly unlikely even to have detected any fleeting resemblance between Abbas’s three “no’s” and the three “no’s” enunciated so bombastically in Khartoum exactly 44 years and one day ago.

Representatives of all Arab League members and the PLO hobnobbed in Sudan on August 29, 1967, soon after the Six Day War. On September 1, they published their resolution, popularly dubbed “the three no’s”: “no peace, no recognition, no negotiation with Israel.”

It would serve us well to recall that this was when Israelis delusionally awaited, as Moshe Dayan phrased it, “a phone call” from Arab leaders. We sincerely convinced ourselves that given the new circumstances in the region, there’s no alternative for the Arab world but to shake off its refusal to accept Israel and to effect a lasting reconciliation.

Had the Arabs operated according to our patterns of logic, this indeed should have been the outcome. But the idealistic expectations that our enlightened rationale would guide the reactions of others were (and, alas, still are) pie-in-the-sky. Then-foreign minister Abba Eban promised we’d be “unbelievably generous in working out peace terms.” In direct talks with official Arab interlocutors, he stressed, “everything is negotiable.”

This past August 27, two days short of the anniversary of the Khartoum summit’s opening, Abbas chose to echo its rejectionist sentiments. He announced three “no’s” of his own: no to recognizing a Jewish state, no to tolerating Jewish settlement blocs and no to forgoing the demand that Israel be overrun by untold millions of hostile Arabs (marketed to all and sundry as the Right of Return).

This is all fundamentally significant, not least because we find ourselves at the outset of what we’re told will be a fateful September – the month in which a great tsunami will violently engulf us both in the diplomatic arena (at the UN General Assembly) and right on our own turf (via orchestrated terror campaigns touted as grassroots demonstrations).

Abbas has just definitively defined what it’s all about, even if we were distracted and loath to listen to him – as we almost always are.

Speaking on the eve of a last-ditch EU meddling effort geared to initiate another negotiation round before Abbas’s projected UN extravaganza, he set conditions. He’ll agree to talks if their outcome is fully determined a priori and imposed on Israel.

He’ll send his representatives to palaver with Israeli negotiators if Israel consents beforehand to shrink back to the 1949 armistice lines and if it ceases forthwith all “settlement” construction, including in beyond-Green-Line Jerusalem neighborhoods. The construction freeze, needless to emphasize, applies to Jews only – in the spirit of goodwill to all men (except for some).

This, in effect, is Abbas’s counterpart to Khartoum’s no-negotiation stipulation. Abbas has set up a hurdle so high that it becomes unsurpassable and thereby makes further negotiations unfeasible.

Next comes Abbas’s present-day equivalent to Khartoum’s no-recognition proviso. While not identical in wording, its bottom line is no different from its 44-year-old prototype. Abbas repeated insolently that recognition of Israel as a Jewish state is out of the question – not now, not ever, no way, nowhere, under no condition.

This isn’t a semantic quibble. It means refusal to accede even to the 1947 UN Partition Resolution minimum, which determined that the Jewish people deserve a state. To crush said resolution, seven Arab armies attacked newborn Israel but lost, triggering their piteous lamentations to this day.

As long as the very notion of the rightful existence of a Jewish state is denied, the irredentist ambition to eradicate Israel as a Jewish state will fester and rule out even a remote likelihood of lasting peace.

The Arabs’ current tactic is to admit that a state called Israel is a reality in their midst, even if an unwelcome one. But current realties can be changed. If Israel is judged as illegitimate, then the temptation will forever remain to eliminate this illegitimacy. Hence refusing to accept the rightful existence of a Jewish state is nothing less than proclaiming the intention to keep on challenging and destabilizing it till a more convenient opportunity presents itself to wipe it off the map altogether.

This is a potent, dominant and recurring Arab theme – not pedantic hair-splitting by a deliberately obstructionist Israel. Herein lies nothing less than the core issue. At stake isn’t the creation of a second Arab state in original Palestine (Jordan, occupying some 80% of the British Palestine mandate territory, being the first).

What actually hangs in the balance is the ongoing survival of the Jewish state. The Palestinian ploy, in fact, is nothing but a weapon to wield against the Jewish state, foremost by disguising the antagonistic aims against it.

Yesteryear’s uninhibited bluster about throwing the Jews into the sea was a public relations flop. However, the reverse is true for the new-style upmarket prattle that portrays Jews as ogre conquistadors who deny the ancient Palestinian nation the self-determination forcibly usurped from it.

This canard goes over big. It seemingly doesn’t offend liberal niceties, while appealing to the postmodern zeitgeist and to that latent Judeophobia still lurking sinisterly throughout Europe.

How will this veiled plot to obliterate Israel be carried out? Here we arrive at Abbas’s third “no.” His tool will be the Right of Return, i.e., the right uniquely reserved for assumed descendents of so-called Palestinian refugees to inundate Israel. This will render it ripe for full Arabization, shorn eventually of any shreds of Jewish identity – down to the last vestiges, like its name, emblem, flag and national anthem.

We won’t even raise the macabre specter of bloodshed. Little imagination is demanded of anyone who knows the history of this country since the mid-19th century and the accompanying shouts of itbah el-yahud (slaughter the Jews).

Finally, the rejection of settlement-bloc compromise should squash any lingering pipe dreams among Israelis hoping that it’s possible to reconcile Abbas’s insistence on the 1967 demarcations with Israel’s inability to again compress itself, ever-vulnerable, into those existentially threatening confines.

Abbas delivered an inconsiderate kick in the teeth to those of us who clutch at hallucinations about land-swaps that would leave us with significant settlement blocs.

His non-start preconditions are that we squeeze ourselves back into what super-dove Eban dubbed “the Auschwitz lines,” that we forget about Jewish state legitimacy and that we agree to the Arab takeover of the defenseless-cum-illegitimate entity provisionally going under the name of Israel.

Remember, besides rudely spurning Israel’s outstretched hand in 1967, the Khartoum conferees underscored their three “no’s” by reaffirming “the Palestinians’ right to regain the whole of Palestine,” i.e., destroy the State of Israel.

That was precisely Abbas’s message last week – albeit in somewhat more discreet words. Still, what was, is what is –even if we don’t like it.

5 thoughts on “Another Tack: Khartoum’s three ‘no’s’- the Ramallah version”